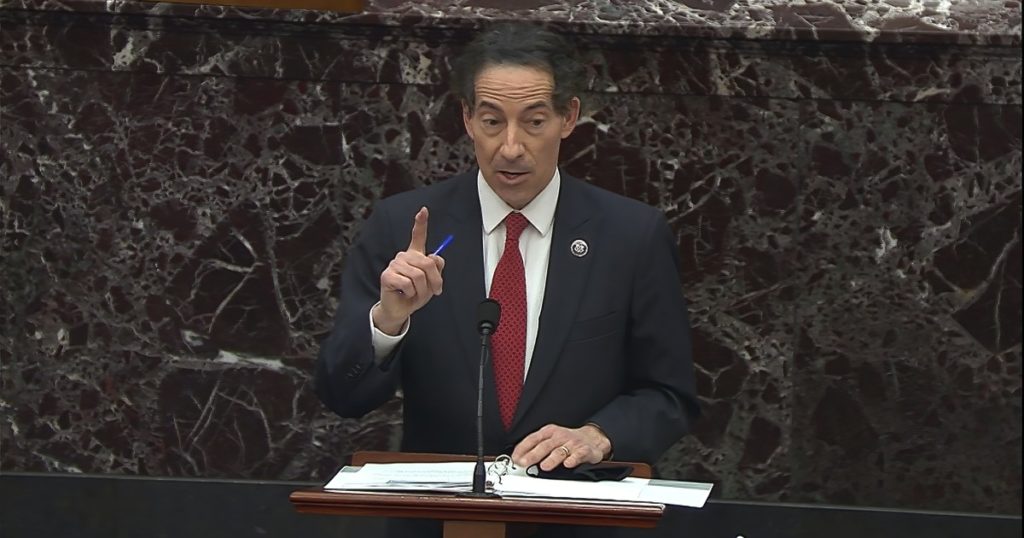 The battle to shape the legacy of former President Trump moves into its second day Wednesday with House prosecutors still professing hope of winning over Senate Republicans, but also looking beyond their immediate audience to the wider American public.

With video evidence that they said would reveal previously unseen details of what occurred during the Jan. 6 invasion of the Capitol, Democrats hope to present what one aide to the impeachment team described as a “devastating” case of Trump’s complicity in the riot. The new evidence could include video from security cameras in the Capitol, Democrats said.

“There’s going to be new coverage that no one has seen, and it will provide new insight into both the extreme violence that everyone suffered, the risk and the threat that it could have led to further violence and death,” a senior aide to the impeachment team told reporters Wednesday. The evidence “shows really the extent of what Donald Trump unleashed on our Capitol,” said the aide, one of three who spoke to reporters under ground rules that don’t allow use of names.

The impeachment managers plan to lay out their case during eight hours of argument on Wednesday and at least several more hours on Thursday, the aides said. The evidence they plan to present will cover not only Trump’s words and actions on the day of the riot, but what he did in the weeks leading up to it, all of which created the conditions that led to the riot, the House prosecutors plan to argue.

“Jan. 6 was the culmination of his conduct, not the beginning of it. He inflamed his base leading up to it with words of violence that he knew they were capable of committing on his behalf,” an aide said.

The prosecutors have a dual audience.

Their immediate target are the senators sitting in front of them, evenly divided by party. Because conviction in an impeachment case requires a two-thirds vote, they would need to win 17 Republicans, assuming all Democrats vote against Trump. At this point, the number of Republicans willing to vote against Trump appears to be no more than half that.

But beyond the Senate, Democrats know that the arguments and, in particular, the video evidence they’re presenting, can reach a broader public. They have invested heavily already in an effort to convince voters that Trump and the Republicans who support him have sided with extremists, and further evidence of Trump’s complicity in the riot will reinforce that connection in voters’ minds, Democratic strategists believe.

On Tuesday, the lead impeachment manager, Rep. Jamie Raskin (D-Md.), began presenting the evidence by showing senators a 13-minute video which provided a timeline of events on the day of the attack, splicing together scenes of Trump speaking to followers with the violent events that followed. The video came as Raskin and his colleagues successfully argued that the Senate had the authority under the Constitution to try Trump even though he no longer holds office.

The presentation drew praise — although not votes — from several Republican senators who support Trump but who said the Democrats had presented an emotionally compelling case. By contrast, senators panned the presentation by Trump’s defense lawyers. The former president was also unhappy with the arguments, according to people familiar with his thinking.

In the end, only six Republican senators joined the chamber’s Democrats in voting to proceed with the trial. But Democrats were encouraged that they had picked up one vote. Late last month, in a procedural test vote, only five Republicans voted to let the trial proceed.

Sen. Bill Cassidy (R-La.), the one Republican who changed his vote, cited the quality of the Democratic presentation as he explained his stand.

“If I’m an impartial juror, and I’m trying to make a decision based on the facts as presented on this issue, then the House managers did a much better job,” he told reporters.

Democrats said Wednesday that the impeachment managers are realistic about the political barriers they face, but still optimistic.

“We believe in the power and the strength of the overwhelming evidence in this case. And we believe that that evidence still has the power to persuade reluctant Republicans who were just now waking up from the grip of the former president,” one aide said.

“We see other indications of movement from the Republicans. The managers are going to go in and they are going to move hearts, minds, I think the consciences of 100 jurors — none of whom have voted yet. And we fully expect to prevail in the end,” the aide said.