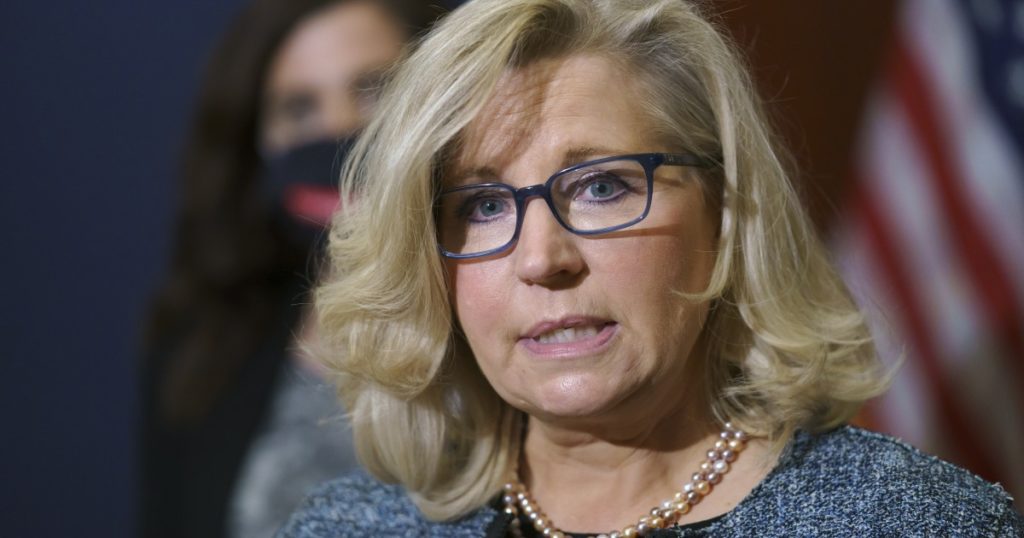 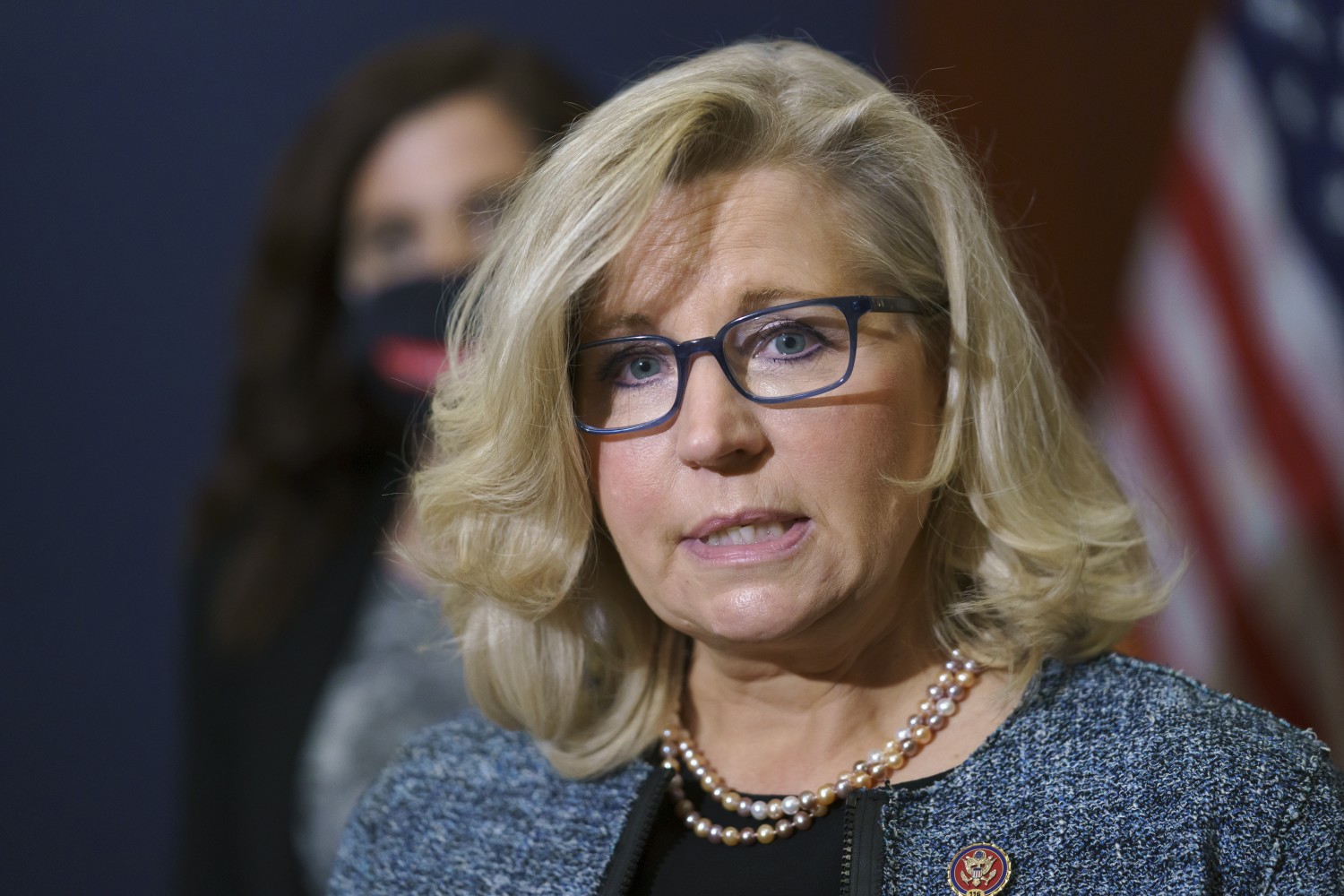 Three months ago, House Minority Leader Kevin McCarthy helped quell a small protest against Rep. Liz Cheney, one of the Republican Party’s most vocal opponents of former President Trump, declaring the GOP a “big tent” that was broad enough to include dissenting voices.

But that tent is expected to deflate as soon as Wednesday, when House Republicans led by McCarthy (R-Bakersfield) hold a vote on whether to preserve the Wyoming lawmaker’s role as the No. 3 Republican leader in the House.

After months of trying to coexist with Cheney as leader of a party that is largely aligned with Trump — and his lies about election fraud that fueled the Jan. 6 Capitol insurrection — McCarthy is now the one helping build a case for her removal from her leadership job. She is expected to lose a simple majority vote conducted by secret ballot.

“We represent Americans of all backgrounds and continue to grow our movement by the day. And unlike the left, we embrace free thought and debate,” McCarthy wrote in a letter to House Republicans on Monday. “But our leadership team cannot afford to be distracted from the important work we were elected to do and the shared goals we hope to achieve. The stakes are too high to come up short.”

McCarthy quickly moved to build support to replace Cheney with Rep. Elise Stefanik (R-N.Y.), a rising star in the party and outspoken backer of Trump, whose endorsement she quickly received. But some conservatives are crying foul, accusing leadership of moving too quickly to coronate a lawmaker who, despite her support for Trump, has a relatively moderate voting record — in contrast to Cheney’s consistently conservative voting record.

The removal of Cheney, which is widely expected, and the election of Stefanik — which has less certainty though she has no declared opponents — represent a hardening of McCarthy’s leadership team‘s public alignment with Trump, and a sharpening contrast with Cheney.

“Today, we face a threat America has never seen before,” Cheney said Tuesday, making her case to a largely empty House chamber. “A former president who provoked a violent attack on this Capitol, in an effort to steal the election, has resumed his aggressive effort to convince Americans that the election was stolen from him. He risks inciting further violence.”

Cheney has consistently countered Trump’s false statements that the election was stolen and that President Biden was not rightfully elected. Trump’s role in stoking the insurrection is grounds for the party to permanently break with him ahead of the 2022 and 2024 elections, she says.

But Cheney’s opponents within the House Republican conference say her insistence that the election was not stolen is stoking party divisions and damaging the party’s efforts to combat Biden’s agenda.

Cheney’s departure would mark the most substantial removal of a Trump opponent from the GOP ranks and the deepening of a fissure among Republicans. And her removal underscores the power of the allegiance House Republicans — unlike their Senate counterparts — still show Trump.

Stefanik, for her part, says she will focus on keeping Republicans on the same page as “one team.”

“My vision is to run with support from the president [Trump] and his coalition of voters, which was the highest number of votes ever won by a Republican nominee in 2020. We’ve expanded the party,” she said recently on Stephen K. Bannon’s “War Room” podcast. “I’m committed to being a voice and sending a clear message that we are one team, and that means working with the [former] president and working with all of our excellent Republican members of Congress.”

In February, Cheney survived a threat to her leadership position. With the support of McCarthy and other GOP leaders, she was able to hang onto her post. Since then, as Cheney continued to speak out against Trump‘s falsehoods about a rigged election, the quiet whispers to oust her only grew.

Trump’s support among House Republicans, strong even in February, has only grown since then. And with the chance of retaking the House majority next year staring them in the face, many rank-and-file members feel as though they have no way back without the former president’s support — or least not with his active opposition.

“You can’t erase Donald Trump or his voters from the GOP and expect to win back the majority in the midterms,” tweeted Rep. Jim Banks (R-Ind.), chairman of the conservative Republican Study Committee and an ally of McCarthy.

There are plenty of other Republicans who disagree with the idea of Trump’s electoral prowess in the 2022 midterm election, in which he will not be on the ballot. “Expelling Liz Cheney from leadership won’t gain the GOP one additional voter, but it will cost us quite a few,” tweeted Sen. Mitt Romney (R-Utah), also a critic of the former president.

And other Republicans question whether the House should remove a member who takes a different position on Trump.

“Cancel culture is cancel culture, no matter how you look at it,” said Sen. Joni Ernst (R-Iowa). “I support President Trump and his policies, so I have a slightly different view [from Cheney] on that, but I still think we shouldn’t be trying to cancel voices.”

Rep. Adam Kinzinger (R-Ill.), a strong supporter of Cheney’s who is equally vocal in denouncing Trump’s role inciting the insurrection, said his fellow Republicans are removing Cheney because her position as a truth-teller forces them to defend their position that the election was stolen.

“Cheney is making it uncomfortable for them,” Kinzinger said at an event this week with the National Press Club. “When she’s asked about it, she doesn’t dance around. She just says the election wasn’t stolen, Biden is president, and Jan. 6 was a Trump-inspired insurrection. And that now gins up your local media again, you’re going to have to answer it. And she’s made it uncomfortable.”

Cheney, for her part, has expressed no reservations over her decision to tell the truth about the election, even if it costs her the leadership job.

“History is watching. Our children are watching,” she wrote in a Washington Post op-ed. “We must be brave enough to defend the basic principles that underpin and protect our freedom and our democratic process. I am committed to doing that, no matter what the short-term political consequences might be.”

She has not been twisting arms in an attempt to preserve her job, according to other members, acknowledging that most lawmakers have already made up their minds about the truth behind the election and her position. She’s pledged to run for reelection, even as Trump is eyeing which of the several Republican challengers he plans to back in an effort to oust her in a primary.

Cheney’s role in the House Republican Conference, chairwoman, is a somewhat vague job title that reflects her position as the third most senior Republican. Her official duties are crafting the House GOP message and, unofficially, hosting a weekly meeting.

If she is removed in Wednesday’s vote, as expected, the position would be filled in a new election. A candidate forum would have to be scheduled before an election is held. The forum could be as soon as Thursday for a vote on Friday.