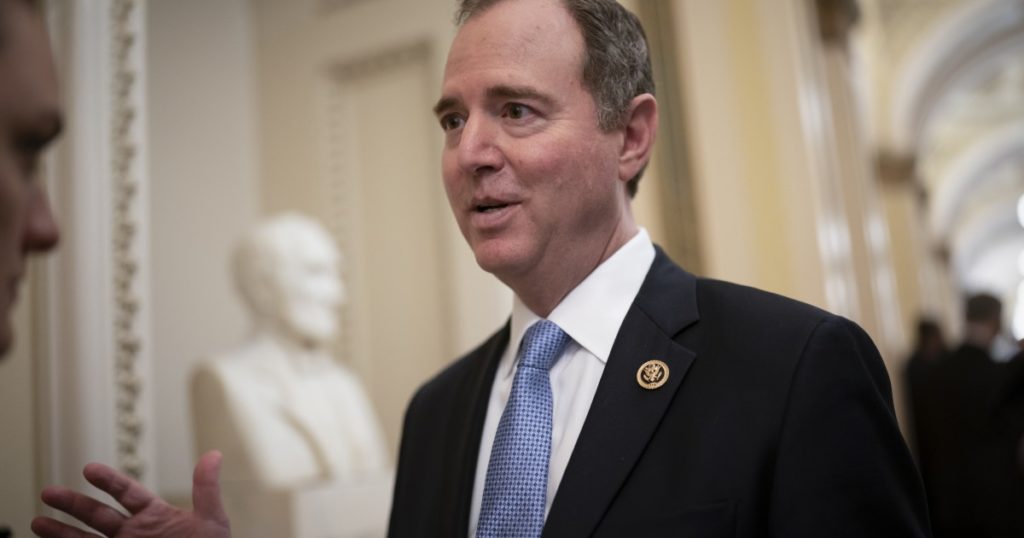 “What we really want to try to communicate during the hearing is what it was like to be on the front lines for these brave police officers, how vastly outnumbered they were, how well militarized the members of the crowd were in terms of the weapons they brought, the gear that they wore, and just what a harrowing, terrible experience it was for these officers,” Rep. Adam B. Schiff (D-Burbank), a committee member, told reporters Monday.

The committee is tasked with investigating whether white supremacist groups coordinated the attack, what the Trump administration might have known in advance and what intelligence failures led to thousands of Americans being able to successfully overwhelm police and take control of the country’s legislative seat of power for several hours while police pleaded for backup from the National Guard.

The attack sent lawmakers and former Vice President Mike Pence fleeing to safe rooms and delayed the certification of President Biden’s win in the electoral college. At least 140 officers were injured — some permanently. Damage estimates exceed $1 million and five people died either in the melee or in the hours after, including a police officer. Two officers died by suicide in the days after the attack.

Some of the footage shown Tuesday will show graphic violence, a committee staffer warned.

While some might be familiar to those who have closely watched court cases or other House hearings, “for the viewing public, most of it is going to be new,” Schiff said.

Tuesday’s hearing is the first step in what is expected to be a months-long investigation. The committee is still working to define the scope of the probe, and to identify what evidence to examine and witnesses to hear from, Schiff said. Some of that evidence might come from the hundreds of criminal cases brought by the Justice Department, with charges including conspiracy and trespassing.

The panel is still not fully constituted after House Speaker Nancy Pelosi rejected House Minority Leader Kevin McCarthy’s selection of Reps. Jim Jordan (R-Ohio) and Jim Banks (R-Ind.) to the panel. She said their past comments supporting the lie that the election was stolen from Trump and downplaying the riot would affect the integrity of the investigation.

Pelosi’s move prompted McCarthy to pull all five of his nominees from the committee. He said that Republicans would not participate unless all of McCarthy’s choices were allowed to join.

Over the weekend Pelosi, who had already appointed Rep. Liz Cheney (R-Wyo.) to the committee, selected a second Republican, Rep. Adam Kinzinger of Illinois.

“I’m a Republican dedicated to conservative values, but I swore an oath to uphold and defend the Constitution — and while this is not the position I expected to be in or sought out, when duty calls, I will always answer,” Kinzinger said in a statement. “This moment requires a serious, clear-eyed, nonpartisan approach. We are duty-bound to conduct a full investigation on the worst attack on the Capitol since 1814 and to make sure it can never happen again.”

At the White House Monday, McCarthy referred to Kinzinger and Cheney as “Pelosi Republicans.” When asked if they would face any punishment for their participation over his objections, McCarthy said, “We’ll see.”

Pelosi has now selected nine of the 13 members on the committee. It is unclear if the remaining seats will be filled. Pelosi hinted on ABC’s “This Week” Sunday that Kinzinger might not be the only Republican she taps, but hasn’t committed to it.

“He and other Republicans have expressed an interest to serve on the select committee,” Pelosi said.

Republican leaders have called the investigation another partisan probe meant to attack Trump, a message Democratic leaders have sought to temper, saying Congress has an obligation to fully investigate an attack on the peaceful transition of power.

Schiff said the committee members are holding planning and preparation meetings as a group, rather than separately as Republicans and Democrats. Cheney will be given time to make an opening statement Tuesday in the place of a ranking Republican member.