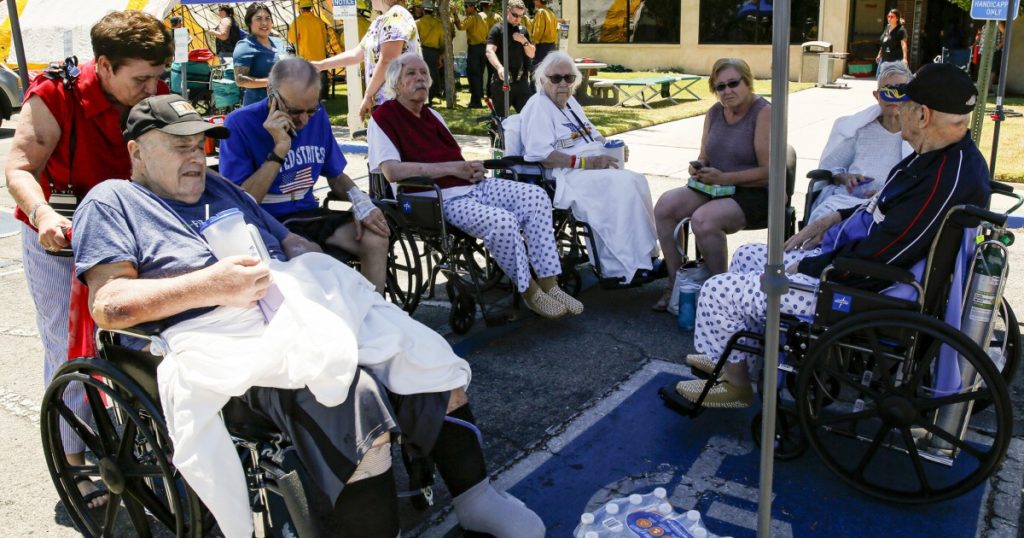 One hour after a 6.0-magnitude earthquake struck Northern California on Thursday, the California Hospital Assn. tweeted that it’s “time to to update seismic standards — to focus on all the services people need after a disaster of any kind.”

But the association’s tweet omitted that its proposal circulating in the state Capitol would actually weaken existing standards, giving hospitals another seven years — until 2037 — to ensure that their buildings remain operable after the Big One and limiting the required upgrades to buildings that support emergency services.

Nor did the tweet mention that Gov. Gavin Newsom’s office, in private negotiations at the state Capitol, has supported the association’s request for more time to do less work, according to multiple sources involved in the discussions in Sacramento who were not authorized to speak about them. Newsom’s office declined to comment.

Debates about hospital building standards aren’t new in California. This time around, they have resulted in an impasse between some of the most powerful forces in state politics: labor unions and hospitals.

The effort to delay legally required seismic upgrades at California hospitals is one of a few remaining issues before Newsom and the Legislature can reach a long-deferred final agreement on the state budget for the fiscal year that began July 1.

Hospitals represented by the association argue that existing seismic standards are too costly, are in some ways unnecessary and that their industry needs more time to recover from massive financial losses during the pandemic.

In a letter to legislative leaders late last month, the association claimed that even with federal aid, California hospitals lost $8 billion in 2020 caring for COVID-19 patients and expect to lose another $2.2 billion this year.

Existing law requires that by 2030, every hospital building is capable of operating following an earthquake.

Without action on their proposal, the association says, the current standard would “further drain billions of dollars from hospitals and — if not modified — is likely to result in hospital closures across the state.”

The association said its proposal could drastically reduce the estimated $100 billion it would cost to complete the seismic upgrades in California.

“This is an important measure for hospitals,” said David Simon, a spokesman for the California Hospital Assn. “We have learned a lot from the pandemic, and flexibility is important, and focusing finite resources on emergencies is important.”

Simon said Newsom is siding not with the hospital association but with sound policy.

“I think the governor is leaning on the lessons of the pandemic to craft good policy moving forward,” Simon said. “This isn’t a safety question. It’s about what services are needed and important during a disaster. What the governor is doing is recognizing sharp modern policy is needed, versus having every building operational after a disaster.”

Democratic legislative leaders have made it clear that any deal to change seismic standards would need the support of labor unions. A large labor contingent that includes the California Labor Federation, California Nurses Assn., SEIU California, the State Building and Construction Trades Council and others remains opposed to the hospitals’ proposal.

Steve Smith, a spokesman for the California Labor Federation, said delaying implementation of the law only increases the likelihood that a major earthquake will occur before upgrades are completed.

“We know a big earthquake is coming,” Smith said. “We know it’s probable it will happen sooner than later. It’s unconscionable that hospitals aren’t trying to meet a deadline set decades ago.”

Smith said labor groups opposed to the changes are “engaging the Legislature and governor’s office on why this is a horrible idea.” He said any time a governor weighs in, it brings new urgency to a proposal.

“Obviously, we have concerns about the proposal,” Smith said. “The California Hospital Assn. has been pushing this a long while, and we are making an especially hard push right now.”

Sources involved in the negotiations said the hospital association and the governor’s office have attempted to pair the delay in seismic upgrades with a push by labor to create the Office of Health Care Affordability, which was included in Newsom’s original budget proposal and would set targets for healthcare costs.

Union advocates say rising healthcare costs continue to be a problem for workers. The Office of Health Care Affordability would be housed within the Office of Statewide Health Planning and Development and staffed by state union workers.

But union groups have refused to support the hospital association’s call to change building standards, even if it means the Office of Health Care Affordability is put on hold.

“This is not the time for another disaster,” the group wrote over a picture on Twitter showing the collapse of the Olive View Medical Center in the 1971 Sylmar earthquake, which prompted a state law on seismic standards for new hospital buildings.

The hospital association spokesman called the tweet “frustrating” and said it was unfair.

More than 95% of hospital buildings in the state have met seismic standards under a 1994 law aimed at ensuring that none of them collapse during a major earthquake. That law was passed after the Northridge earthquake that year, which caused serious damage to hospitals. The remaining hospitals that have not met that standard will be updated by 2025, the association said.

A separate standard under the same law — requiring that by 2030, hospital buildings are capable of providing services and remaining operational following an earthquake — is what the association is seeking to delay and scale back. The association said nearly two-thirds of California hospitals have not met the goal.

Under the hospital association’s proposal, only emergency departments and related services needed during a disaster would be required to undergo the added seismic standards, with an additional seven years to comply.

Previous efforts to change the law’s requirements, including a bill last year, have failed in the Legislature.

“What’s different this time, and what’s unfortunate, is the hospital association is taking a failed legislative attempt and using the budget process for their end goal,” said Stephanie Roberson, a lobbyist with the California Nurses Assn. “The process is being abused here. The Legislature has spoken. There should be a hard stop.”

With the recall election of Newsom on the horizon, the governor’s support of the association’s request to delay the work could backfire for him in the short term, said Larry Gerston, professor emeritus of political science at San Jose State University.

Gerston, who is writing a book about the recall, said its proponents have been combing Newsom’s background and his everyday activities to use anything that may support the case they’re making to the public that the governor can’t be trusted.

“Once this becomes public, I think these guys are going to jump on it, not as the issue, but another example,” Gerston said. “They keep poking, and Newsom helps them poke. There’s just been a slew of unforced errors, and they seize on every one of them.”