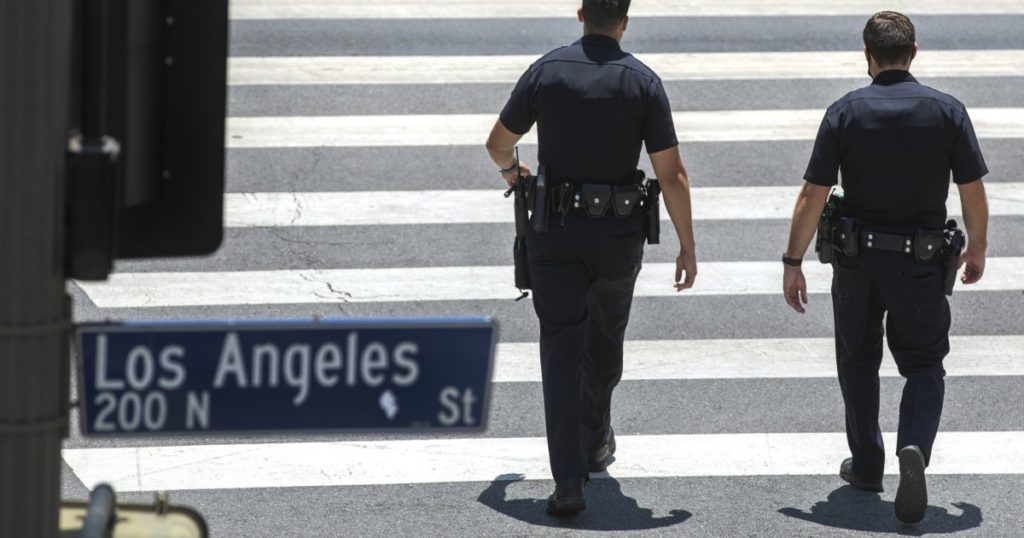 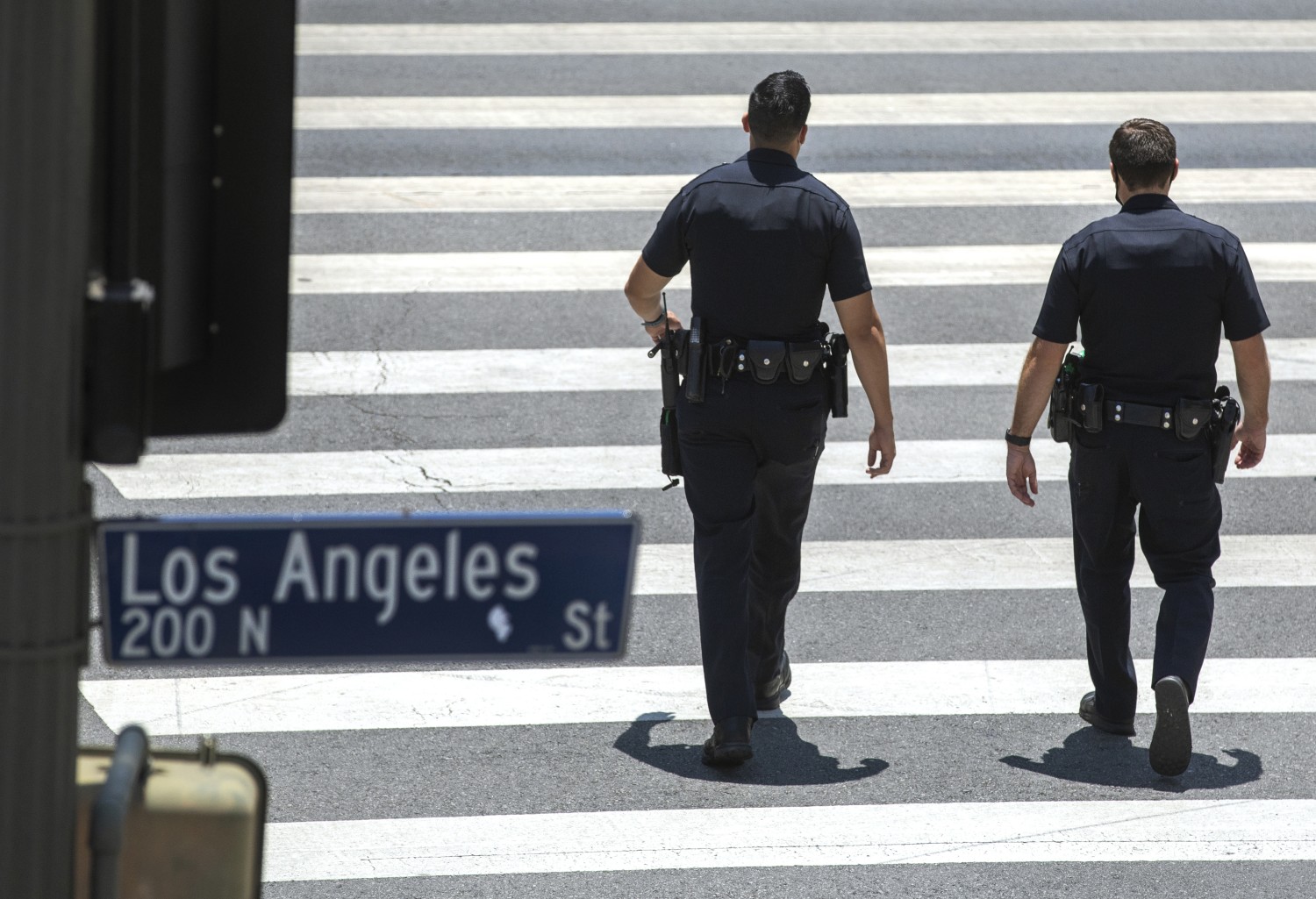 If anyone has a legitimate reason to want the city — indeed, the country — to be tougher on crime, it would be William Gude.

On a recent Tuesday afternoon, his son, Marcelis, was gunned down on a sidewalk in South L.A., in what friends and family believe was a case of mistaken identity. An 8-year-old girl, who happened to be riding her bike nearby, was also hit.

But now his tweets are mostly about figuring out ways to stop other young Black men from sharing his son’s fate — particularly as rates of homicide and violent crime continue to climb, both locally and nationally, and the political conversation over what to do about it has taken on new urgency.

And yet, after months of protests over police brutality, we’re somehow back to 1990s-esque calls to fill American streets with police officers.

For this we can blame Republican politicians and police unions, which have conveniently used the sharp increase in killings to undermine legitimate efforts to reform police departments in large, mostly Democratic-led cities.

Of course that spike in deadly shootings and other violent crime is happening in cities with Republican leadership as well, and it began while President Trump was in office. But that hasn’t stopped GOP politicians and their union allies from arguing that tough-on-crime policies and more cops are the only way to stop the bloodshed — an assertion that’s questionable at best.

They insist that requiring more oversight of police departments and reallocating funding to social services agencies, as Oakland just did, means Democrats are somehow being soft on crime. As the National Fraternal Order of Police recently tweeted: There are “people across the country who now live in fear of being gunned down. It’s time to stand up and #DefendThePolice.”

Unfortunately, President Biden took the bait and released a plan last week to crack down on guns and violent crime — a politically fraught exercise given his championing of the disastrous 1994 crime bill as a U.S. senator.

Among other things, he said Wednesday that state and local governments could use funding from the American Rescue Plan to hire back enough police officers to reach pre-pandemic levels, pay overtime for community policing and invest in violence intervention.

“This is not a time to turn our backs on law enforcement or our communities,” Biden said from the White House.

Those weren’t the words that many on the progressive left wanted to hear. That includes Gude.

Like the president, he attributes the uptick in homicides to emotional and economic trauma from the COVID-19 pandemic, which hit Black and Latino communities particularly hard. Indeed, gangs in South L.A. have driven much of the spike in shootings in Los Angeles, which as of last week had recorded 162 homicides this year, compared with 129 during the same period last year.

But unlike Biden, Gude sees no reason to hire more police officers in L.A. because that won’t address the root of the problem.

“The root problem comes from economic reasons related to COVID. We need to address those economic reasons first,” he said. “If they want to add more cops and increase the budget, that’s another dollar that can’t go to nonprofits or preventative programs.”

Crime intervention programs, in particular, are crucial to preventing the cycle of violence and retaliation that’s behind so many murders, even though such programs receive far less funding than most law enforcement agencies in California.

Gude uses himself as an example. Hours after Marcelis was killed, he told me, he was ready to commit murder.

“I got to the car. I messaged a friend. I told him I needed three guns. I was gonna find out whoever is responsible. I didn’t want to live anymore, so I was just gonna go walk through the community, and every gang member, I was just gonna take each one of them out, one by one.”

But Gude said he took a wrong turn trying to leave the hospital’s parking lot. Then his brother called and asked him to come back inside. They talked and Gude calmed down.

“My point is I’m a 46-year-old man. I own a pretty decent financial company. I’m a pretty reserved guy, somebody that preaches to stay calm under pressure and think things through,” he said. “I have family. Lots of loved ones that I care about that depend on me. And even I was willing to throw that away to go get retribution.”

He questions what a teenager who leads a far rougher life and has much less to live for would do in that situation.

“Do you think they care if there’s an extra patrol car on the street? Like literally no one says that.”

A recent poll conducted on behalf of the Atlantic found that 6 in 10 Americans see violent crime as a major issue. Nationally, homicide rates in large cities rose about 30% last year and an additional 24% this year.

But that same poll also found that 45% of Americans think police budgets should remain flat, while 39% said cities should spend less and 16% said they should spend more.

Public opinion has remained remarkably steady since last summer. During the height of the protests over the murder of George Floyd by Minneapolis police, 42% of Americans said they supported keeping spending on police the same, 31% wanted it to increase and 25% wanted it to decrease, according to the Pew Research Center.

In other words, just because most Americans don’t want to defund the police, that doesn’t mean most Americans want to throw more money at the police as some sort of solution to violent crime.

It’s not just Gude. Politicians, particularly in California, would be wise to remember that.

We don’t have to double down on the tough-on-crime policies of the 1990s out of fear. It is possible to have safer streets and fewer cops working for reformed police departments.