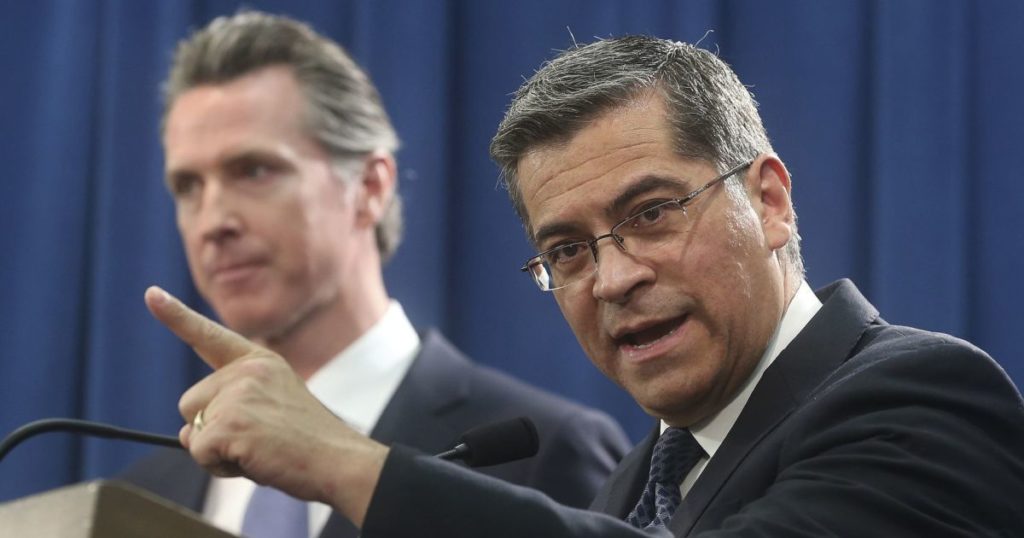 The selection of California Atty. Gen. Xavier Becerra for a post in the Cabinet of President-elect Joe Biden provides Gov. Gavin Newsom a chance to make a plum appointment but also puts him under pressure from many of his progressive allies to pick a successor willing to overhaul a criminal justice system that is under attack for being overly punitive and discriminatory.

Biden announced Monday that he has picked Becerra to serve as Health and Human Services secretary. If Becerra is confirmed by the U.S. Senate early next year, Newsom will appoint a new state attorney general to serve out the nearly two years remaining on the current term.

Groups that have the governor’s ear are already talking about what they would like to see in the next attorney general, including someone who will take aggressive action on criminal justice reform, police accountability, gun control and the environment.

The appointment will be made while tensions are still simmering from nationwide protests and calls for a shakeup of the criminal justice system following the death in May of George Floyd, a Black man, while in police custody in Minneapolis.

Newsom is under pressure to appoint a person of color and someone who has shown leadership on changing the criminal justice system to be more accountable and transparent, issues that Becerra was sometimes criticized for lagging on.

“People across this country understand that 40 years of a heavily punitive, disenfranchising system has not panned out,” said Cristine Soto DeBerry, executive director of Prosecutors Alliance of California, a recently formed nonprofit advocating for criminal justice reform.

DeBerry, who worked as Newsom’s deputy chief of staff when he was mayor of San Francisco, expects the governor to appoint an attorney general with a modern, progressive perspective on criminal justice — rejecting the tough-on-crime attitude that prevailed in California through the end of the 20th century.

While a representative of Gascon said he is committed to serving as D.A., others who may be considered to become attorney general, political experts say, include Contra Costa County District Atty. Diana Becton, San Francisco City Attorney Dennis Herrera and Sacramento Mayor Darrell Steinberg.

Newsom could look in the state Legislature at Democrats including Assembly members Lorena Gonzalez of San Diego, David Chiu of San Francisco and Rob Bonta of Alameda.

Others mentioned as possibilities include Democratic Reps. Ted Lieu of Torrance, Ro Khanna of Fremont and Adam Schiff of Burbank, although the tight margin of Democratic control in Congress could persuade Newsom not to appoint one of those lawmakers, experts say.

The attorney general is widely seen as the second-most powerful elected state official after the governor. The person who serves in the office oversees more than 4,500 lawyers, investigators, sworn peace officers, and other employees of the California Department of Justice.

The attorney general defends the state in court, serves as legal counsel for state offices and agencies, helps local prosecutors and police agencies with criminal investigations, serves as a watchdog on police misconduct and provides forensic science services.

The push for criminal justice reform throughout the country will be one of the biggest challenges for the next attorney general, said Dan Schnur, a professor at the University of California Berkeley’s Institute of Governmental Studies.

Becerra has been a constant antagonist to Trump policies, suing the administration more than 100 times since Becerra’s 2017 appointment over issues including healthcare, immigration and the environment. The budget for the state Department of Justice to handle federal litigation ballooned from $3.6 million in 2017 to $16 million last year.

“With a changing federal administration, the new attorney general will not have to focus on fighting the federal government and can focus on protecting California consumers from predatory practices, and protecting the environment,” Stone said.

State lawmakers and activists have stepped up the pressure in the last year for the attorney general to investigate many more cases of excessive police force in a state where local prosecutors often do not charge officers with crimes for causing serious injuries and deaths. This year, state lawmakers passed a law requiring the attorney general to investigate any incident in which a law enforcement officer kills an unarmed civilian.

Becerra has declined some calls for investigations in the past, saying he did not have the resources to get involved in examining all controversial uses of force.

Pivoting from the courtroom would provide the next attorney general with an opportunity to redistribute resources to other priorities, officials say. Activists said they would like to see the next attorney general do more on the issue of mass incarceration by working to eliminate determinate sentencing, three-strikes laws and sentence enhancements.

The attorney general also could help move the state toward ending cash bail despite voter rejection of the idea in Proposition 25 last month, as well as make public more data on law enforcement problems such as use of force, activists said.

The next attorney general will also face the challenge of defending the state’s gun control laws against a barrage of lawsuits by the National Rifle Assn. and other groups at a time when Trump’s judicial appointments have moved the courts to the right on gun issues, said Hannah Shearer, litigation director for the Giffords Law Center, a group that supports tough gun laws.

“The incoming attorney general needs to prioritize the just and effective implementation of California’s firearms laws, most importantly including the state’s firearm relinquishment law,” Shearer said.

Environmental protection is also seen as an important issue for the next attorney general. Becerra’s successor should focus more attention on strictly enforcing laws against polluters, said Dan Jacobson, state director of the group Environment California.

“Our next attorney general will need to be California’s top climate cop,” Jacobson said.

When Biden announced his pick of Becerra, a torrent of possible contenders to replace him as California’s attorney general flooded social media and lit up political circles in California and Washington.

Most of the speculation has been focused on well-known Democrats in Congress and the state Legislature, along with a number of county district attorneys in California and Bay Area politicians in Newsom’s political orbit while he served as San Francisco mayor and now as governor.

Dana Williamson, a Democratic strategist who served as then-Gov. Jerry Brown’s Cabinet secretary and a political adviser to Becerra, said the guessing game usually has little bearing on a governor’s decision-making process.

Jordan said he would like the next attorney general to be a person of color and preferably a woman.

Harris’ election as vice president means the governor must also appoint someone to fill her Senate seat, and if he picks Secretary of State Alex Padilla for the Senate as some expect, there could be a third significant office to fill.

State Sen. Maria Elena Durazo (D-Los Angeles), chair of the California Latino Legislative Caucus, said this week that she would like to see Newsom continue the trend of bringing diversity to statewide offices.

“There is an extraordinary field of talented and experienced Latinos and Latinas eager to take on the challenges of these positions,” Durazo said, adding that “it is time that California made history by breaking the glass ceiling on statewide office for Latina public servants.”

The opportunity to make three or more appointments to high-level positions is a boon for the first-term governor, said Parke Skelton, a Democratic political consultant. “It’s enviable in terms of the fact that he gets to put his stamp on California politics for years to come,” Skelton said.

Newsom’s decision also comes with political consequences since whomever he appoints will likely be with him on the ballot in the 2022 election.

“These decisions are hard,” Williamson added. “He wants someone who is fairly aligned with his policy goals. But you then have to let them do their job. The attorney general is an independent person and is going to do what they want to do.”