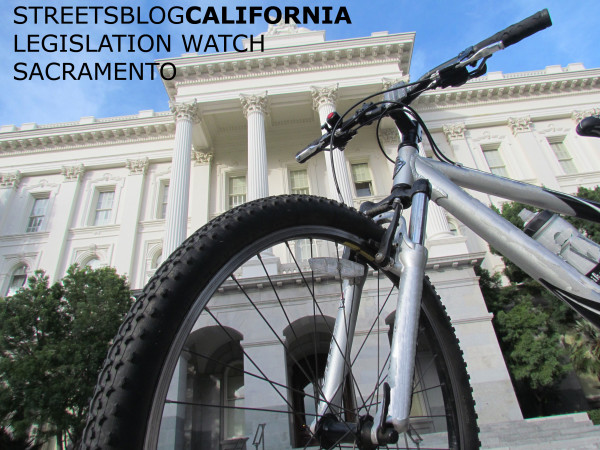 As noted last week, with the legislature now on its summer recess, many pieces of legislation that have not passed through all policy committees are now off the table until next year. Here’s an update on important legislation that Streetsblog has covered and where it now stands. Legislation is listed by bill number with the Assembly Bills listed before the Senate Bills.

Legislation:  A.B. 43  – “Changes to the 85th Percentile Rule”
Status: Passed Assembly. Passed Senate Committees. Waiting on Full Vote in Senate
Description:  A.B. 43, introduced by Asm. Transportation Committee Chair Laura Friedman. begins the process of changing the way speed limits are set, based on recommendations from the Zero Fatalities Task Force of a few years ago. It would make it easier for local jurisdictions to lower speed limits, something that they are currently prevented from doing by the state’s 85th percentile rules.

Legislation: A.B 116, – “Oversight of the High Speed Rail Authority”
Status: DEAD. Did not receive vote in Asm. Transportation Committee.
Description: A.B 116, would have given authority to the Legislative Analyst’s Office to weigh in on and advise the legislature on the development of the high speed rail system and “shared mobility systems statewide.” The LAO already advises the legislature on many matters, emphasizing economic cost-benefit analyses

Legislation: A.B. 122 – “Safety Stop”
Status: Passed Assembly. Passed Senate Committees. Waiting on vote from Senate Appropriations Committee
Description: Assemblymember Tasha Boerner Horvath’s legislation would make it legal for bicyclists to treat “stop signs” as “yield signs” given of course that they are on their bicycle at the time.

Legislation: A.B. 550  – “Limited Use of Speed Cameras”
Status: Passed Assembly and Senate Committees. “Held” by Senate Appropriations Committee.
Description: This legislation would have allowed the use of automated speed cameras. It was killed in the appropriations process.

Legislation:  A.B. 629  – “Seamless Bay Area”
Status: DEAD. On pause until next session.
Description: This was a state bill that aims to lay out a roadmap for the many transit agencies in the San Francisco Bay Area to come together and create a unified system, at least from the perspective of riders.

Legislation: A.B. 773  – “Street Closures and Designations” aka “The Slow Streets Bill”
Status: Passed Assembly. Passed Senate Committees. Waiting on Full Vote in Senate
Description: A.B. 773 , introduced by Asm Adrin Nazarian, would allow cities to close streets to vehicles to keep them safe for other users, thus allowing them to make the pandemic-inspired “safe streets” permanent. While many cities are already moving to build on the successes of the Slow Streets program, this legislation clarifies existing state language to reduce the chances that worthy programs could be held up by legal challenges.

Legislation: A.B.823 – “Ban on Fossil Fuel Powered Trains on High Speed Rail”
Status: DEAD. Did not receive vote in Asm. Transportation Committee.
Description: Would have prohibited the High-Speed Rail Authority from directly or indirectly using local, State, federal, or any other public or private funding to purchase, lease, operate, or maintain a diesel passenger locomotive engine or a passenger locomotive engine that directly emits particulate matter from the onboard combustion of fossil fuels.

Legislation: A.B. 1091 – “Reorganizing Board of VTA”
Status: DEAD, shelved for this year at request of author, Asm. Berman
Description: Would have ordered the reorganization of the VTA Board of Directors.

Legislation: A.B. 1196 – “Sacramento Regional Transit District: board of directors: voting procedures.”
Status: Passed Assembly. Passed Senate Committees. Waiting on vote from Senate Appropriations Committee
Description: The bill “would authorize the board of SacRT to adopt its own voting procedures.” In 2006, the board pursued A.B. 2137 to create a voting system that weighted votes according to how much each jurisdiction contributed financially to SacRT’s budget. A.B. 1196 would allow the board to change voting procedures without asking permission from the state, as long as it follows some basic transparency procedures.

Legislation: A.B. 1238 – “Freedom to Walk”
Status: Passed Assembly. Passed Senate Committees. Waiting on vote from Senate Appropriations Committee
Description: A.B. 1238, by Asm. Phil Ting, which would “decriminalize jaywalking” by making it legal for pedestrians to cross the street mid-block if there is no vehicular traffic coming.

Legislation: A.B. 1401 – “Residential and commercial development: remodeling, renovations, and additions: parking requirements”
Status: Passed Assembly. Passed Senate Committees. Waiting on vote from Senate Appropriations Committee
Description: A.B. 1401, another bill introduced by Friedman, faces a similar path. 1401 was passed by the full Assembly and the Senate Housing Committee earlier this month, but needs a thumbs up from Senate Appropriations. 1401 would prohibit cities from imposing minimum parking requirements on developments near transit, which have led to overbuilt parking and higher housing costs, among other negative outcomes.

Legislation: S.B. 260 – “Climate Corporate Accountability”
Status: DEAD. Cut in Appropriations process.
Description: S.B. 260 was always a bit of a long shot, if also long-overdue: It would have required corporations to track and report their greenhouse gas emissions.

Legislation: S.B. 467  – “Phasing Out Fracking
Status: DEAD. Failed in committee.
Description: S.B. 467, introduced by Scott Weiner and Monique Limón would would have banned all new permits for fracking starting in 2022, and phase the practice out completely by 2027.