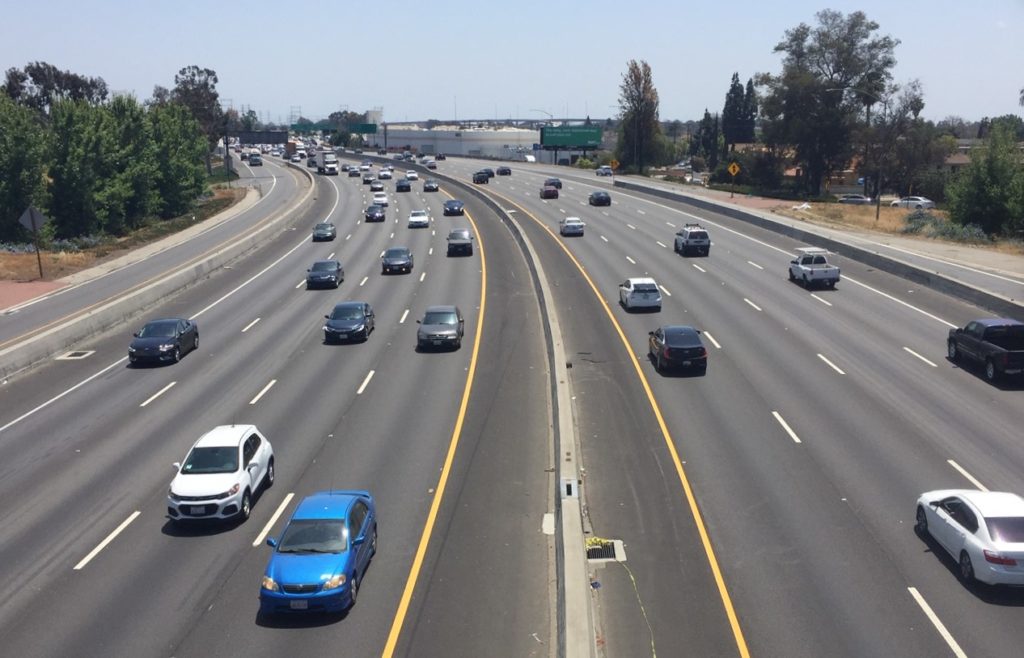 At today’s meeting of the California Transportation Commission, the head of Caltrans, Toks Omishakin, said it was time for his agency to “put an absolute pause” on the agency’s current plans to widen the 710 Freeway.

For decades, Metro and Caltrans have been planning their I-710 Corridor Project to widen about 19 miles of the 710 though southeast L.A. County. In 2018, Metro approved a $6 billion expansion plan that would add two more lanes. This year, the federal Environmental Protection Agency rejected Metro’s 710 plans because they didn’t comply with air pollution laws.

Like you mentioned, this is not just an air quality issue that we’re facing on this project. The [Environmental Justice] issues – potential relocations – to me, are just as potentially problematic.

We’re in a place right now where we want to put an absolute pause on this project in the format that it’s currently in. It is not aligning with the direction … that we are taking the state from a transportation standpoint. It’s plain and simple.

…but what you see in front of you today, in the current format, we will not be moving forward – at least from Caltrans – and I’m sure Metro, they may have to take another vote on this particular project – but from our end, on the state’s side, I don’t see how we can move forward with this project in its current format.

And Omishakin is exactly the person who has the power to put an absolute pause on the project.

According to Metro’s project schedule, presented in January, one of the next steps is for Caltrans to approve releasing the 710 Freeway project environmental studies. Metro has scheduled that approval for Spring – right about now. Omishakin, as the head of Caltrans, can make sure that Caltrans does not approve them.

Omishakin does say that Metro may have to take more steps, even with a Caltrans pause. But Metro hasn’t yet publicly backed off from the current proposed expansion. According to Long Beach Post coverage earlier this week,

“LA Metro is in the process of evaluating the I-710 Corridor Project and the timeline based on the EPA letter, in consultation with Caltrans,” a spokesperson for Metro said in an email Friday.

It is not clear how the Metro board will respond. Despite the EPA letter noting that its concerns were shared with Metro and Caltrans last November, the Metro board has not publicly discussed the 710 Freeway project in more than a year. It is not even clear that the Metro boardmembers were aware of the March 2021 EPA letter.

In recent years, the Metro board canceled the North 710 Freeway tunnel project and reined in some of the excessive home demolitions on the 6o5 Freeway Corridor Improvement Project. Will they do something similar for the lower 710?

One Metro boardmember who has weighed in on this is L.A. County Supervisor Janice Hahn, who represents much of the 710 corridor area. In a statement posted to social media, Hahn wrote critically of Metro’s 710 Freeway plans:

The communities along the 710 have been burdened by pollution for decades and the residents have higher rates of asthma, cancer, and other serious health conditions. We shouldn’t burden these families with more pollution. That is why I pushed for a policy at Metro where any new lanes added to the 710 would only be for zero emissions cars and trucks. This is common sense and I still think that it is a better pathway forward.

The Coalition for Environmental Health and Justice (CEHAJ) has long pushed for a 710 project would center the health of communities in that corridor. Today CEHAJ member East Yards Communities for Environmental Justice Co-Executive Director Laura Cortez responded to Omishakin’s statement: “Caltrans stopping this iteration of the 710 project is a huge win for communities along the corridor. We continue to look to Metro to agree with stopping the current 710 project and co-lead a plan forward with community that is truly zero-emissions focused.”

CEHAJ had urged agencies to re-think the 710 project last week, in a statement responding to the EPA letter:

Caltrans and Metro must start over and work with impacted corridor communities to develop a transformational and modern set of solutions that truly addresses the urgent need to improve local air quality, safeguards housing, businesses, and public spaces, and provides much needed career opportunities for corridor residents. The approach rejected by EPA – of just paving additional truck lanes to stuff more diesel and fossil fuel trucks in our communities – is not a real solution to address our transportation and public health problems.