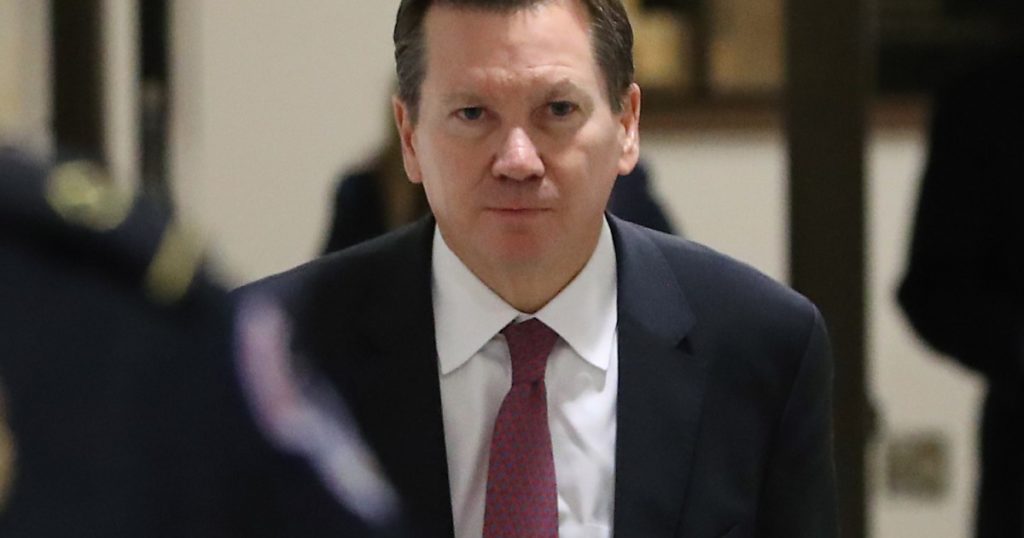 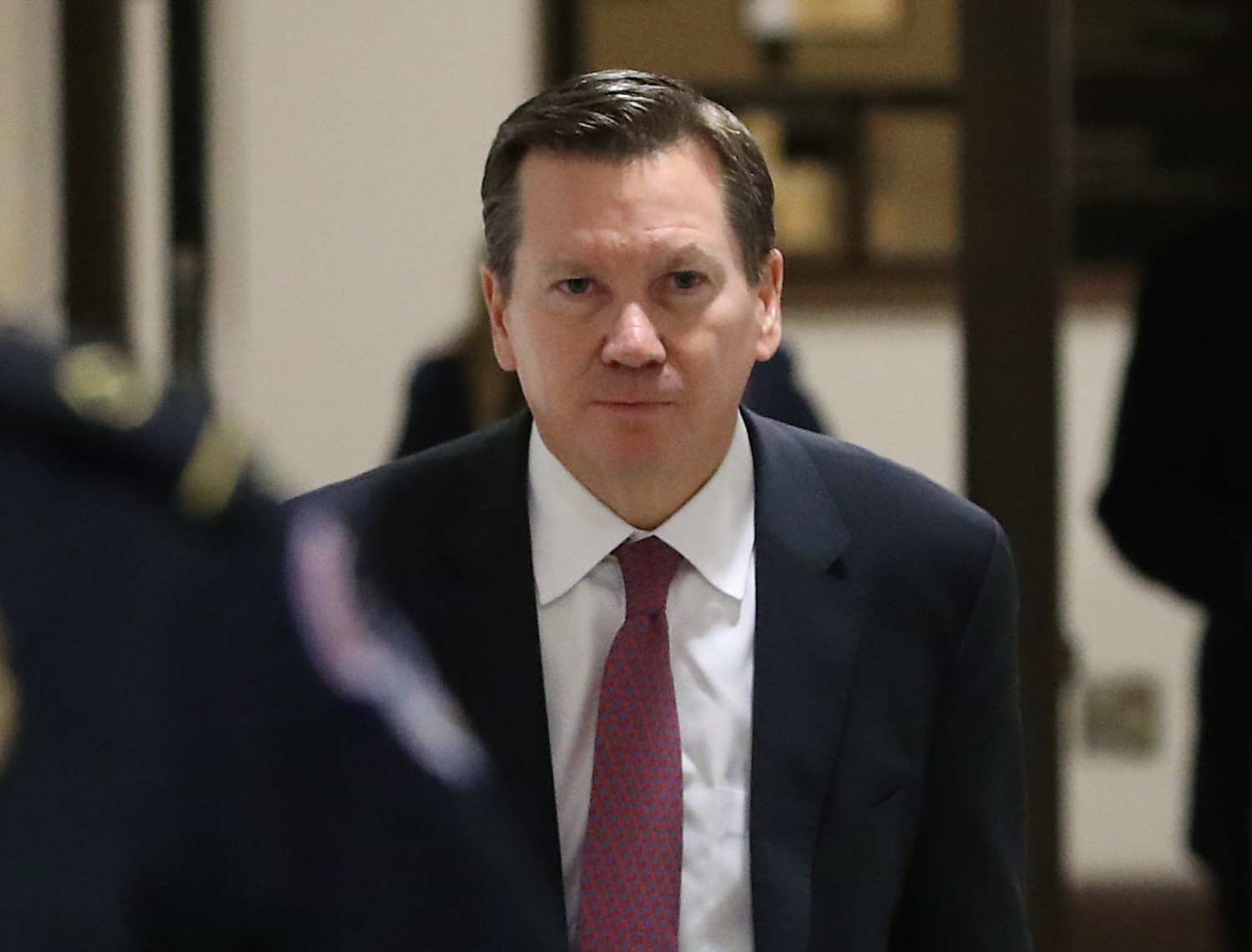 Michael Atkinson says he did what the law required, nothing more.

“I did what I had to do,” he said. “If I had kept quiet, I would have spent the last year, probably the rest of my life, not sure I could live with myself.”

Atkinson can trace his test of conscience to a precise moment: just before noon on Thursday, Aug. 15, 2019, at his L-shaped desk in a nondescript office overlooking a highway in northern Virginia. That’s when he stopped dead at the second paragraph of a whistleblower’s complaint: “The president of the United States is using the power of his office to solicit interference from a foreign country in the 2020 U.S. election.”

If true, Atkinson thought, this is a constitutional forest fire.

What happened next in those pre-coronavirus days seems ancient, if familiar, history, with the complaint sparking a congressional investigation and President Trump’s impeachment, an action Democrats are threatening to duplicate in the wake of pro-Trump extremists storming the U.S. Capitol last week.

But now, speaking for the first time, Atkinson described the behind-the-scenes story of how the complaint became public. At the time, he served as the intelligence community’s internal watchdog and was plunged into a universal crucible of the Trump presidency: being forced to chose between political expediency and duty.

For Atkinson, duty came naturally. Fulfilling it was the challenge.

The son of a salesman and librarian, Atkinson has thick brown hair and playful blue eyes that make him seem younger than his 56 years. He grew up in the small town of Pulaski, N.Y., on the shore of Lake Ontario.

After graduating from Cornell Law School in 1991, he joined a law firm in Washington and rose to partner. The money was great, but the job less than satisfying. He got more joy representing criminal defendants pro bono.

Motivated to serve after the Sept. 11, 2001, terrorist attacks, he followed his heart and joined the Justice Department. In 14 years as a federal prosecutor, Atkinson handled high-profile, high-pressure cases involving politicians, national security matters and big scams. Through it all, he earned a reputation for doggedly pursuing justice.

“There was no one better at methodically building a white-collar case,” said Brian Seeley, a former federal prosecutor who worked closely with Atkinson. “Michael never cut corners, he always kept an open mind.”

The Trump administration in 2017 expressed interest in Atkinson as the next U.S. attorney in Washington — a surprise to the prosecutor, who isn’t even a registered Republican. The job didn’t pan out, but he was asked to become the inspector general of the intelligence community, a position overseeing lawyers and investigators seeking to uncover waste, fraud and abuse in the nation’s 17 intelligence agencies.

Atkinson wasn’t sure. He was concerned the president demanded loyalty and fired those who disagreed with him. Yet, after administration officials repeatedly told him they wanted someone independent in the job, he felt “reassured that I wasn’t expected to be a partisan,” he said. “It didn’t seem that risky if that is what they all wanted.”

At his confirmation hearing in January 2018, Atkinson said protecting whistleblowers who demonstrated “moral courage” in exposing corruption was a key component of the job. “We want to make sure, as part of that program, that they don’t have a fear of reprisal,” he said.

Confirmed in May, Atkinson set about improving morale and pushing for aggressive investigations. His nominal boss at the time, then-Director of National Intelligence Daniel Coats, described him as having “excellent leadership qualities, sound judgment and faithful adherence to his oath of office.”

Coats left his post just as the whistleblower’s complaint reached Atkinson’s desk. While most complaints — the office received more than 600 in fiscal 2019 — were poorly constructed and led nowhere, this one was different. As he examined the seven-page document, Atkinson was impressed by its incisive writing and research. It painted a devastating portrait of Trump and his White House, alleging the president was pushing Ukraine’s leader to investigate former Vice President Joe Biden, who was seeking the Democratic nomination for president.

The complaint focused on a July 25 phone call between Trump and Ukraine’s president, Volodymyr Zelensky. In the call, the whistleblower wrote, Trump pressured Zelensky to investigate Biden and his son Hunter, who had served on the board of a Ukrainian energy company.

If Atkinson found the whistleblower’s allegations credible and of “urgent concern,” he was required by law to send the complaint to Joseph Maguire, the acting director of national intelligence, who then would forward it to Congress.

Atkinson assembled two lawyers and an investigator to inquire. They interviewed those familiar with the Ukraine call and vetted the whistleblower’s background. In a letter to Maguire on Aug. 26, 2019, Atkinson wrote, his office found the complaint to be urgent and credible.

But Maguire, who could not be reached for comment, did not send the complaint to congressional intelligence committees.

The next few weeks were among the toughest of Atkinson’s career. He labored 12- to 15-hour days at the office, unsuccessfully trying to prod Maguire and his team to disclose the complaint to Congress. He felt stressed and isolated. He couldn’t even tell his wife what he was working on.

He was late for his son’s 19th birthday party and AWOL as his wife organized the young man’s departure for college.

“It was frustrating because Michael was hard-pressed to get home before 10 or 11 at night,” said his wife, Kate Atkinson, the managing partner at a major law firm. “And he couldn’t tell us what was up.”

Atkinson was driving his son to college in New York when he got a call from a deputy who told him the White House might allow his investigators to review detailed notes of the call between Trump and Zelensky. He switched to the passenger seat and for 20 minutes discussed the potential offer and its ramifications. The overture made Atkinson nervous.

Surely, he thought, the White House would not provide him with such records if they were incriminating. He wondered if he had been wrong about the complaint. Had he made a massive error?

After dropping his son off, he skipped a vacation with friends and raced back to Washington, where he learned the White House was not going to allow his team to review the notes, after all. The administration was citing an opinion from the Justice Department that Trump was not considered a member of the intelligence committee. Thus, the department argued, the allegations did not meet the legal definition of an “urgent concern,” meaning they did not have to be disclosed to Congress.

“When they adopted the legal argument and dropped the factual argument,” he said, “I knew the whistleblower was probably very accurate.”

But how could he get around the Justice Department? After several weeks of back and forth, Atkinson told Maguire’s lawyers he would notify Congress himself.

They said they wouldn’t try to stop him but forbade him from describing the allegations.

“I think Maguire and others knew it was the right thing to do, but they didn’t want to be the ones to send it to Congress and anger the president,” Atkinson said. “They were relieved I was the one to do it.”

On Sept. 9, Atkinson sent a sparse letter to the intelligence committees saying he had received a complaint he deemed to be a credible and urgent concern but was not being permitted to disclose it. The communication landed like a bomb.

“If he hadn’t written that letter to the committee, we may never have known about the whistleblower complaint,” said Daniel Goldman, the top lawyer on the House intelligence panel. “That was a big step because no one was aware of that ever happening before. We understood it was both serious and urgent. And it triggered a series of steps that quickly led us to understand that the complaint involved the president.”

Democrats demanded answers from Maguire, who pushed back, saying his office had determined the complaint’s claims “did not concern allegations of conduct by a member of the intelligence community or involve an intelligence activity under the DNI’s supervision.”

Atkinson was aghast. “This minimalist narrative struck the wrong chord for me,” he said. “They said it didn’t relate to intelligence activity. There was nothing being said about the president or election interference.”

Atkinson labored over a second letter to the House committee, writing that the whistleblower’s allegations involved one of “the most significant and important duties” of the intelligence community. It was obvious to House lawmakers the culprit was the president, and the allegations involved election meddling.

Within days, news organizations began reporting on the existence of the whistleblower complaint.

On Sept. 25, under growing political pressure, Trump released detailed notes of the July 25 call, which he called “perfect.” The next day, Maguire made the complaint public ahead of his testimony before the House Intelligence Committee.

Atkinson was relieved when he read the notes of the call because they verified the whistleblower’s complaint. His role in the drama was over — House investigators and lawmakers found witnesses with direct knowledge of the president’s scheme.

Like the rest of the country, Atkinson watched the House and Senate proceedings as a spectator. Trump became just the third president in history to be impeached. He was acquitted along party lines in the Senate. Atkinson won’t say how he felt about the verdict.

“It would suggest I had a bias in some way,” he said. “I do have a view but think it’s best not to say.”

Though Atkinson was done with the president, the president and his allies weren’t done with him. Trump on Twitter questioned his integrity and abilities. Rep. Devin Nunes (R-Tulare) called for Atkinson to be criminally investigated for his role in the “fake impeachment hoax.”

Trump fired him on April 3, 2020, and told reporters that he thought the inspector general “did a terrible job. Absolutely terrible.”

Those who know and have worked with Atkinson say he acted with integrity.

“He paid a price for this action, but will for the rest of his life know that he stayed true to his sworn oath of office,” said Coats, the former director of national intelligence.

Looking back, Atkinson shrugs off the attacks by Trump and others. But he remains angry about what happened to the whistleblower. His name was revealed by lawmakers — some of whom had championed protections for government officials who disclose wrongdoing — and spread widely in the conservative media. Death threats rained down on the official. The individual required security.

Atkinson considers the whistleblower to have acted with the “moral courage” he described at his confirmation hearing. All the inspector general did, he said, was fulfill his duty.