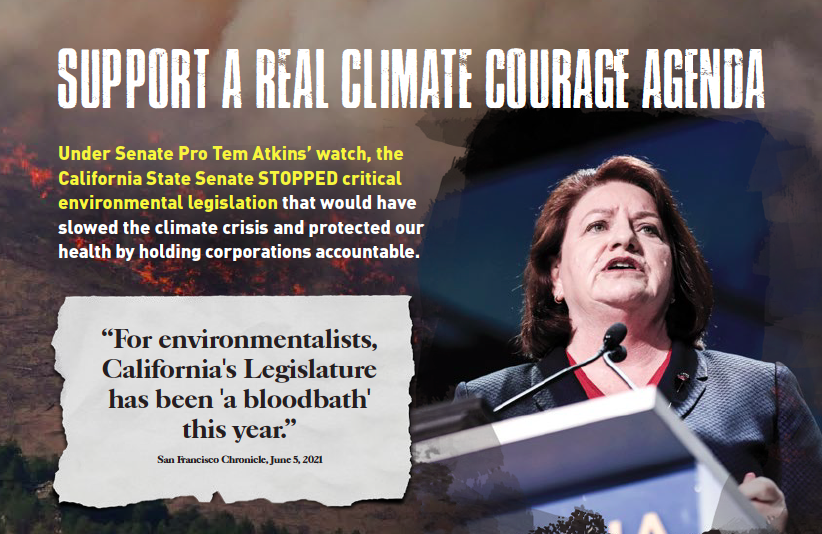 The CLCV is asking people, particularly constituents of the three Senators targeted by the campaign, to call their representatives and urge them to do a better job to create policies to curb climate change.

“In recent years, the Senate has been the place where climate policy has gone to die,” Mary Creasman, CEO of the CLCV, told Streetsblog. “So we have to look at leadership. In their critical leadership roles, [these three Senators] have played a significant role in getting climate bills held and stopping them from moving forward. It is unacceptable.”

These leaders are not only hindering policy solutions, they are not proposing any solutions of their own, perhaps because each of them receives campaign contributions from the oil industry, as detailed in the campaign’s mailers (see accompanying photos).

“Are we in a climate crisis or aren’t we?” asked Creasman. “Do we believe the recent IPCC report that says we are at code red, or don’t we?”

“This is an emergency – not some time in the future, but now. We either have leadership that knows how to act in a crisis, or we don’t.”

California is the only state with an oil extraction industry “that doesn’t have a health setbacks rule,” said Creasman. “How can every other state have a buffer zone, but California can’t even get that done?”

She is referring to S.B. 467 from Senator Scott Wiener, which would have phased out new permits for fracking and restricted oil permits near housing, schools, and similar “sensitive” land uses. The bill was a second attempt to institute buffer zones around oil wells, which in many places – especially in the L.A. basin – are right next to where people live, work, and go to school.

S.B. 467 did not get past its first hearing in the Natural Resources and Water Committee, chaired by Senator John Laird (D-Santa Cruz), when Senators Hertzberg and Hueso abstained from voting on it. Their two nonvotes were enough to stop the bill in its tracks, despite the committee vote being four to three in favor.

“If you’re not going to vote on a bill, it’s the same as voting no,” said Creasman. “You know it’s going to kill it.”

“Senator Hertzberg has been very vocal against health setbacks at oil wells,” said Creasman, “and also against the phasing out of oil and gas” as energy sources. “Senator Hueso has voted against and abstained on bills, and he’s gutted other clean energy bills in his committee,” she said.

“He’s the opposite of an energy committee chair. We need a chair who is laser focused on creating a transition to clean energy and a clean economy.”

For her part, Pro Tem Atkins tends to point to past legislation as proof of her climate credentials, but she’s not doing enough to foster good climate policy now, said Creasman. As leader of the Senate, she has not prioritized climate policy, and under her watch many bills have been killed or delayed.

Climate change, however, won’t slow down to wait for policy to catch up. “We don’t have time to waste,” said Creasman.

The League of Conservation Voter’s Climate Courage campaign includes video ads, mailings to voters in the three Senators’ districts, and billboards drawing attention to their voting records – and the amount of money they have received from the oil and gas industry.

Meanwhile the notion that there isn’t any time to waste arguing over climate policy seems to be shared by some legislators, at least. For example, today’s informational hearing by the Joint Committee on Climate Change hosted some passionate testimony on the need for urgent action, as well as impatience about some of the obfuscation and distraction that dominate policy conversations.

But it also featured testimony from labor representatives and the oil industry lobbyists of the Western States Petroleum Association, who argued that while climate change policy is “important,” jobs and the survival of the oil and gas industry are more so.

Other legislators do not seem to be feeling the heat – and not just Republicans. Plenty of other Democrats in the Senate have taken contributions from the industry, including among them Senators Steven Bradford (D-Los Angeles), Anthony Portantino (D-San Fernando Valley/San Gabriel Valley), Tom Umberg (D-Orange County), Richard Pan (D-Sacramento), Melissa Hurtado (D-Fresno), and Anna Caballero (D-Salinas). Their voting records on climate bills – even on something as simple as S.B. 47, which would increase the amount of money the industry must spend to plug its idle oil wells – show their lack of concern.