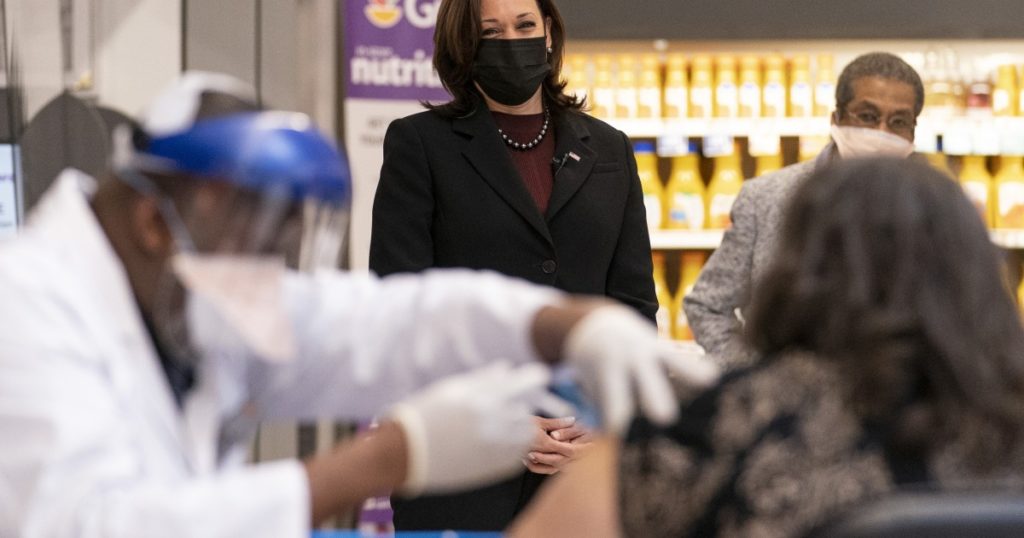 Vice President Kamala Harris stood by the pharmacy counter of a Giant grocery store in a largely Black neighborhood here Thursday, talking an older customer through her booster dose of the COVID-19 vaccine.

“It will feel, when you get the shot, the same way the first one felt,” Harris told her, recounting her own experience. “The next day, I realized I needed to take it a little slow.”

This latest example of Harris’ retail effort to promote the vaccine, as the vice president stood between the frozen pizza bin and bags of quinoa, underscored her central role for the Biden administration in persuading Black Americans to take the shot. With many of them wary based on a history of mistreatment by the medical system, Harris’ participation is seen as crucial, especially as some other high-profile Black influencers, including NBA stars, have declined to take on a public role.

In recent days, she has called local Black radio stations, recorded separate interviews with NBC’s “Today” show and with the Rev. Al Sharpton, and made calls to community leaders, urging people to accept the vaccine as she pitches the administration’s $1.9-trillion pandemic relief plan.

The vaccine supply is growing rapidly, with more than 15 million doses potentially available next week if Johnson & Johnson wins approval of its vaccine, as expected. That means an inoculation campaign that has focused largely on spurring the availability of vaccines will shift toward persuasion, especially in Black and Latino communities hit hardest by the pandemic.

Getting enough people to take the shot when supplies are limited “is the easy part,” said Samir Balile, a pharmacist and clinical program manager for the Giant chain, who spoke at the event with Harris. Customers lined up all day for shots, he said.

But “the next phase,” Balile said, will require pharmacists like him, as well as pastors and other local community leaders, to talk openly and frequently about the vaccine’s safety to convince the skeptics.

In a poll released earlier this month by the Associated Press, 43% of Black respondents said they would probably or definitely reject the vaccine, compared with 32% of white respondents and 35% of Latinos.

It’s not just about persuading people that it’s safe. Many experts who have studied vaccine hesitancy say the administration must work harder to erase logistical hurdles that are more common in minority communities — including lack of access to transportation and the internet. In many places, appointments are arranged online.

“We need to make getting a vaccine really easy,” said Dr. Oni Blackstock, a founder and executive of Health Justice, a health-equity consulting practice in New York. “It has to be really low-threshold if people do have concerns.”

It’s not an easy sell, even with Harris’ profile. She presented a confident case on local radio stations last week, including a Wednesday morning call with KJLH, a Black-oriented radio station in Inglewood owned by Stevie Wonder.

Yet two days later, listener “Nick from Inglewood” called in to the same morning show with a false rumor about the vaccine that he’d heard from a bus driver. Host Dominique DiPrima sought to gently push back.

“We know that there is a history of us being used as guinea pigs, us getting different treatment and access,” DiPrima said in an interview, to explain the widespread suspicions. To try to dispel them, she has featured a parade of Black scientists and doctors on her show.

The Tuskegee study that began in the 1930s, which enrolled Black patients under false pretenses and then allowed them to die of untreated syphilis, is the most prominent example of scientific betrayal. But inequities continue, including studies showing Black patients who report pain receiving less-responsive treatment in emergency rooms than white patients.

DiPrima said callers on her show bring a number of concerns, including distrust of the pharmaceutical and medical establishment or worries the vaccine was developed too quickly, as well as conspiracies they find online.

Harris has tried to tackle distrust of the medical establishment head-on, acknowledging Thursday that some groups “are experiencing vaccine hesitancy for legitimate reasons that are based on historical experience that we should never forget.”

She acts more as a referrer than a closer, directing her audiences to local health department websites and pointing to the role of Dr. Kizzy Corbett, a Black immunologist, in developing the vaccine.

When Harris went to get her initial shot before she and President Biden were sworn in to office, she deliberately chose Washington’s only public hospital in a Black community. She emphasized there that people could get inoculated “right in your community” by “folks you may know.”

Dr. William Strudwick, the hospital’s chief medical officer, said “our vaccination line was ringing off the hook” the day after the televised moment when Harris received her shot. Yet the progress in inoculating even his own largely Black staff has been incremental, going from about 50% acceptance when Harris came in late December, to 60-65% as of this week.

“I think that will progress and improve,” he said, pointing out that initially only 25% to 30% of the hospital’s staff had agreed to be inoculated.

Harris is not the only influencer. The hospital has brought in Doug Williams, who played on the Washington Football Team when it won a Super Bowl, as well as other locally known Black leaders.

The effort has been limited by supply shortages, with about 4,000 shots given out so far to staff and community members. In the early weeks, many of those shots were going to people who came in from more affluent parts of the city. More recently, Strudwick said, the hospital has focused on giving priority to people from the neighborhood it serves.

In a recent study, more than 14,000 Black and Latino Americans watched informational videos about the coronavirus featuring doctors of different races. The study found Black audiences were more receptive to messages featuring people who look like them, echoing the beliefs of many activists.

But Harris is just one voice.

“The use of various voices is important … not only administration officials but people that are on the grassroots level and have influence at the community level,” said Angela Williams, president and chief executive officer of Easterseals. She is part of a group of Black female CEOs addressing healthcare inequities.

Dr. Fatima Cody Stanford, a physician at Massachusetts General Hospital and Harvard Medical School, was a co-author of the study that found Black Americans relate better to Black messengers. She said she believes younger audiences who tend to be skeptical are particularly trusting of familiar faces.

“If you spend all of your day scrolling through Instagram and Twitter,” she said, “you’re not going to the New England Journal” of Medicine for vaccine information.

Harris may be less effective with that demographic group than a musician or athlete.

“Its obviously great to see her promoting the vaccine and getting vaccinated, but I don’t know if that resonates with a lot of people,” said Blackstock, a former assistant commissioner at New York City’s health department, who led the city’s efforts to combat HIV.

She said many of the public health advertising campaigns on the virus are not well targeted to minority communities. She pointed to polling data showing many Black people are in the “wait and see” mode rather than hard no’s on the vaccine.

Early efforts to vaccinate people at large facilities such as Dodger Stadium, with assistance from police and National Guard members, is off-putting to distrustful people, Blackstock said. The administration should spend more money to enlist neighborhood organizations and vaccination sites in places convenient to local communities, and promote more walk-in options, she said.

“People are really getting caught up in this vaccine hesitancy thing,” Blackstock said. “It’s really about institutional trustworthiness.”