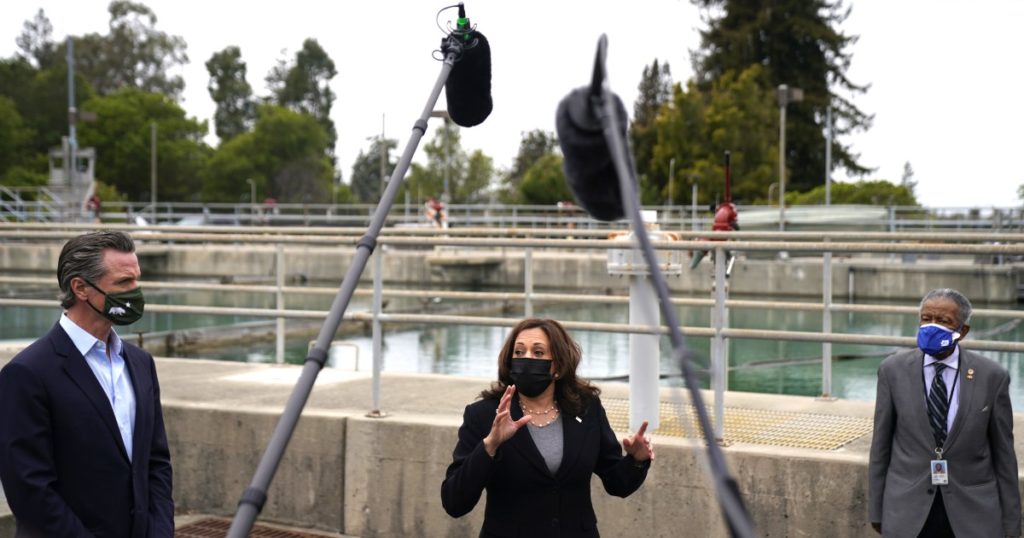 Vice President Kamala Harris on Monday gave a boost to the Biden administration’s $2-trillion infrastructure plan as well as to Gov. Gavin Newsom’s efforts to stave off a recall, joining him in Oakland on her first official visit to California since taking office.

The trip, which included a tour with Newsom of the kind of water-treatment facility that could benefit from the administration plan, coincided with an Easter weekend visit to her home in Brentwood. Harris has been home twice before as vice president, on private visits; in Washington she is in the process of moving into the vice president’s official residence, which has been undergoing renovations, after spending her first months in the government’s Blair House across from the White House.

The tour in Oakland was her first event outside Washington since Biden unveiled the proposed infrastructure plan last week. It includes more than $100 billion for a variety of water projects, including replacing lead pipes as well as improving groundwater storage in the West.

During the tour, Harris said the projects would address “equities and inequities of distribution and access to clean water, especially clean drinking water.” She said the program was intended to help metropolitan areas such as Flint, Mich., which has had a lead crisis in recent years, as well as rural areas including Iowa and the Mississippi Delta, where people have eroding wells and could be eligible for grants under the administration’s plan.

Harris also made sure to praise the beleaguered Newsom, calling him “a champion about what we need to do around our environment.”

The administration’s eight-year spending plan would rely on higher taxes for corporations. It is facing early opposition from Republicans and some business groups, along with a few moderate Democrats who say the higher taxes could hurt economic growth.

Harris also held a session with politicians and small-business people on Monday, and will be overnighting again in Los Angeles. She is scheduled to stop in Chicago on Tuesday, on her way back to Washington, to promote equitable distribution of vaccines.