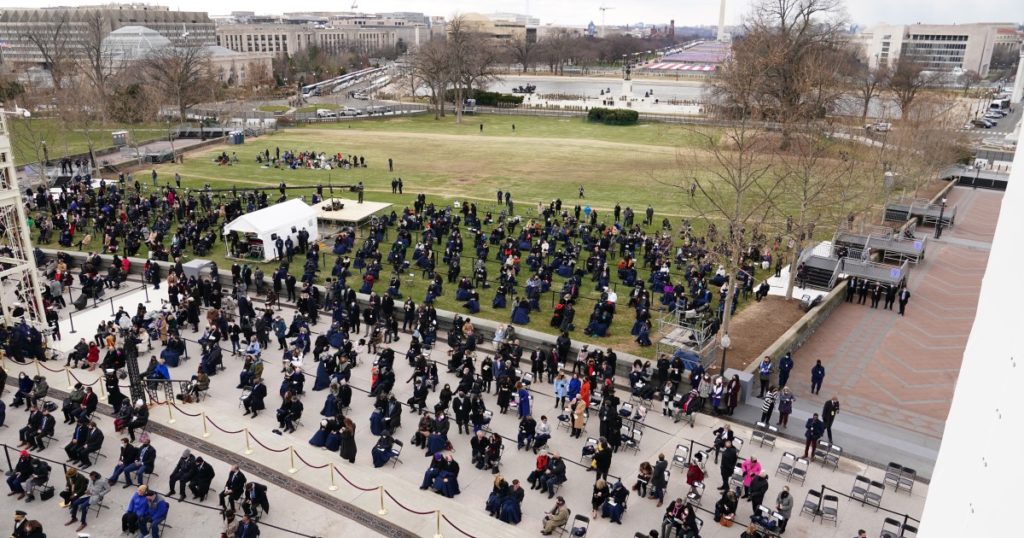 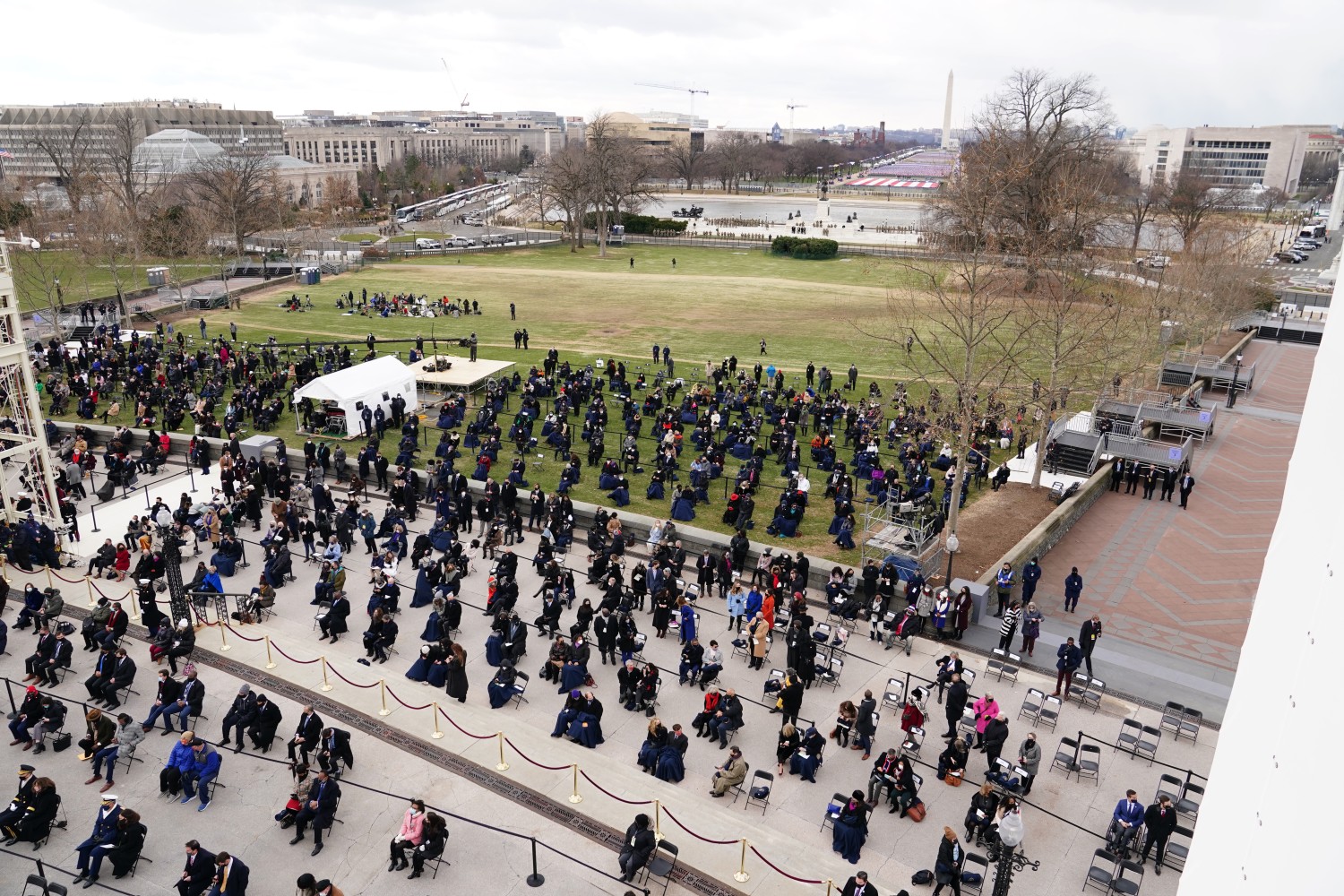 On television, at least at certain moments, it may have looked as it always has — the hand on an old Bible, the Marine Band’s brassy rendition of “Hail to the Chief,” the audience of dignitaries.

But when Joseph R. Biden descended the steps onto the inauguration platform bedecked with red, white and blue bunting, he passed through a brass door with a large crack in its glass panel, lingering evidence of the deadly siege of the U.S. Capitol building two weeks earlier.

Across Washington on Wednesday, there were reminders that America’s transfer of power, this time, had not been peaceful. As much as Biden’s inauguration, and his address calling for unity at a fraught moment of crisis and division, marked a return to a more traditional brand of politics, the day’s pageantry and rhetorical optimism played out against a grim, unavoidable reality — a raging pandemic, economic instability and an increasingly sectarian and dangerous brand of politics.

The surreal moment was not lost on those attending the ceremony or walking the streets of the heavily militarized city, eerily empty and quiet on a day that has historically drawn hundreds of thousands of Americans to the capital.

Near Union Station barbed wire was coiled along the top of black security fencing. A line of National Guard troops with rifles stood inside the perimeter. Biden had hoped to disembark there after taking an Amtrak train into Washington on inauguration morning, repeating his commute from Delaware during his decades in the Senate, but those plans were scotched after the violence 14 days ago forced heightened precautions.

Shops and restaurants nearby were boarded up. Vendors hoping to sell commemorative items weren’t having much luck, their carts of plastic-wrapped inauguration booklets — Joe Biden’s face on one side, Kamala Harris on the other — still full.

With few customers, a hot dog vendor who’s worked the National Mall on every Inauguration Day since President Carter’s in 1977, handed her foil-wrapped snacks through the metal fence to National Guard troops on patrol near the Smithsonian. “Very slow,” said the vendor, who came to the U.S. from Vietnam 46 years ago and gave her name as Hung.

“It’s on one hand heartbreaking and on the other a very poignant reminder of the fragility of democracy,” said Rep. Dean Phillips (D-Minnesota) as he waited for the ceremony to begin in the chilly morning shadows of the Capitol’s west front.

Many of the features of inaugurations past didn’t take place at all. Typically, the new president attends a ceremonial luncheon with lawmakers beneath the Capitol dome and is served on a historic set of China that’s been used by every newly inaugurated president dating back to Thomas Jefferson. But this year, there was no such meal, no lines of onlookers along Pennsylvania Avenue as Biden’s motorcade headed to the White House, no parade featuring marching bands and performers from every state.

Vice President Mike Pence’s presence on the platform was a reminder of President Trump’s refusal to attend the swearing-in. Many Republicans in Congress attended, including some of those who had propagated Trump’s lies about the election outcome and voted against certifying the electoral college count on Jan. 6, even after the mob attacked the Capitol.

One of them, Rep. Lee Zeldin, (R-N.Y.), said the day marked an important pausing of the bitter partisanship but made it clear the respite would be short-lived.

“I’m not going to make believe that our country is imminently on the verge of this, this perfect healing and unity that is going to start, you know, miraculously two hours from now,” Zeldin said.

Like everyone who attended the ceremony, Rep. Marcia Fudge, (D-Ohio), endured enhanced security measures upon entering the Capitol. As she headed to the Capitol, her phone was buzzing with text messages from friends urging her to be safe.

“It is a sad day for this country that we have to do this,” Fudge said of the security precautions. “But what an exciting day as well. It is redemption.”

The masks worn by Biden, three former presidents and other dignitaries on the platform, however familiar, were but one reminder of the seriousness of the pandemic. Lawmakers, most of whom opted against bringing their spouses with them to the inauguration, sat several feet apart. Some wore body armor beneath their clothes. When Vice President Kamala Harris took the oath of office shortly before noon, becoming the first woman to hold the office, she and Biden bumped elbows but did not hug.

Four years after Trump began his term by complaining that the aerial images of his inauguration ceremony didn’t properly convey the enormity of the crowd on the Mall, hardly anyone watched from that familiar greenway between the Capitol and the Lincoln Memorial.

In place of people, there were rows of small flags representing all 50 states and the thousands of Americans told, for the first time in the country’s history, to avoid visiting Washington. On Tuesday evening, Biden and Harris held a somber ceremony at the Lincoln Memorial to mark the more than 400,000 Americans who have died from the coronavirus with a display of lights lining the Reflecting Pool, the first major moment of national mourning since the crisis began.

“It’s grim and beautiful at the same time,” said Rep. Jared Huffman, (D-San Rafael). “I’m glad that we are finally paying our respects to 400,000 fellow Americans we lost in a sincere and meaningful way that’s long overdue. But everything about this is totally unlike any precedent that we have.”

Unable to gather on the Mall or inside restaurants and bars, people gathered on cafe patios and sidewalks wherever a television was set up. Hundreds gathered against the metal fencing that encircled the Mall itself, getting as close as they could to the action, glued to competing feeds of the president’s speech playing at maximum volume on dozens of phones.

COVID-19 and the threat of violence did not keep some from attending the swearing-in ceremony of President Joe Biden and Vice President Kamala Harris.

Downtown, the streets were empty and military checkpoints had turned the road into a playground for at least one boy who rode circles on his blue bike with training wheels.

The boy’s father, Rob Brunton, 48, said he wasn’t sure how he would explain everything about the day when his son is older.

“You almost want to forget about why this all happened,” he said.

In a strange way though, the mix of patriotic spectacle and concessions to the realities of the moment offered a distinctly American Inauguration Day, featuring in equal measure the nation’s highest aspirations and the recognition, comparatively novel but now unavoidable, of its ongoing struggles to fulfill them.

However impossible it was to overlook the aspects of the usual ceremony that were missing or altered by circumstances, optimism — and a new sort of clarity — carried the day, perhaps most eloquently so in the voice of a 22-year-old poet whose closing verses from the inauguration platform echoed across the land.

“The new dawn blooms as we free it,” said Amanda Gorman, a Los Angeles native.

“For there is always light if only we’re brave enough to see it,

“If only we’re brave enough to be it.”