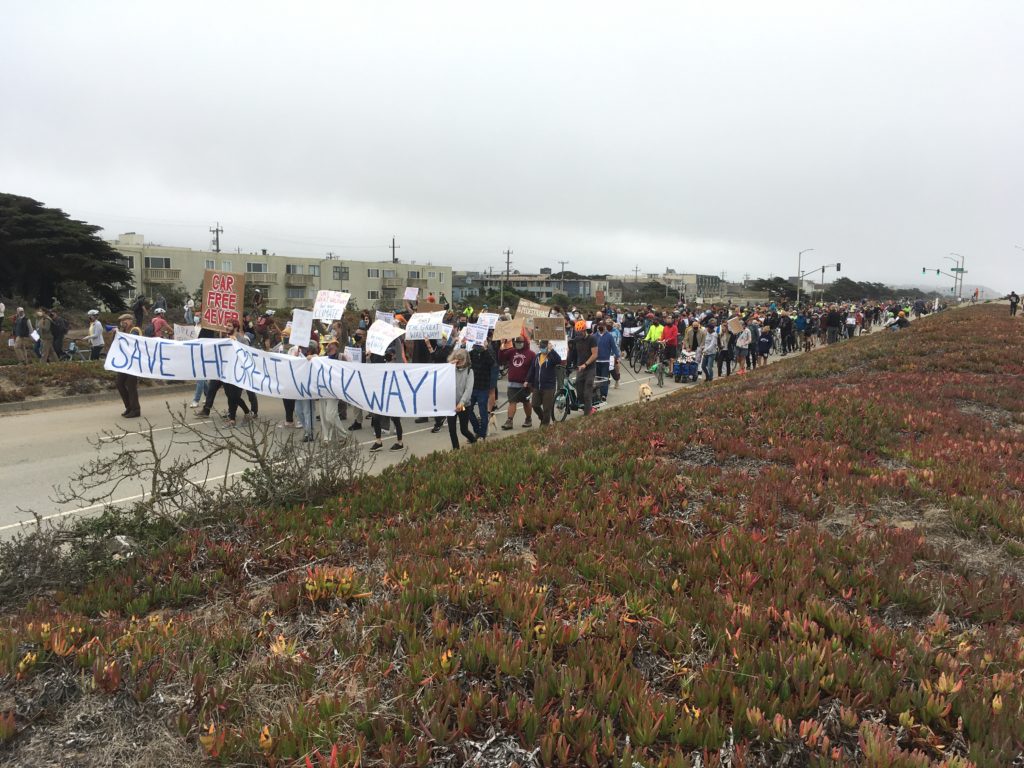 Cars once again now dominate all of San Francisco’s north-south arteries, with the closing of the Great Walkway Monday morning. “There is no excuse for this,” wrote advocate Matt Brezina on social media, blaming “…a lack of courage or vision from our weak electeds.”

As previously reported, a backroom deal between Mayor London Breed and Supervisor Gordon Mar resulted in the announcement of the Great Walkway closure on weekdays, to correspond with the start of the school year. Their fear, ostensibly, was that parents would be unable to drive their children to school. However, it’s clear this concern, like so many rationales for auto-dominance throughout the city, was overblown, as the tweet and pictures below demonstrate:

Tried to ride the bike lanes to remember how terrible they are. They don’t exist anymore. This is @LondonBreed‘s “utopia”. pic.twitter.com/oYk5Z0Bt9J

What was clear, however, is what was lost, as seen in this tweet and video from activist Stephen Braitsch, of the past year and a half of people enjoying the Great Walkway:

I’m sad to miss the rally this morning to save the #greatwalkway so I made a video of some of my favorite moments on it this summer. Enjoy! ♥️🚶🏽‍♂️🚴‍♀️🛴🛹🤙@KidSafeSF @sfbike @walksf @D4GordonMar @LondonBreed @GreatWalkway pic.twitter.com/6GsLxdNw4Q

Meanwhile, as seen in the lead image, some 600 people demonstrated Sunday morning on the last day of the Great Walkway, making it clear that the fight is not over. Participants included advocates and lawmakers, who have dedicated themselves to restoring the Great Walkway, seven days a week, as soon as possible.

Walk San Francisco put this statement out about it:

Large numbers of neighbors who use the Great Walkway, Sunset residents, climate leaders, parents, children, dog walkers, seniors and other community groups gathered on the Walkway.

With a massive “Save the Great Walkway” banner, protesters demanded that Mayor Breed and Supervisor Gordon Mar halt plans to bring vehicle traffic back on the morning of Monday, August 16.

“The Great Walkway in SF is a 17-acre community gem providing safe access to recreation,” said Megan Nguyen, an organizer with Sunrise Movement Bay Area, a youth climate change movement. “To combat the climate crisis, we should be prioritizing access to green spaces versus commuting cars that pollute our air through emissions,” continued Nguyen. “We’re in a climate crisis. But there’s still hope if we take action now. Let’s show what happens when we choose communities over cars.

“The Great Walkway is a visionary public space that allows us to imagine a healthy, sustainable future for our community.” said State Senator Scott Wiener at the rally. “We need it to stay and need to commit to making it a permanent reality. This is a battle for our health and our climate, and people see that.”

“The city figured out a better use that benefits everyone, not just those in cars,” said Maia Piccagli, co-founder of Mothers Out Front San Francisco. “The pandemic is not over. Kids remain unvaccinated. We need this space now and into the future.”

“The answer is clear: keep the Great Walkway,” said Plyfaa Suwanamalik-Murphy, a Sunset resident and District 4 representative to the SF Youth Commission. “It’s become a hallmark of San Francisco. It’s a place of solace.”

“This is not complicated. Look what we have out here,” said District 6 Supervisor Matt Haney. “Don’t mess with it. This is for all of us.”

Read an extensive fact sheet about the Great Walkway here.

Since April 2020, the car-free Great Highway has attracted thousands of daily visitors of all ages and abilities to this new 17-acre park and promenade on the waterfront. Besides creating an incredible space for walking, running, dog-walking, biking, scooting, and skating, the so-called ‘Great Walkway’ has hosted protests, art installations, concerts, and community gatherings. Since closing to cars and opening to other uses, the Great Walkway has become one of the city’s most visited recreational spaces, second only to Golden Gate Park.

The San Francisco community, sunset neighbors, under the leadership of SFCTA, SFMTA and Rec Park departments, have been engaging in a community process to determine the future of the park.

However, on Thursday August 5th, the Mayor, Supervisor Gordon Mar and Supervisor Connie Chan abruptly announced that the city would reopen the Great Highway to vehicle traffic from Mondays through Fridays starting the morning of August 16.

According to SFCTA data, from October 2020 to March 2021, the Upper Great Highway had on average 3,200 weekday bicycle and pedestrian users and 5,200 weekend day users. This is about 26,400 weekly visitors. By comparison, the Golden Gate Promenade (the pathway next to the water at Crissy Field) saw about 2,000 people on weekdays and 3,750 on weekends in September 2020, averaging about 17,500 weekly visitors.

Many were shocked by the Mayor’s sudden decision, especially when a public process and additional data collection and analysis were already in motion. As part of the SFCTA’s District 4 Mobility Study, five road configurations were presented for the future of the Great Highway. The San Francisco Municipal Transportation Agency (SFMTA) and San Francisco Recreation and Park Department (SF Rec and Park) were tasked with bringing to the SFMTA and SF Rec and Park joint commission a 2-year pilot project plan in the fall and additional public outreach efforts were planned.