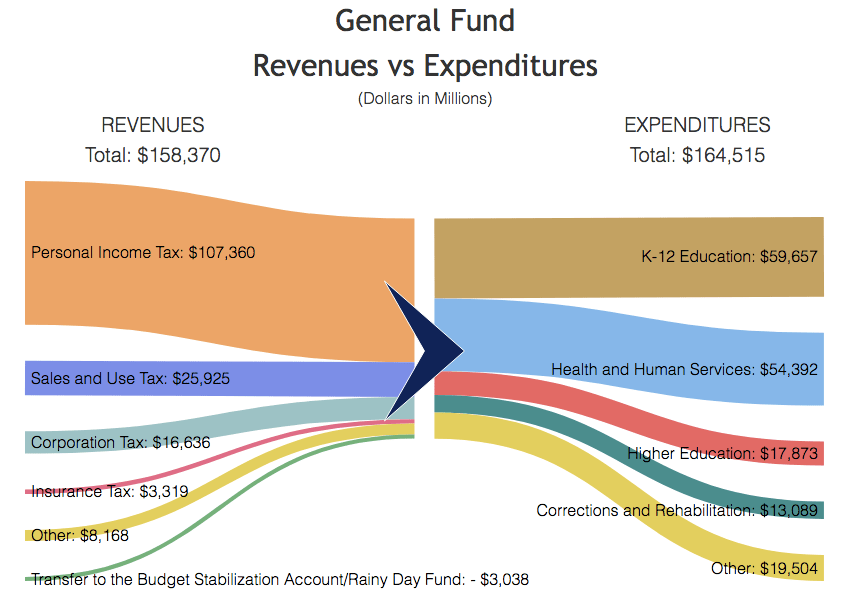 The proposed budget is the start of a six-month conversation with the California legislature, which opens its 2021 session today. Newsom will release a revision in May which will take into account any adjustments to state revenue or any changes he wants to make. The two legislative houses will weigh in, and could propose their own budgets, before an agreement must be reached, and a budget signed by the Governor, on June 30.

Newsom’s budget includes a call for “immediate action” by the legislature for $5 billion in emergency pandemic relief, before the final budget in June. Among those actions are a one-time payment of $600 for Californians with low incomes, an extension of the state’s eviction moratorium, planning out how to reopen schools, and loans and tax credits to help small businesses and nonprofit cultural institutions disproportionately impacted by the pandemic.

This year’s budget process is notable not just for the record amount of proposed spending, but also for the pressing issues it addresses that were not part of any previous year’s negotiations — including COVID and the shifting educational landscape. Naturally these are both major parts of the governor’s proposed budget.

The higher-than-expected revenues from the taxes on the wealthy, whose financial situation improved while regular people lost jobs and income, means the state has more to play with. But, as pointed out by the California Budget and Policy Center:

The proposed budget notably fails to recognize that the state’s unexpectedly strong fiscal health results from dramatic and widening economic inequality, where the wealthiest individuals and corporations are thriving while Californians with low and middle incomes, and particularly Black and brown Californians and other people of color, are struggling more than ever to make ends meet.

California’s substantial, but concentrated, wealth means that our state can afford to make the investments needed for a more equitable recovery. State policymakers have an opportunity to put a budget plan in place that, with additional revenue, invests in the immediate and future health and economic security of all Californians, makes the state’s tax system more equitable, and in so doing, positions our state to more quickly and equitably emerge from the recession and pandemic.

The Budget and Policy Center provides a detailed look at the governor’s proposal here.

The budget proposal takes note of the intensification of income inequality, and makes some stabs at addressing it. For example, it proposes money for infill housing, infrastructure, and tax credits to support development of low-income housing, and for purchasing more hotels to use as supportive housing for homeless people.

Newsom’s budget also includes $1.5 billion for climate change, focused mainly on achieving California’s zero-emission vehicle goals by electrifying the vehicle fleet and accelerating the pace of building related infrastructure. It would beef up the Clean Cars for All program, which provides incentives for low-income people to replace fossil fuel vehicles with electric ones, including heavy-duty vehicles like trucks, buses, and off-road equipment.

The Coalition for Clean Air applauded the Governor for “putting his money where his mouth is and recognizing the value of making smart investments in [a] clean transportation transition. And the Governor is rightfully prioritizing clean mobility and clean air for the Californians most vulnerable to pollution, poverty and pandemic.”

California’s vehicles are responsible for the vast majority of our air pollution and are our largest source of greenhouse gas emissions. Both the Los Angeles metropolitan area and the San Joaquin Valley continue to regularly face choking levels of smog and soot, and failure to meet healthy air standards could mean a loss of federal transportation funds. The state is not on track to meet our 2030 standard for reducing climate-changing pollution, largely because transportation emissions have stayed stubbornly high. And our low-income communities of color are suffering the greatest burdens of air and climate pollution. With our lungs under assault from the coronavirus respiratory infection, we – now, more than ever — need to protect Californians from lung-searing emissions.

Kathryn Phillips of the Sierra Club writes that “this is a good start to the months-long budget debate.”

At Friday’s announcement, Governor Newsom also touted a $300 million one-time fund for “toxic site cleanup and investigations of high-priority contaminated properties in impacted communities across the state, which will be prioritized based on public health risk criteria.”

This would include $47.9 million just for the clean up of the abandoned Exide facility, which left residents of Vernon and nearby cities to deal with the health impacts of its toxic practices. “But it’s not just Exide,” said the Governor, emphasizing that investigations of similar sites is necessary. “How many other Exides are out there?” he asked.

Some groups, like The Greenlining Institute, applauded parts of the proposals while pointing out that some of the programs it supports – such as the Community Air Monitoring programs required by A.B. 617 – need improvements.

As noted, Friday’s announcement is the beginning of a process, and there will be many discussions about whether Newsom’s proposals are the best way to spend the state’s revenue.