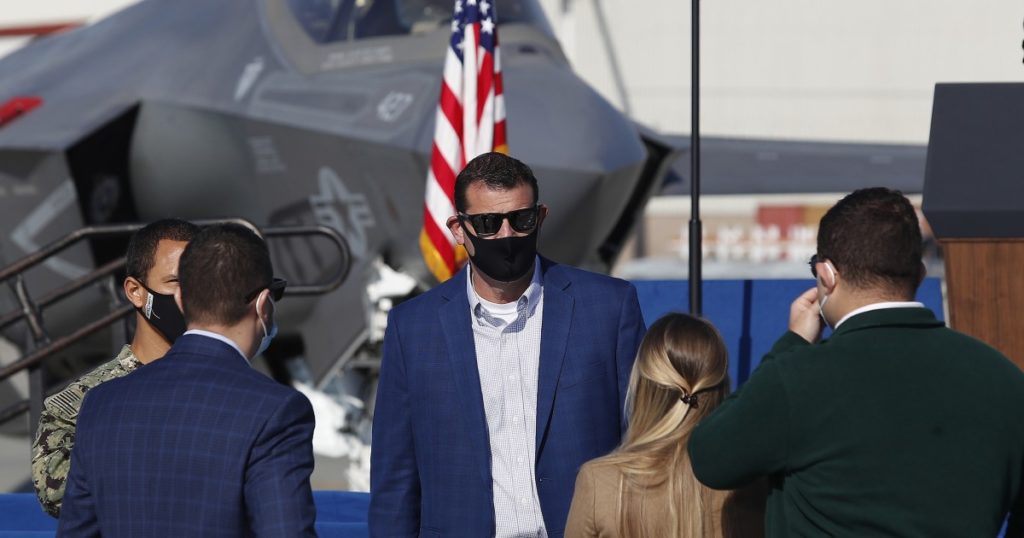 Nearly a month after objecting to electoral votes cast for President Biden, Rep. Mike Garcia wanted to clear the air.

In a lengthy Jan. 30 op-ed in a local newspaper, the Santa Clarita Republican and former Navy fighter jet pilot denounced the blowback on social media that branded him “a seditionist, a traitor, or even worse.”

Roughly 150 miles to the north, Rep. David Valadao also had some explaining to do after voting to impeach President Trump for his part in inciting the deadly riot at the U.S. Capitol. He, like Garcia, was disparaged by some constituents as a traitor.

Two votes in Congress in successive weeks — one to certify Biden’s election and another to impeach the president — snared the two California Republicans into the pitched battle over the future of their party: whether the GOP will demand allegiance to Trump or break from his influence.

On one side sits Garcia and the majority of House Republicans, who on Jan. 6 aligned with Trump in rejecting the will of the voters in multiple states. On the other is Valadao, nine other GOP representatives and a handful of GOP senators who consider Trump’s conduct leading up to the Capitol riot to be an impeachable offense.

The intraparty feud has played out messily across the country. Rep. Liz Cheney (R-Wy.), who voted for impeachment, fended off a challenge to her leadership post mounted by Trump loyalists in Congress. Rep. Adam Kinzinger (R-Ill.), another impeachment supporter, launched a campaign to lead his party away from Trump, while GOP House leader Kevin McCarthy of Bakersfield blamed Trump for the Jan. 6 insurrection but then backpedaled and pledged cooperation with the former president for the 2022 election.

The GOP divide in California has largely stayed out of the national spotlight but is no less consequential. Valadao and Garcia won in their Democratic-tilting districts by the barest of margins — 1,522 and 333 votes, respectively — leaving little room for error for reelection in 2022.

Two years can be a lifetime in politics, and with congressional district lines being redrawn this year, there’s more uncertainty than usual. But at the moment, both members find themselves playing defense: Garcia primarily from Democrats eager to win back his seat; Valadao from his own party’s right flank.

“In the temperament of this world right now, with social media and everyone having an opinion, you can’t do anything right,” said Doug Verboon, a Kings County supervisor and supporter of Valadao. “It’s just a shame that it’s come down to this.”

Valadao experienced the Jan. 6 insurrection at the Capitol as most of America did — glued to the television screen. Stuck at home in Hanford after testing positive for the coronavirus, Valadao flipped between channels trying to make sense of Trump supporters ransacking Congress in an answer to the president’s false call to “stop the steal.”

“I don’t think there’s a word to describe how horrific that day was,” Valadao said.

The more he learned of the events, the more he became certain that Trump was “a driving force” in inciting the riot. One week later, he voted in favor of impeachment.

On paper, the move made political sense. Democrats hold a 16-point registration advantage in this rural district in the southern San Joaquin Valley. Valadao had defied political gravity in the past by being moderate on immigration — crucial for local farm labor in this largely Latino region — and focusing on water policy. The formula was not fail-safe. After winning three terms, he was ousted in 2018, as Democrats tied him to Trump, before reclaiming the seat last November.

Valadao said he kept strategic calculations out of his decision on impeachment, mainly because there was little upside either way.

“Either I make the majority of my district mad or I make my base mad. … No matter which one I picked, politically it was going to be challenging for me,” he said.

Some longtime supporters, such as Stuart Woolf, who runs a family-owned farming and food processing company, have been effusive in standing by the congressman.

“Honestly, I thought it was one of his proudest moments,” Woolf said. The onetime Republican, who recently left the party, was chagrined to get emails almost immediately after the vote accusing Valadao of turning his back on constituents.

Fred Vanderhoof, chairman of the Fresno County Republican Party, said he liked Valadao and his work for the district. But he saw the repudiation of Trump as unforgivable, given the grass-roots enthusiasm the former president had inspired. Vanderhoof fears the volunteers who were energized last year by Trump to campaign for Valadao will now stay home.

“The leadership of the Republican Party would make a major mistake if they would dissociate themselves from President Trump,” Vanderhoof said. He said it’d be appropriate for the California Republican Party to censure or condemn the congressman.

There is already one Republican lining up to challenge Valadao next year: former Fresno City Councilman Chris Mathys, who cited the impeachment vote as his motivation.

“As far as I’m concerned, when you vote to remove the president of your own party, it is a treasonous action,” Mathys said.

Valadao will get help to fend off any challenge from the right. Support will probably come from the Congressional Leadership Fund, an outside group aligned with McCarthy. The newly founded Republican Accountability Project, which aims to spend $50 million defending pro-impeachment Republicans and challenging Trump loyalists, also plans to come to his aid.

“He demonstrated with that vote his commitment to the Constitution, his commitment to democracy, and so we will fight tooth and nail to help him hang on,” said political strategist Sarah Longwell, who is leading the campaign.

Valadao has two Democratic rivals: TJ Cox, who won the seat in 2018, and Nicole Parra, a former assemblywoman. Drew Godinich, spokesman for the Democratic Congressional Campaign Committee, noted that Valadao “endorsed and campaigned with Donald Trump,” signaling that the party will continue to link the congressman with the man he voted to impeach. The DCCC rolled out a television and digital ad Monday in English and Spanish tying Valadao to lightning-rod GOP Rep. Marjorie Taylor Greene of Georgia, who has espoused violent conspiracy theories. Valadao, like Garcia and most Republicans, voted against stripping Greene of her congressional committee posts.

If Valadao makes it to a head-to-head matchup against a Democrat, it might be enough to bring disapproving Republicans back in the fold.

“If the election were today, Mr. Valadao would be moving back to Hanford, because the Republicans would not be there to support him,” said Diane Pearce, president of the Fresno County and City Republican Women Federated. But, she predicted, if the GOP needed Valadao in order to win back the House, “you could see people’s feelings shift quickly.”

Garcia voted with most of his House GOP colleagues to challenge the election, but he is an outlier of a different sort: Though most Republicans who objected Jan. 6 come from staunchly red districts, Garcia’s seat is highly competitive.

A onetime conservative stronghold, the district — which includes the Antelope Valley and parts of eastern Ventura County — has grown more liberal as young families moved in from elsewhere in L.A. County. Democrats briefly captured the seat in 2018 but lost it when Rep. Katie Hill resigned.

Garcia declined requests for an interview or to answer written questions from The Times. But in the op-ed in the Santa Clarita Valley Signal, he explained his actions in terms tailored for his purple district. He insisted he wanted an open debate about election integrity, not to overturn the election. (If the objection had been successful, it would have blocked the votes legitimately cast in Arizona and Pennsylvania.)

He said he opposed Trump’s impeachment because of its hastiness, but the op-ed did not address the charge that Trump incited violence. And Garcia emphasized all the ways he has broken with the GOP, such as supporting the renaming of military bases that honor Confederate soldiers.

The wordy explanation underscored why some California Republicans were puzzled that Garcia objected in the first place, given that his district sided with Biden by 10 points.

Until now, Garcia has not been hampered by his alliance with the Trump wing of the party. Republicans sided with him, instead of with former GOP Rep. Steve Knight, in a special election primary last year, in part because Knight had angered the base by criticizing Trump. Garcia won the special election handily, before eking out a much narrower win for a full term in November.

Knight lamented that political discourse, especially online, is being taken up by the “‘hundred percenters’ — you’re either 100% with President Trump, or you’re not.”

Contemplating the bind facing Republicans in Congress, Knight declared, “I’m sad that I’m not there, and I’m happy I’m not there.”

Frank Visco, a former California GOP chairman who lives in the district, predicted that Garcia’s military background and work on constituent services will matter more to voters than Trump’s continued influence in the party.

“He’s not going to fade away tomorrow,” Visco said of Trump. “But will he have the same impact as 2016? In my opinion, the answer is low degree of impact.”

While the former president’s influence may wane out of the White House and off Twitter, Garcia’s association with Trump will be central to his reelection if Democrats have their way. The DCCC has so far targeted Garcia in two ads, accusing him of siding with Trump and adherents of the baseless QAnon conspiracy that heralded Trump as battling a pedophilic cabal of Democrats and celebrities.

“Mike Garcia has continued to embrace Donald Trump after he incited the QAnon mob at the Capitol that left five dead, including a police officer,” Godinich said. “Mike Garcia shares responsibility and will be held responsible.”

Garcia’s vote also catapulted him to “the top of the list” in Longwell’s campaign to target Republicans who objected to the vote certification. And left-leaning activists launched an online petition calling on Garcia to resign.

In the immediate aftermath of the failed objection to the electoral college certification, Garcia faced backlash online from die-hard Trump supporters who were disappointed that he eventually acknowledged Biden’s win. Some accused him of giving up too easily.

“He’s walking a very difficult line. But in general, I feel he is a man of honor and conscience,” said Trish Lester, communications director for Santa Clarita Republican Women Federated. “If I were walking in his boots, I don’t know I would do anything differently.”