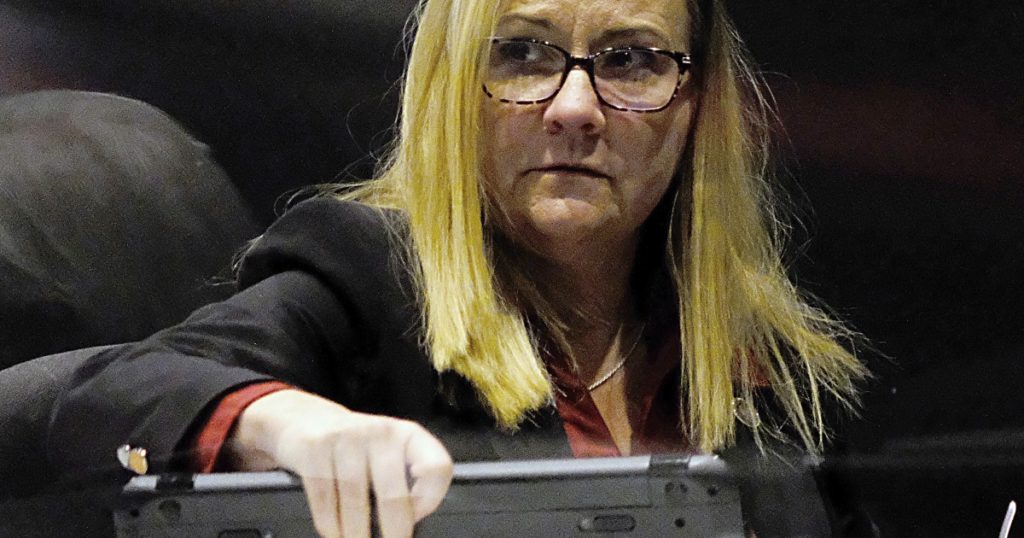 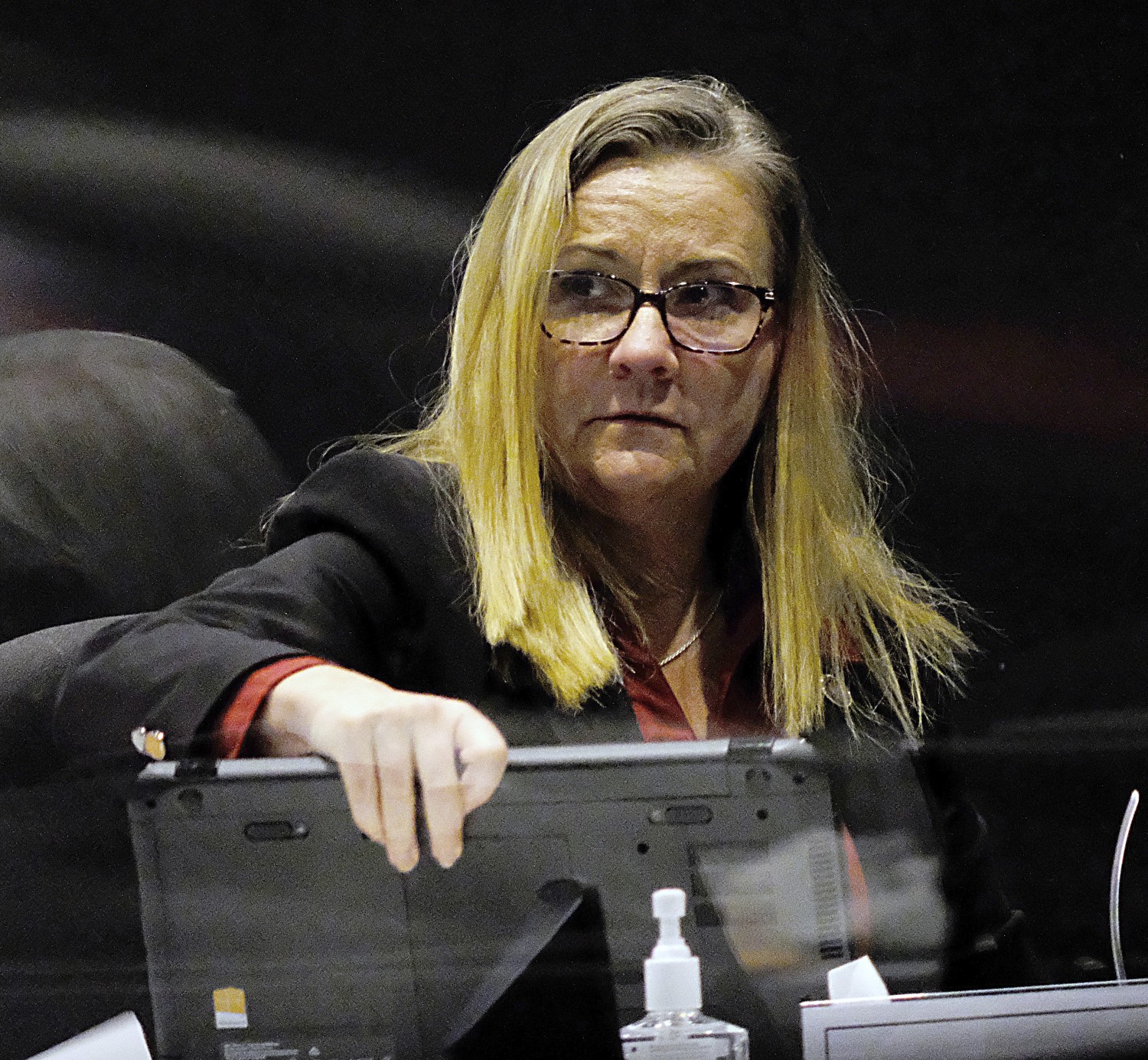 Amanda Chase likes to be known as “Trump in heels.” She spoke at the pro-Trump rally in Washington before the crowd turned into a violent mob at the Capitol. For her social media posts calling the insurrectionists “patriots” and making other false claims, she has been blocked on Facebook, stripped of her committee assignment in Virginia’s state Senate and threatened with censure.

She’s also a prominent Republican candidate for Virginia governor this year, and the GOP establishment in the Democratic-leaning state is worried. Chase personifies a political risk that looms for the entire GOP in the post-Trump era: If the party’s voters continue to be in thrall to the former president, they may nominate candidates too Trumpy to win in swing states.

The Republican Party in Virginia, one of just two states that elect a new governor in 2021, for months has been bitterly split over whether to choose its nominee by a convention or a primary. The convoluted procedural debate had a clear political subtext: Which method would best help or hurt Chase?

Anti-Chase Republicans — even some who are former President Trump’s allies — worry that her nomination would sink the party’s chances, including for down-ballot candidates, this year and into the future.

“There is no way that Amanda Chase is going to be the governor of Virginia,” John Fredericks, a conservative radio host, said on a recent show. “She has zero chance of winning.”

The scramble among Virginia Republicans is an early window into the emerging divisions within the Republican Party: Although Trump has left the White House, Trumpism remains at the center of the political scene.

Many GOP officials in Washington have been trying to distance themselves from Trump in the wake of the Jan. 6 Capitol rampage that left five dead. But he remains a dominant figure among Republican voters, candidates and officials beyond the Beltway.

Clashes between Trump loyalists and those who want the party to move past him will be a focal point in the ex-president’s upcoming Senate impeachment trial and in Republican fights for Senate seats up for grabs in next year’s midterm races. Incumbent Republican Sens. Rob Portman, Patrick J. Toomey and Richard M. Burr — in the swing states of Ohio, Pennsylvania and North Carolina, respectively — have announced their retirements, setting up intraparty free-for-alls.

In making his surprise announcement this week, Portman underscored the challenges that pragmatic Republicans like him face in the current polarized political climate. “This is a tough time to be in public service,” he said.

Ohio is especially ripe for a divisive Republican primary. It is home to both hard-right Trump loyalists like Rep. Jim Jordan and more centrist Republicans like former Gov. John Kasich and his successor, Gov. Mike DeWine. Trump has called for a Republican to challenge DeWine’s bid for renomination next year, because the governor refused to support his effort to overturn his election loss.

In Arizona, divisions erupted when the state GOP leadership voted Saturday to censure prominent Republicans deemed insufficiently loyal to Trump — including Gov. Doug Ducey, who took fire for certifying Biden’s victory in the state, and Cindy McCain, the widow of Sen. John McCain, who endorsed Biden.

Though Arizona Republicans suffered big losses in 2020 — Biden’s victory was the first for a Democratic presidential nominee since 1996 — the party reelected Kelli Ward, a Trump loyalist, as party chair after Trump endorsed her in a recorded message.

“They think if they remove Donald Trump, they stop the momentum of 74 million Americans who voted for Donald Trump. But we are not going to give up the battlefield,” Rep. Andy Biggs, another pro-Trump Republican, said at the state convention. “We are going to keep pushing.”

Ward’s victory was a reminder of Trump’s ongoing clout within the party. All but 11 Republican state chairs have been replaced since Trump was elected in 2016. The Republican National Committee remains dominated by his loyalists, and is headed by his handpicked chair — Ronna McDaniel — who was reelected to a second term this month without opposition.

Before he left office — and lost his much-feared Twitter account — Trump was encouraging primaries against Republicans perceived as disloyal, including Gov. Brian Kemp of Georgia, another governor who refused the former president’s demands that he invalidate Biden’s victory in the state.

At the top of Trump’s political hit list now are those who voted for his impeachment, including Rep. Liz Cheney of Wyoming, the No. 3 House Republican leader, who issued a stinging rebuke of him before casting her vote this month. Trump acolyte Rep. Matt Gaetz of Florida is traveling to Wyoming on Thursday to lead a protest against Cheney.

Establishment Republicans are looking for new ways to assert themselves. Anti-Trump activists have started a new group, the Republican Accountability Project, promising to raise and spend $50 million to defend Republicans who voted for impeachment against primary challenges.

The Republican Main Street Partnership, a group of center-right Republicans, is launching a national digital ad campaign to tell voters alienated by Trump that there is another side of the party. “We want to be sure they know they have a home,” said Sarah Chamberlain, head of the group.

It’s early to be sizing up Trump’s ongoing impact on his party, as 2022 primaries are months away. But not in Virginia.

While the state has tilted increasingly Democratic — Biden won it by more than 10 percentage points, about twice Hillary Clinton’s margin in 2016 — Republicans see this as a chance for a comeback because of history: In most gubernatorial election years (2013 was an exception) the Virginia race is won by the party not in the White House.

But their challenge is compounded by the tumult surrounding the Trump legacy.

The former president has strengthened Republicans’ already formidable hand in the state’s vast rural precincts, but his presidency has played poorly in the state’s cites and growing suburbs, especially in northern Virginia.

“Trump said he was going to ‘drain the swamp,’ but he drained the most populous part of the state of Republicans,” said Bob Holsworth, a veteran political analyst in Virginia. If Chase were the nominee, he said, “there’s no possible way she would be competitive statewide.”

Chase, a third-term state senator, has cultivated a Trump-style brand with anti-establishment rhetoric, disdain for what she calls political correctness and a big social media following. She says she is called the “Annie Oakley of the Senate” because she has carried a firearm in the state Capitol. She refuses to wear a mask to control spread of the coronavirus. She embraces the “Trump with heels” comparison.

“I call myself a firebrand Republican,” she said in an interview, adding that she had not sought Trump’s endorsement. “I’m not a politician. I’m a business person. I don’t speak politically correctly. I call things as I see them.”

She gained notoriety after she spoke in Washington ahead of Trump’s Jan. 6 rally speech, and endorsed his false claims that the 2020 presidential election was “stolen” from him. “We are here today to stand with President Trump: Can I hear an amen?” she said. “We know this election was fraudulent.”

Chase left the scene before the rally turned into a violent mob that ransacked the Capitol. But her Facebook account was suspended and she faced a Senate censure vote because she made false statements about leftists being responsible for the violence, and showed sympathy for the pro-Trump insurrectionists. “These were not rioters and looters; these were Patriots who love their country,” she wrote on Facebook.

Speaking in the Senate, Chase said that she was not condoning violence but that the “patriots” she referred to were those who were peaceful.

Although the controversy has made it easier for other Republicans to cast her as a fringe figure, it could also endear her more than ever to Trump supporters.

“Some people are telling me to wear it like a badge of honor,” she said of a censure.

A multi-candidate field is expected on both sides of the governor’s race, with former Gov. Terry McAuliffe making a comeback bid on the Democratic side.

The contest among Republicans has been bogged down by uncertainty about whether to hold a primary or convention. Advocates of a convention think it will make it harder for a candidate like Chase to win nomination with a small plurality. Chase has been calling for a primary, saying she worries that party leaders would rig a convention against her.

At one point, Chase threatened to run as an independent if the party did not hold a primary. She then backed away from the threat and said she would remain in the contest whichever nomination method the party uses. But after the central committee inconclusively ended another meeting on the question last weekend, Chase dangled the threat again on Twitter.

“If Republicans don’t come up with some direction and rules soon I’m going to start the Patriot Party here in Virginia,” she said. “I will not follow a parked bus.”