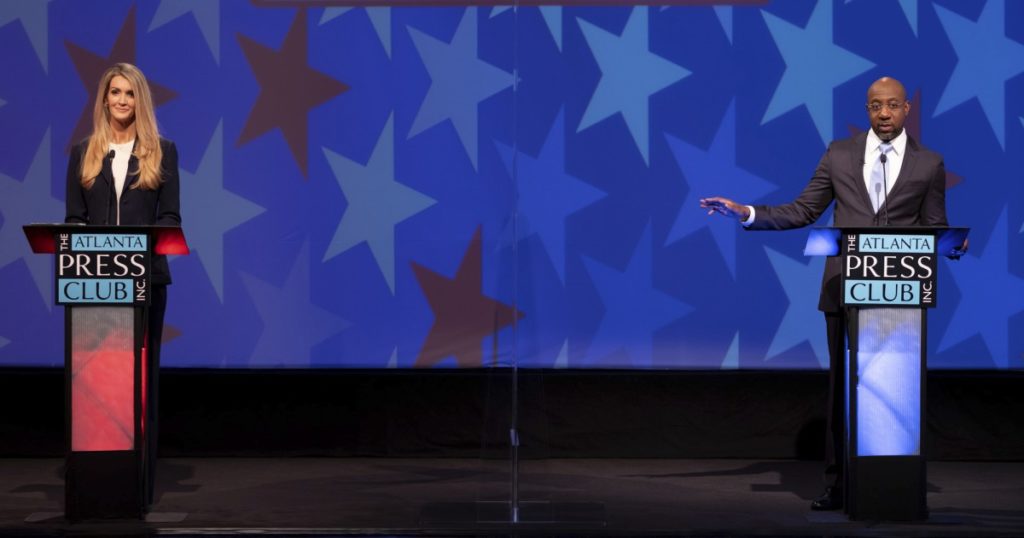 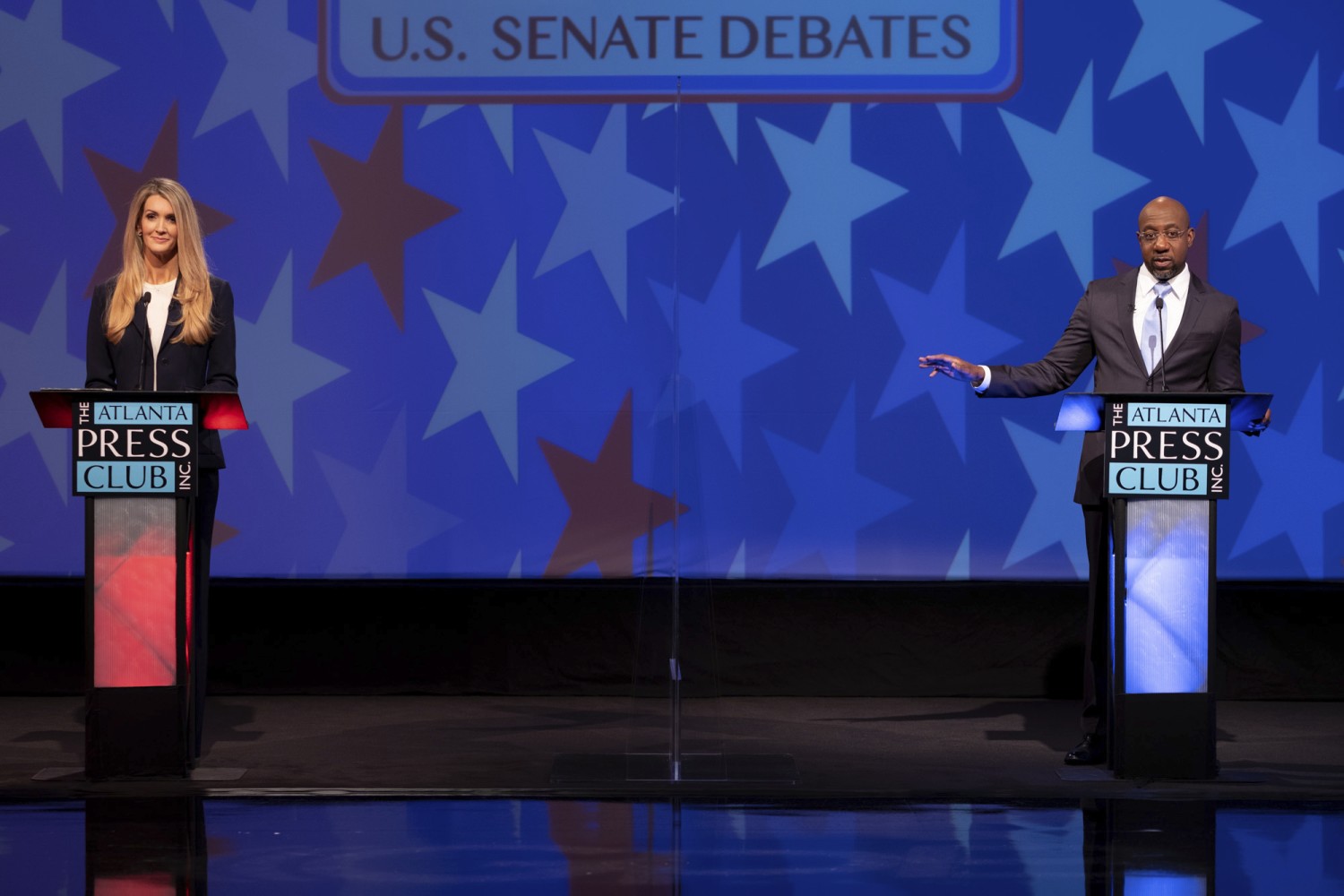 With spending in Georgia’s twin Senate runoffs rocketing toward record levels, Republicans appear to be gaining a significant advantage on the state’s airwaves as heavy spending by outside groups finances a flood of mostly negative ads.

The Republican edge marks a sharp reversal from the general election, in which Democrats largely outspent their opponents in key races nationwide.

Much of the Republican advantage comes from a set of campaign committees tied to Senate Majority Leader Mitch McConnell (R-Ky.) that are raising and spending huge sums on the two races.

How much that will matter remains unknown. Despite the big Democratic edge in spending this fall, for example, Republicans won the bulk of the hotly contested congressional races. Moreover, Georgia airwaves have been saturated with campaign advertising for months, leaving unclear how many voters can be turned out by more of the same.

Any potential for diminishing returns, however, doesn’t appear to have slowed the outpouring of donations to the Republican effort.

“We’re going to spend whatever it takes to hold these seats. The feeling is, it’s all on the line here,” said Jack Pandol, the spokesman for four political committees controlled by McConnell that have been among the biggest spenders in the race.

“We’re just finding donors are incredibly dialed in to the necessity of protecting the Senate majority,” he said.

Both sides depend heavily on money flowing from out of state. California is the leading source of small-dollar donations for both sides, Federal Election Commission filings show.

Where the big-money donations come from remains shrouded. Political committees do not need to disclose the names of their major donors until late this month, and some, including some of the biggest-spending GOP groups, are set up under rules that allow them to keep donors anonymous.

Which party has the Senate majority could determine the fate of tax changes and other legislation worth hundreds of billions of dollars. That makes campaign contributions a potential high-yield investment for major corporations and wealthy individuals in addition to those motivated by ideology or partisanship.

Democrats head into the new year with 48 Senate seats, including two independents who caucus with them. If they win the two seats at stake in Georgia, they would have effective control, since Vice President-elect Kamala Harris would hold the tiebreaking vote.

One of the Georgia races is for a full six-year term, pitting incumbent Republican Sen. David Purdue against Jon Ossoff. The other is a special election covering two years. In that race, the Rev. Raphael Warnock, the Democrat, is trying to unseat Sen. Kelly Loeffler, a Republican who took office in January, filling a vacancy.

Democratic strategists expressed concern about being outspent in the state, although campaign officials noted that many of the attacks featured in the ads are by now well known and unlikely to persuade voters who haven’t already been convinced.

“David Perdue and Mitch McConnell spent more than $43 million to lie about Jon Ossoff in the general election, and nobody believed them,” said Ossoff’s campaign spokesperson Miryam Lipper. “They can spend all the money they want to try their failed strategy again,” she said.

The tenor of the ads on both sides have been sharply negative, with Warnock the prime target of GOP attacks.

In the first round of the special election — a free-for-all featuring 21 candidates, including eight Democrats and six Republicans — Warnock largely escaped attack as Loeffler focused fire on her leading Republican rival. As a result, Warnock, the pastor of Atlanta’s Ebenezer Baptist Church, entered the runoff with a more favorable image than any of the other candidates.

Republicans have now spent tens of millions of dollars to try to change that, with repeated ads characterizing him as “dangerous” and a “radical.” The ads against both Democratic candidates prominently feature footage of urban unrest and accusations that they would vote to defund police and take money away from the military. Democrats have countered with ads accusing both Loeffler and Perdue of corruption.

Up through this week, the two sides have spent roughly equivalent amounts. Democrats have concentrated on the expensive Atlanta media market, where their voters are concentrated, while Republicans have spent more of their ad dollars in the nine markets that cover the rest of the state.

Democrats have had some advantage because a much larger share of their spending has been from the candidates themselves. By law, candidates are able to buy ads at favorable rates, so the same amount of money buys more exposure for a candidate’s ad than one booked by a PAC or another group.

In the Ossoff-Perdue race, Democrats and allied groups have spent roughly $42 million on advertising so far versus $39 million for the GOP side, according to the latest data from AdImpact, which tracks TV and radio spending.

In the special election runoff, the Republican side has spent slightly more so far — $45 million versus $42 million, AdImpact’s figures show.

That rough equality is set to change, however, as Republican outside groups have booked tens of millions of dollars of advertising for the remaining four weeks leading up to the Jan. 5 election day.

Combining ads that have aired so far and those that have been booked for later, the Republican side is currently on track to have a $118 million-to-$76 million advantage in the Perdue-Ossoff race and a $126 million-to-$81 million edge in the Loeffler-Warnock contest.

If all that future advertising materializes, total ad spending would top $400 million, and the candidates haven’t yet reserved their final blocks of time. The previous record for spending in a single Senate contest belongs to this year’s race in South Carolina, where incumbent Sen. Lindsey Graham and his Democratic challenger, Jaime Harrison, combined to spend $238 million, according to the Center for Responsive Politics, which tracks spending.

McConnell’s Senate Leadership Fund and three affiliated groups, American Crossroads, PeachTree PAC and One Nation, have spent or reserved nearly $140 million in advertising already, or about 35% of the total.

“Georgia voters are absolutely seeing our messages in a multitude of mediums,” said Pandol.

Although all four GOP groups are linked, they’re separately established to take advantage of the complexities of campaign finance law. One Nation, for example, is set up under legal provisions that allow it to keep its donors entirely secret, while the other three disclose at least some of theirs.

Last month, Karl Rove, the Republican strategist who is leading One Nation’s efforts to raise money, warned on Fox News that Democrats were going to outspend them.

“Nobody should kid themselves; we are going to be outspent in Georgia, no ifs ands or buts,” he said.

Instead, a flood of Republican money has poured in. The Senate Leadership Fund raised $104.2 million nationwide between Oct. 15 and Nov. 23, bringing its 2020 cycle haul to $384.8 million, according to filings with the Federal Election Commission. It spent $112.6 million in the final stretch of the regular campaign and had $60.8 million left in the bank.

Democrats have had less national money available to them for the runoff. Their Senate Majority PAC raised $90 million in the home stretch, for a total of $283.5 million for the 2019-20 election cycle. The group spent nearly all its money on the unsuccessful effort to gain control of the Senate in November and ended the month with only $2.1 million on hand.

The Senate Majority Fund so far has only reserved a small amount of ad time in Georgia. Two other groups affiliated with Senate Democratic Leader Charles E. Schumer of New York — Georgia Honor, which backs Warnock, and Georgia Way, which backs Ossoff — have spent more heavily, reserving about $23 million of ads between them.