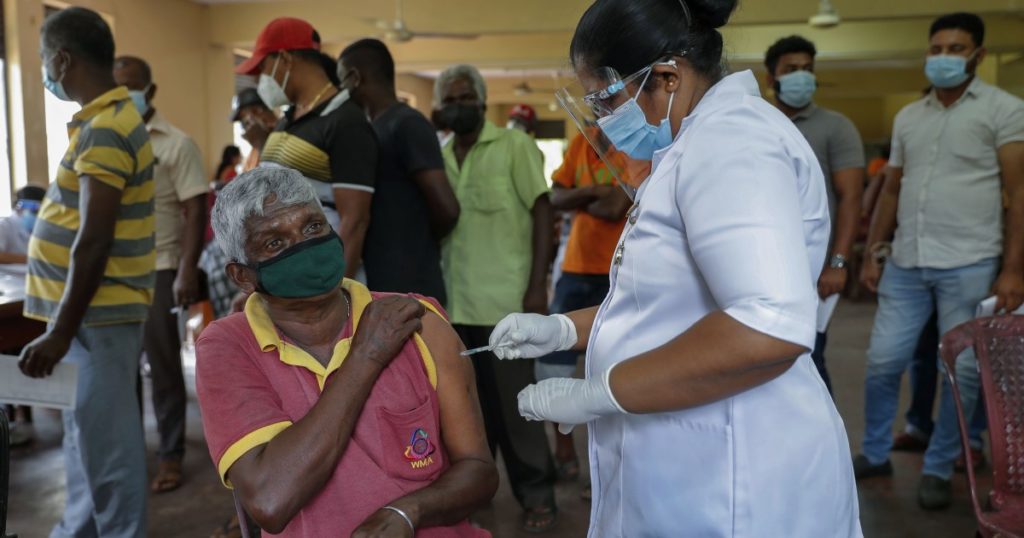 Over and over, President Biden has emphasized the need to inoculate as many Americans as quickly as possible, all but staking his presidency on successfully shielding the country from COVID-19. Yet the uneven vaccination effort globally is expected to leave large swaths of the planet unprotected for years, potentially frustrating his effort.

Uncontrolled spread anywhere in the world can allow the virus to mutate to evade vaccines already developed — and then threaten the United States again.

So far, that hasn’t happened. The vaccines being injected into American arms are believed to be at least somewhat effective against variants that have emerged in the United Kingdom, Brazil and South Africa and are more contagious than the version that has killed nearly 500,000 people in the United States.

However, mutations are unpredictable. On Tuesday, Dr. Anthony Fauci, the federal government’s top expert on infectious diseases, repeated his warning about what he calls a “clear and present danger.”

“Since this is a global pandemic, it will require a global response. So we have to pay attention to what’s going on in the rest of the world. Otherwise, we will be constantly threatened by variants and different lineages of the virus that will have evolved outside of the United States,” he said on “L.A. Times Today,” a daily show produced in partnership with Spectrum News 1. The interview is scheduled to air at 7 p.m. PST.

How the United States participates in the global inoculation effort is one of the most critical questions hanging over Biden’s agenda. The pandemic has turned vaccines into an enormously valuable commodity, and an opportunity for ambitious countries to earn goodwill and expand their influence.

Russia has developed its own vaccine, Sputnik V, and has begun selling it to countries in Latin America. China is taking similar steps in Southeast Asia, and it’s pledged 10 million doses to COVAX, an international partnership intended to ensure equitable access to vaccines. That is a drop in the planetary bucket, but an indication of China’s commitment. The U.S. has not made a similar promise, although it’s allocated $4 billion for the global effort.

“You will be seeing us playing our role in the global response, particularly in the arena of vaccinations,” Fauci said.

Until more of the world’s population is inoculated, the possibility of unchecked spread anywhere on the globe raises the threat of new, more deadly variants. If that happens, scientists may need to race back to the lab to redesign vaccines or develop booster shots. More lives would be at risk, potentially extending restrictions on daily life that have choked businesses, closed schools and isolated people from loved ones over much of a year.

“We could be back to square one. And that’s a pretty frightening prospect,” said J. Stephen Morrison, director of the Global Health Policy Center at the Center for Strategic and International Studies.

“We cannot possibly ignore these variants and think that we’re not putting Americans at risk,” Morrison said.

Rochelle Walensky, director of the U.S. Centers for Disease Control and Prevention, has warned Americans “to please keep your guard up” though the country is seeing fewer cases and hospitalizations.

“The continued proliferation of variants remains of great concern and is a threat that could reverse the recent positive trends we are seeing,” she said last week.

Biden has been more globally minded than former President Trump, reversing his predecessor’s decision to withdraw from the World Health Organization and joining COVAX.

“We are back on the global scene,” Fauci said at a COVID-19 task force briefing Feb. 3. “I just want to remind people that this is a global effort, and the more we get the virus controlled globally — and we will be part of that process, as part of the global community — the better off we will be.”

When it comes to distributing vaccines, however, so far it’s still America first. Asked Friday about the U.S. “essentially hogging the global supply,” White House Press Secretary Jen Psaki said the president’s “focus now is on ensuring that the American people are vaccinated.”

“We recognize, and the president feels, that it is vital and essential to ensure that as many people around the world are vaccinated. That will keep everybody safer,” Psaki said. “But his first priority is ensuring vaccines are in the arms of Americans.”

The Biden administration has said it’s on track to have 600 million doses from Pfizer and Moderna by summer’s end, enough to inoculate 300 million Americans.

Thomas Bollyky, director of the global health program at the Council on Foreign Relations, said the United States should consider providing vaccines overseas once high-risk Americans and healthcare workers receive them.

“From a public health perspective, it’s a little harder to defend seeking to vaccinate low-risk members of the public before trying to get this pandemic under control abroad,” he said, adding, “‘No one is safe until everyone is safe’ sounds cliche, but it’s true.”

“Vaccine nationalism is not just morally indefensible. It is epidemiologically self-defeating and clinically counterproductive,” he wrote in Foreign Policy magazine on Feb. 2. “Allowing the majority of the world’s population to go unvaccinated will not only perpetuate needless illness and deaths and the pain of ongoing lockdowns, but also spawn new virus mutations as COVID-19 continues to spread among unprotected populations.”

COVAX is aiming to vaccinate 20% of the population of low-income countries this year. Christine Jamet, director of operations for Doctors Without Borders, said she is appalled by the inequities in global distribution.

“This is a global pandemic that requires a global spirit of solidarity if we truly hope to bring it under control,” she added.

Malawi and Mozambique have not received a single dose. Mozambique’s cases are almost seven times higher than they were at the peak of its first COVID-19 surge last year. In Malawi, where new cases doubled every four to five days throughout January, hospitals are approaching full capacity and almost 1,300 health workers have tested positive since mid-December.

Marion Pechayre, the organization’s head of mission in Malawi, said the situation “will soon be untenable.”

The entire world isn’t expected to be vaccinated until 2024, leaving billions of people vulnerable for years.

“More equitable distribution of COVID-19 vaccines would help contain the pandemic sooner, and thus minimise the risk of new variants of the virus arising, against which existing vaccines might be less effective,” according to a report published Friday in the Lancet, a British medical journal.

A major challenge, however, is producing enough vaccines quickly. “Currently, few countries have the domestic capacity to rapidly produce COVID-19 vaccines on their own,” the report said, “and instead will need companies to actively share knowledge, technology, and data with domestic manufacturers.”