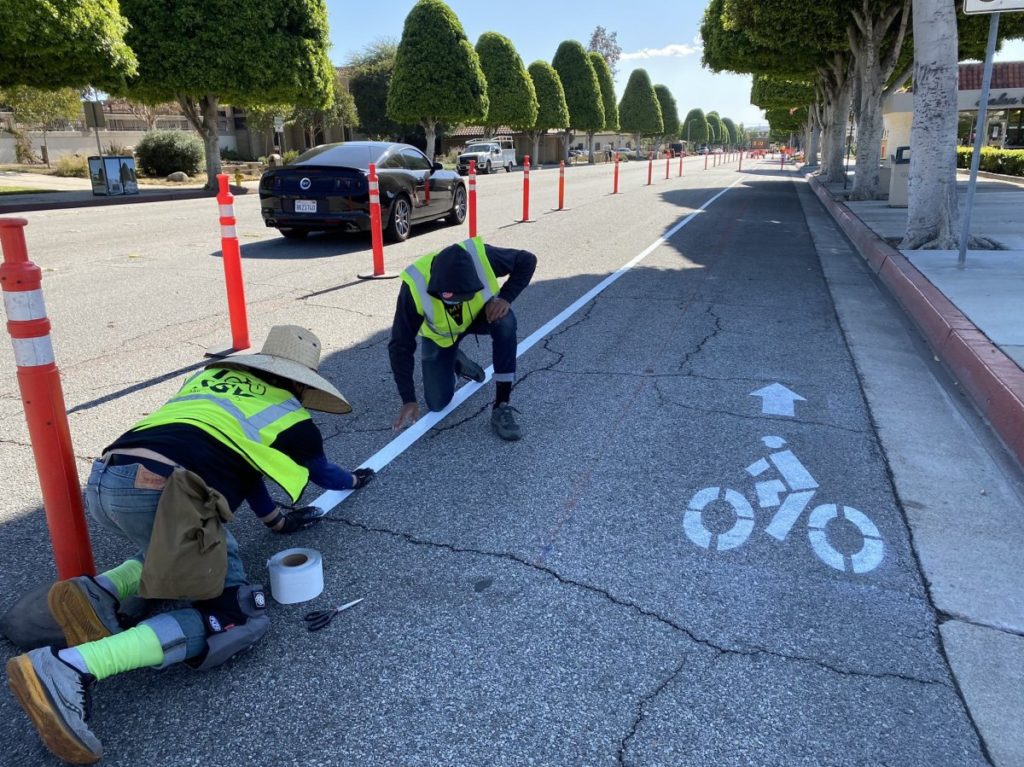 Last month, The City of Glendora installed temporary crosswalk enhancements and protected bike lanes on Glendora Avenue between Foothill Boulevard and Ada Avenue. The project comes complete with 24-foot reflective tape to make the crosswalk more visible, and delineators sand planters on the bike lane to create a buffer for cyclists from traffic on the rest of the road.

The Glendora Avenue Demonstration Project was funded through the city and the San Gabriel Council of Governments (SGVCOG). Glendora committed $16,000 for design and materials, including staff time, and SGVCOG committed $30,000 in Metro funds that were initially earmarked for open street events but have been repurposed for other uses due to COVID-19— $18,000 were used to purchase the planters.

The project is part of a broader effort by the City to improve first/last-mile connections to the future Metro L Line (formerly Gold Line) Glendora station. With the 9.1-mile Glendora to Pomona L Line extension expected to be completed by 2025, the City wants to make it easier for pedestrians and bicyclists to travel between the City and the station.

The corridors being considered for improvements are:

In addition to improving pedestrian and bicycle connections, the corridors also face safety challenges for people who already walk and bike. From 2014-2018, the four corridors have seen a total of 116 traffic collisions, according to California crash data. Seventeen involved cyclists, eight involved pedestrians.

Planning for the first/last-mile improvements for the Glendora station has been going on for years. Since mid-2018, more than 500 people have participated in outreach events. In late 2019, based on community direction, the four corridors were chosen for improvements.

Most recently, the City hosted one in-person community workshop in January and a virtual workshop in March. In the virtual workshop, 127 people viewed the workshop material. 25 people responded to the survey of the projects, with 18 respondents approving, and seven disapproving.

Currently, the city has just about wrapped up its planning efforts and is applying for funds to design and build the project through through the fifth cycle of the Active Transportation Program. The City has requested $4.2 million to build the Glendora Avenue improvements, and $3.1 million for the Foothill Boulevard improvements.

Yet, while the City waits for funding to start designing and building, the demonstration project installed last month is being used as a catalyst to keep the dialogue going around the City’s broader effort, said Steven Mateer, Glendora’s transportation superintendent.

After seeing the positive reaction from last year’s half-day pop-up Glendora: Roll to the Stroll, as part of the Southern California Association of Government’s Go Human program, residents and visitors to Glendora have come to appreciate how these activities help in doing outreach, Mateer said.

Heavy-duty concrete planters now being forklifted into place by #Glendora staff to physically protect the bike/rollway. A high-visibility crosswalk is also in at Foothill Blvd. Later this week the planters will be filled with Japanese boxwood from Glendora Gardens. pic.twitter.com/P9gvAhYO7v

Sign-up for our SGV Connect Newsletter, coming to your inbox on Fridays