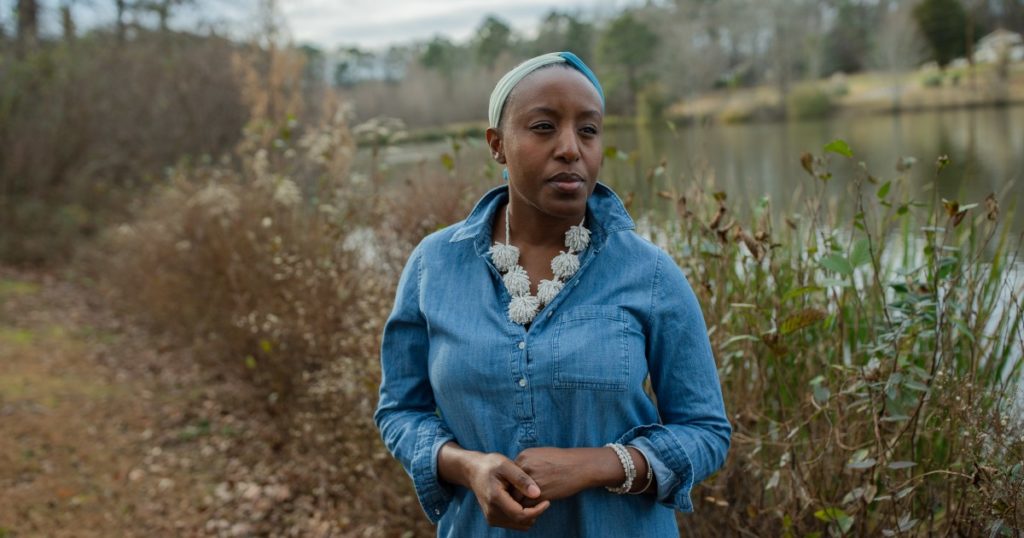 As a child in rural, 1950s Georgia, Ralph Evans early on learned the rules of Jim Crow.

In his 20s, when he got out of the military, Evans didn’t return to Georgia, instead following a well-blazed path to Detroit, where he worked for his older brothers, before eventually settling in the Bay Area.

He worked as a criminal investigator for the Treasury Department, raised three children and sent a daughter, Dana, to UCLA and another, Kesha, to Berkeley, but never felt entirely at home in California.

“I never really was away” from Georgia, he said. “Physically, yes, but I was always attached mentally. It’s always been home.”

When the time came to retire, the pull of family and friends, the lower cost of housing and the ties of memory drew him back South, where he settled in fast-growing Henry County, half an hour south of Atlanta’s restaurants and malls. In 2008, Evans and his wife, Alice, bought a 4,500-square-foot, four-bedroom brick home overlooking a lake in an upscale subdivision with a clubhouse and tennis courts.

They were part of a wave that was transforming the county and has now shifted the balance of the nation’s politics.

President-elect Joe Biden’s November victory in Georgia by fewer than 12,000 votes depended on his dominance in places like Henry County, where he won just under 60% of the vote. No county in the nation had as large a swing to the Democrats between 2016 and 2020 as this fast-growing swath of suburbia, according to data analyzed by TargetSmart, a Democratic vote targeting firm.

Georgia’s election results this year also marked the first time since the Reconstruction era of the 1870s that in any state, for the presidential candidate who won, “the majority of that candidate’s coalition was Black voters, not white voters,” said Bernard Fraga, a political science professor at Emory University in Atlanta.

“The largest group in Biden’s coalition was African Americans in Georgia,” he said. “That’s never happened.”

In just over a week, Democratic hopes of winning control of the Senate will rise or fall on whether the party’s candidates in twin runoff elections can repeat that pattern. Polls show both races are tight. Statewide data on early voting so far shows Black voters constituting a larger share of the vote than they did at this point in early voting for the general election, an encouraging sign for Democratic chances.

The degree of Biden’s success in Henry County caught many political observers by surprise. “I expected it to be much closer,” said Emanuel Jones, the Black Democratic state senator whose district includes the county. “We were praying that we got to 54%.”

But while the change in the state’s politics bloomed faster than many expected, its roots are deep, growing out of a generation-long trend of migration back to the South — and to the Atlanta metropolitan region in particular — by hundreds of thousands of Black families.

That reflects a crucial pattern in American politics, said Keneshia Grant, a political scientist at Howard University in Washington, D.C.

“Migration has been especially important to the story of Black participation in American politics,” said Grant, author of a book, “The Great Migration and the Democratic Party,” that traces the significant expansion of Black political influence that came about as a result of the move to Northern cities from the end of World War I through the 1960s.

As that pattern of northward migration began to reverse, Atlanta emerged in the 1990s as the largest destination for Black migration in the country, a trend that accelerated through the early 2000s.

“In the same way that the Great Migration is a long story, this return migration is also a long story,” Grant said. “When you want to understand what’s happening in Georgia in 2020, you have to look at it as the result of something much longer.”

Many factors have gone into the shift of Georgia’s politics, including the intensive voter registration and mobilization campaigns led by Stacey Abrams, the party’s 2018 candidate for governor who is widely expected to run again in 2022. Those campaigns, however, could succeed only because of the underlying changes in the state’s population.

In 2000, Black residents made up just one-seventh of the population in Henry County, which remained largely rural. By the time Ralph and Alice Evans bought their home 12 years ago, the county’s overall population had grown more than 60%, and Black residents were one-third of the total.

When their daughter Dana Evans, 43, joined them two years ago to help care for her ailing mother, the county’s Black population had more than quintupled since 2000, in large part because of migration from other states. White residents now make up less than half the county’s population.

Across the 10-county Atlanta region, that pattern of racial diversification is increasingly the case, as is the resulting political change. Henry County’s neighbor to the east, Rockdale County, had the second-biggest Democratic shift of any county in the nation in 2020. Of the 20 counties nationwide with the biggest swings toward Democrats, Georgia had seven.

Although many political analysts thought North Carolina — a state that Barack Obama carried in 2008 — provided Democrats’ best shot at making a breakthrough in the Southeast, Georgia had “a little bit more of each of the components that make things favorable to Democrats,” said Tom Bonier, the head of TargetSmart: a larger share of Black voters, more college-educated whites, a population that is more urban and, on average, younger.

Between 2000 and 2019, Georgia added 920,000 Black voting-age residents according to data from the non-partisan Pew Research Center. Of this year’s battleground states, Georgia’s electorate had by far the largest share of Black voters, roughly one-third, compared with about one-fifth in North Carolina and one-eighth in Michigan, Pew found.

With Georgia’s Latino and Asian voter populations also growing, the white share of the state’s voters dropped 11 points since 2000.

In addition to being people of color, recent migrants to the state are overwhelmingly college educated, with 87% of the new voting-age residents since 2010 having at least a bachelor’s degree, said Andrew Lim of New American Economy, a research and advocacy group funded by former New York Mayor Michael Bloomberg.

“That was a huge change” for a state in which until recently fewer than one-third of the voters were college-educated, Lim said.

“Georgia, and Atlanta in particular, has built a reputation as a place for young professionals to go that’s lower cost” than the Northeast or the West Coast, Lim said. A four-bedroom house can still be purchased for under $250,000 across many of the southern counties of metro Atlanta. The Atlanta area is also widely seen as welcoming to Black families, which has been crucial for many contemplating a move to the South.

The results have changed politics locally as well as nationally. In November, Henry County voters elected their first Black sheriff.

“It’s been a slow, systematic change in leadership,” said Reginald Scandrett, the new sheriff, who ran on a platform of reducing recidivism and building public trust in law enforcement.

“People have been consistently challenged and hurt and frustrated,” he said. “I think people are begging for change and just think it’s time go in a fundamentally different direction.”

To Shereda Jeffries, 42, an elementary school teacher who grew up in Savannah and moved to Henry County in June, Scandrett’s election came as a sign of a growing mood for new leadership after the national protests this summer on police brutality.

The shift in political power is also sparking a reevaluation of Georgia’s racist past. This summer, the Henry County commission voted to remove a statue of a Confederate soldier that had stood for more than a century in the town square in the county seat of McDonough.

And local leaders have taken steps to celebrate the county’s Black political history, renaming a bridge and establishing a heritage trail in honor of the Rev. Martin Luther King Sr., the father of the civil rights leader. King was born and raised in Stockbridge before moving to Atlanta, where he became pastor of the city’s Ebenezer Baptist Church.

That’s what Dana Evans, an interior designer, found when she, her husband and three children joined her parents, moving from Bethesda, Md., a suburb of Washington. She initially felt she had entered a different world as she drove out of her parents’ upscale subdivision past ranch homes with Trump signs in their front yards.

There was less political consensus among white and Black residents, she said, than in liberal cities like Los Angeles or Atlanta or her previous home in the D.C. suburbs.

“There’s such a hard political divide nowadays,” she said. “Here you feel like you leave the subdivision and your neighbor maybe hates you. And that’s weird.”

But Stockbridge, she soon discovered, was also the blackest city she had ever lived in. For the first time, her two young daughters and son were surrounded by Black children when they took swimming and tennis classes. All their instructors were Black too.

“If I placed a pin on a map, this would not have been it,” she said. “But I get it now; I understand that concept of cost of living. I want stability for my children.”

When Biden won, Evans felt she had political effect in a way she never had before.

“In Maryland, in D.C., my vote meant nothing, right?” she said. “Here I get to tell my people in D.C. I made the difference.