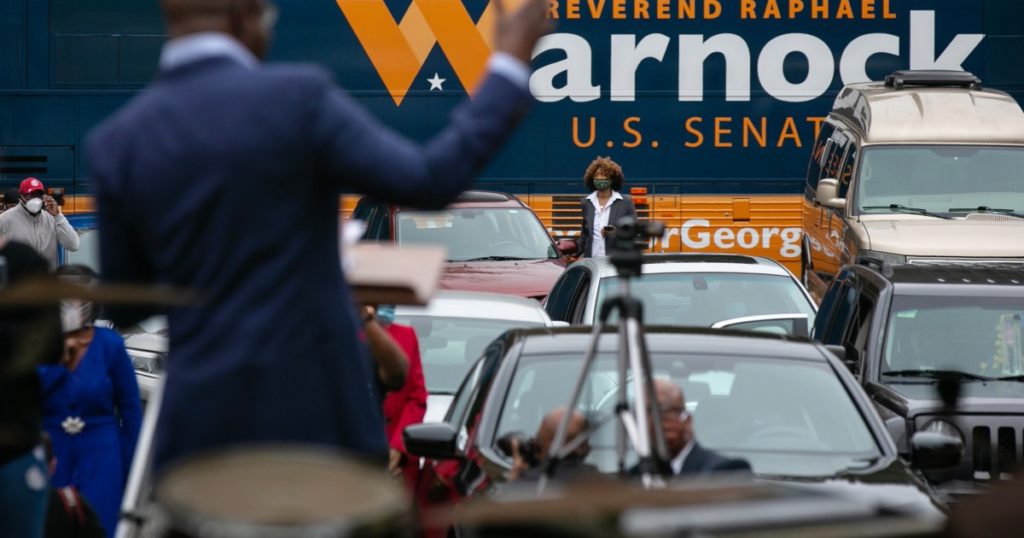 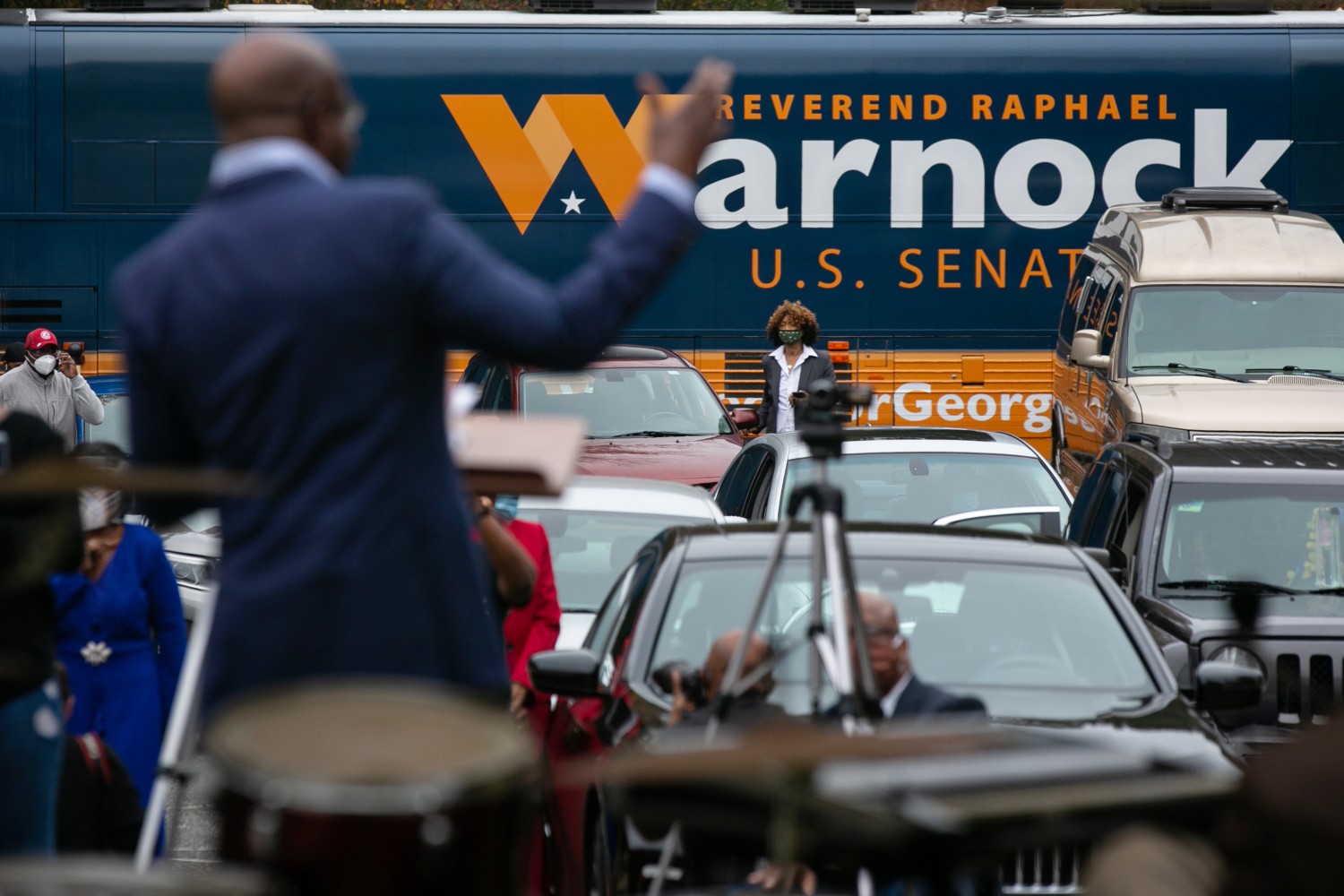 Tolan J. Morgan, pastor of Fellowship Bible Baptist Church in the geographic center of a state at the center of the political universe, says he and his wife have been so deluged by campaign ads they have stopped watching live television.

Instead, the couple is recording their favorite shows so they can fast-forward through the onslaught of political advertising tied to next week’s high-profile Senate runoff races — including a commercial from a candidate complaining about all the advertising.

“It’s just overkill,” said Morgan who hosted one of the candidates, the Rev. Raphael Warnock, at his church in Warner Robins, a two-hour drive south of Atlanta. “Every day, all day long, there’s a commercial. Like, every show, every commercial break.”

With early voting well underway and both sides expecting close races, over $485 million in ad time has been used or reserved ahead of the special election Tuesday that will determine which political party controls the U.S. Senate. More than 275,000 political ads have aired in the state since Nov. 5, according to AdImpact, which tracks TV and radio spending.

It’s not clear that saturating the airwaves with so many ads will change many minds, experts say, especially since the same candidates already blanketed the state ahead of the Nov. 3 election. As results in that election made clear, campaign spending does not ensure victory: At least three heavily outspent Republican incumbent senators defeated well-financed challengers.

“If you’ve heard it before, nothing’s really going to change your opinion about who you support,” said Washington State University professor Travis Ridout, co-director of the Wesleyan Media Project, which tracks political advertising. “I think a lot of people have probably already decided given this is the second [election].”

Still, with control of the Senate at stake, and hundreds of millions of dollars still flowing into the races in the final days, campaigns and outside groups don’t want to be left with regrets over leaving cash on the table. With only so many doors to knock on and their get-out-the-vote plans set weeks ago, campaigns have few places left to spend their cash reserves.

“It’s difficult at the last minute to figure out something else to do with that money,” Ridout said.

Depending on the time of day, television viewers can expect to be confronted by campaign ad after campaign ad before getting back to the “Today” show, “Judge Judy,” a college football game or “Family Feud,” some of the most popular shows to run ads during. The glut is heaviest, AdImpact data show, in the 8 a.m. hour, between 5 p.m. and 8 p.m., and around the 11 p.m. news.

The closest thing to a respite from political ads comes in the 3 a.m. hour. Fewer than 1,000 ads have run at that times since the November election.

Though they generally pay more than candidates for airtime under federal law, outside groups are also piling on. Conservative super PAC American Crossroads and its counterpart, the Senate Leadership Fund — which is affiliated with Senate Majority Leader Mitch McConnell (R-Ky.) — have spent almost as much as Loeffler and Perdue combined on ads. The National Rifle Assn.‘s Political Victory Fund PAC is airing commercials telling people to “vote like your safety depends on it.” The Georgia Farm Bureau is encouraging farmers to vote.

Even a California televangelist, Jack Hibbs of Calvary Chapel Chino Hills, has purchased airtime through his PAC to implore Georgians to vote their “Christian worldview.”

While candidates and the political parties have enough money to cover the entire state, a few outside political groups have avoided the expensive Atlanta market. They figure their message has a greater chance in smaller markets of being heard and boosting voter participation, or dissuading their opponents’ supporters from turning out.

Democratic-aligned super PAC American Bridge 21st Century is running $5.7 million in ads in rural areas, all featuring Republicans who are planning to vote for Democrats, a tactic that helped narrow Republican margins during the presidential election.

The advertisements are overwhelmingly negative, focused on national issues and aimed at turning out as many red-meat voters as possible rather than trying to persuade swing voters. Ads from the Democrats accuse the GOP incumbents of not doing enough to address the COVID-19 pandemic and the faltering economy. Republicans and their allied groups’ ads warn of the consequences of handing control of the Senate to Democrats.

Loeffler, for example, began airing a commercial this week urging Georgians to “stop the radical left,” “stop socialism in its tracks” and “save America” by voting.

Her opponent, Warnock, has countered that Loeffler has taken his words out of context, and has accused the senator of selling stocks while downplaying the seriousness of the pandemic.

Ossoff, who has spent $89 million, sponsored the most aired ad of the cycle, a 30-second attack ad that alleges Perdue was too busy looking after his stock portfolio after a private briefing on the coronavirus to address the pandemic. It has run 9,633 times in 28 days, the equivalent of 344 times a day.

Perdue’s response, in which he stresses he was cleared of any wrongdoing by the Senate Ethics Committee and the Justice Department for selling stocks at the beginning of the pandemic, and accuses Ossoff of lying about it, is the second-most-aired commercial, having run 9,031 times in 29 days, or the equivalent of 311 times a day, AdImpact’s data show.

Less than a week before the election, the candidates know voters are growing weary.

“Sick of the negative ads?” Warnock says in an ad released by his campaign Wednesday. “Tired of the mail? Ready for the calls to stop? Me too, but there’s still some work to do.”