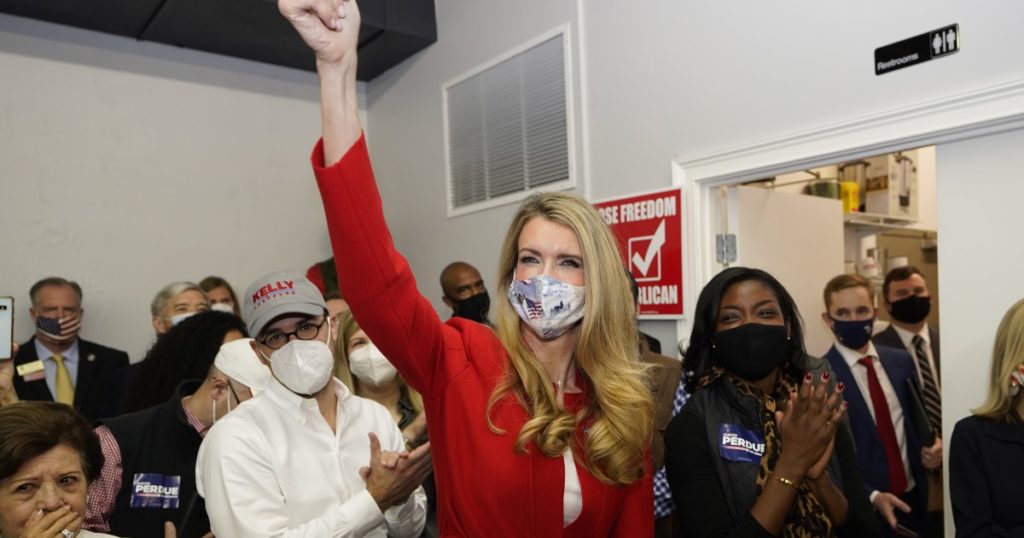 Georgia has unexpectedly become host to a one-state referendum on a national question — which party should control the U.S. Senate? — and the outcome will probably shape the ambitions of Joe Biden’s presidency as well as his party’s future.

Money, media and political artillery are rolling into Georgia, because Democrats have a shot — a back-to-the-wall last shot — at securing a Senate majority if they oust two Republican incumbents forced into runoff elections Jan. 5.

And Republicans are clinging to their last bastion of power in a capital that otherwise will be dominated by Democrats next year.

The overtime campaign in Georgia will be a first test of how much Biden’s victory — in formerly red Georgia and nationwide — is based on a durable new Democratic coalition or is an anti-Trump mirage that vanishes without the president on the ballot.

At issue are the Senate seats now held by Republicans David Perdue and Kelly Loeffler, who face off against Democrats Jon Ossoff and the Rev. Raphael Warnock, respectively, because none of them got more than 50% of the vote on election day, as Georgia law requires to claim victory.

With the results of other Senate races now set, Republicans have 50 seats to Democrats’ 48.

Democrats would seize control of the Senate if they won the two Georgia seats, because the resulting tie would be broken by incoming Vice President Kamala Harris.

That would give Biden a much better chance to win Senate confirmation of his Cabinet choices as well as other appointees and judicial nominees, and to see Congress pass his policy plans, including COVID-19 relief, Medicare expansion and climate change initiatives.

But if Republicans hold their majority, Biden would probably have to scale back his legislative ambitions, avoid naming liberal nominees and sometimes resort to executive orders and federal regulations that he can carry out without Congress.

As for President Trump, the looming runoff elections are helping him keep his party in line as, against all odds, he refuses to concede to Biden.

Most GOP leaders, loath to alienate the president’s supporters when they need high voter turnout in Georgia, are supporting Trump — or at least silently acquiescing — on his unsubstantiated claims of voter fraud and his baseless legal challenges in a number of states.

That includes Perdue and Loeffler. They have called for the Republican secretary of state in Georgia to resign after he challenged Trump’s claims.

“The road to socialism does not run through Georgia,” Loeffler said Wednesday at a jam-packed rally at Cobb County Republican headquarters in Marietta.

The crowd, some wearing “Make America Great Again” masks and “Defund the media” T-shirts, cheered and clapped as Loeffler invoked the names of the Democratic leaders of the Senate and House: “No way, Chuck Schumer, Nancy Pelosi. You’re not going to take Georgia.”

Just as Biden had to fend off relentless GOP efforts to portray him as a left-wing radical, Warnock prepared voters for similar attacks from Loeffler, saying in his first postelection ad: “She’s going to try and scare you with lies about me.” She responded with a digital ad that calls him “too extreme for Georgia.”

“Change has come to Georgia, change is coming to America, and retirement is coming for Sen. David Perdue,” he said. Perdue has mostly lain low since election day, but jointly with Loeffler put out a Veterans Day video on social media.

Voters on both sides are fired up by the prospect of tipping control of the Senate. The nationalization of the race carries some risk for Democrats, however.

Democrats face an uphill fight in a state where Republicans still outnumber them and their chances will hinge on mobilizing both die-hard progressives and more moderate voters, as well as those who typically sit out runoff elections. But each party has a challenge in spurring supporters to vote again just after the holidays.

The math is tough for Democrats. The general election’s winnowing of what were two multicandidate fields into runoffs for the top two vote-getters in each seems to favor the GOP.

Perdue outpolled Ossoff by about 86,000 votes; a third candidate, a Libertarian who now drops off the ballot, won about 114,000 votes.

Loeffler ran behind Warnock by about 344,260 votes in a race with 20 candidates, including a Republican, Rep. Doug Collins, who drew 978,000 votes.

The history of runoff elections for Georgia Democrats is not kind. In the last 30 years, no Democrat in a statewide runoff has beaten a Republican.

Both parties and their outside allies are reviving their get-out-the-vote operations. The Democratic Senatorial Campaign Committee spent more than $5.5 million supporting Ossoff and Warnock, and it is pledging another multimillion-dollar effort to register and turn out voters.

The National Republican Senatorial Committee will also be upping its investment. The Perdue-Ossoff race is for a full six-year Senate term; Loeffler and Warnock are vying for the final two years on the term originally won by a senator who retired early.

Nikema Williams, the chair of the Georgia Democratic Party just elected to succeed the late Rep. John Lewis, said she was not worried about Democratic turnout. The base was already amped up, she said, thanks partly to the efforts of Stacey Abrams, who nearly won the governorship in 2018 and has worked since then to register hundreds of thousands of young, Black and brown voters.

“This election has never been just about Donald Trump. This election is about voters on the ground and amplifying their voices and giving the power back to the voters.”

“We need leaders who bring us together to get this done,” Ossoff says in the ad.

Biden, asked whether he would campaign in Georgia, recently told reporters: “We’re going to do anything we can, that they think we can do to help them.”

Republicans are already rolling in luminaries. Vice President Mike Pence will campaign later this month. Sen. Marco Rubio of Florida, a potential presidential contender in 2024, joined Loeffler on Wednesday and reminded voters of the national political stakes. “This is Georgia’s decision to make, but it’s America that will live with the consequences,” he said.

Trump may weigh in, too. “Trump has the ability to greatly influence this race, by signaling the importance of Loeffler and Perdue coming back to the Senate,” said Scott Reed, a veteran GOP strategist.

The state is a magnet for donations from across the country. About $100 million came from outside groups into the Ossoff-Perdue race through Wednesday, with two-thirds backing the Republican, according to the nonpartisan Center for Responsive Politics.

The center found that about 80% of the money collected by the two Democrats through Oct. 22 came from out of state; Republicans got less than half from out-of-state donations.

Seth Clark, a Democratic strategist and county commissioner-elect in Macon, believes Democrats can only gain from more national attention as Ossoff, Warnock and Biden are unified in a moderate message.

“I just don’t hear any messaging difference between the Senate candidates and the president-elect,” he said.

Their moderate records aside, Ossoff and Warnock are attracting national support even from progressive activists, who see no chance for advancing their agenda if Republican Sen. Mitch McConnell of Kentucky remains leader of a Senate majority.

“We are making a strategic shift from ‘Dump Trump’ to ‘Ditch Mitch,’” Joseph Geevarghese, executive director of Our Revolution, a liberal group associated with independent Vermont Sen. Bernie Sanders, said in a national organizing call. The group emailed its 50,000 members in Georgia, urging them to vote and volunteer.

“I am all in,” said Tiffanie Morris, 43, a flight attendant from southwest Atlanta who said she never thought Georgia would flip from red to blue in a presidential election.

“A lot of people saw how their vote actually counts. So I’m not worried. I’m motivated,” said Morris, who is Black. She had already signed up to distribute campaign material for Ossoff.

Conservative voters are hitting the ground too. The Faith and Freedom Coalition, a Georgia-based conservative group, plans to knock on up to a half-million doors, despite the pandemic.

Among those ready to knock on doors was Deborah Williams, 60. Williams, a small-business owner who drove to the Loeffler rally from a rural Georgia county, said she did not think the presidential election had been fair and she believed that the media had ignored stories of fraud.

With the stakes so high, Williams said she was ready to talk to hundreds of friends and neighbors on behalf of Loeffler and Perdue.

“I intend to do all I can,” she said, “to make sure that people show up and legal, eligible voters are present.”