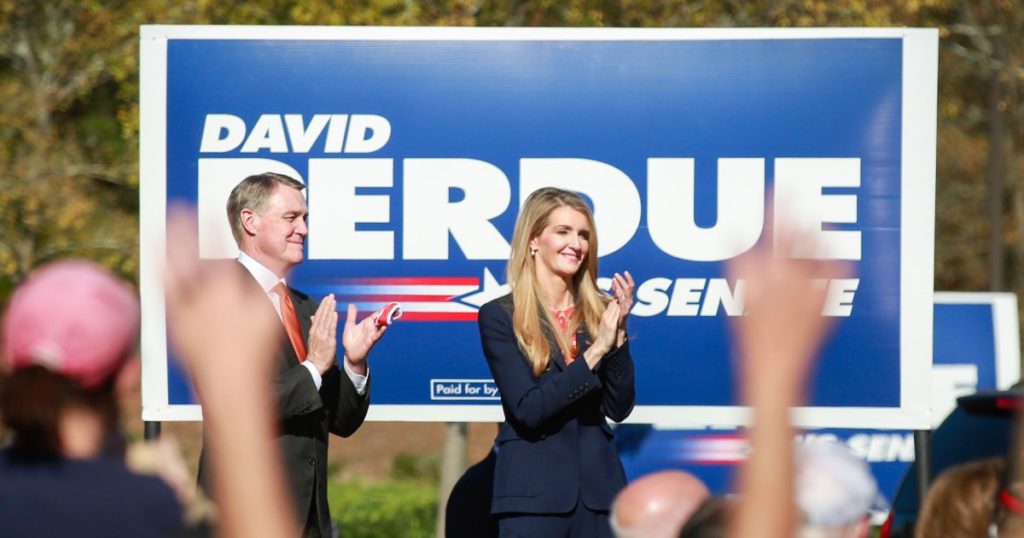 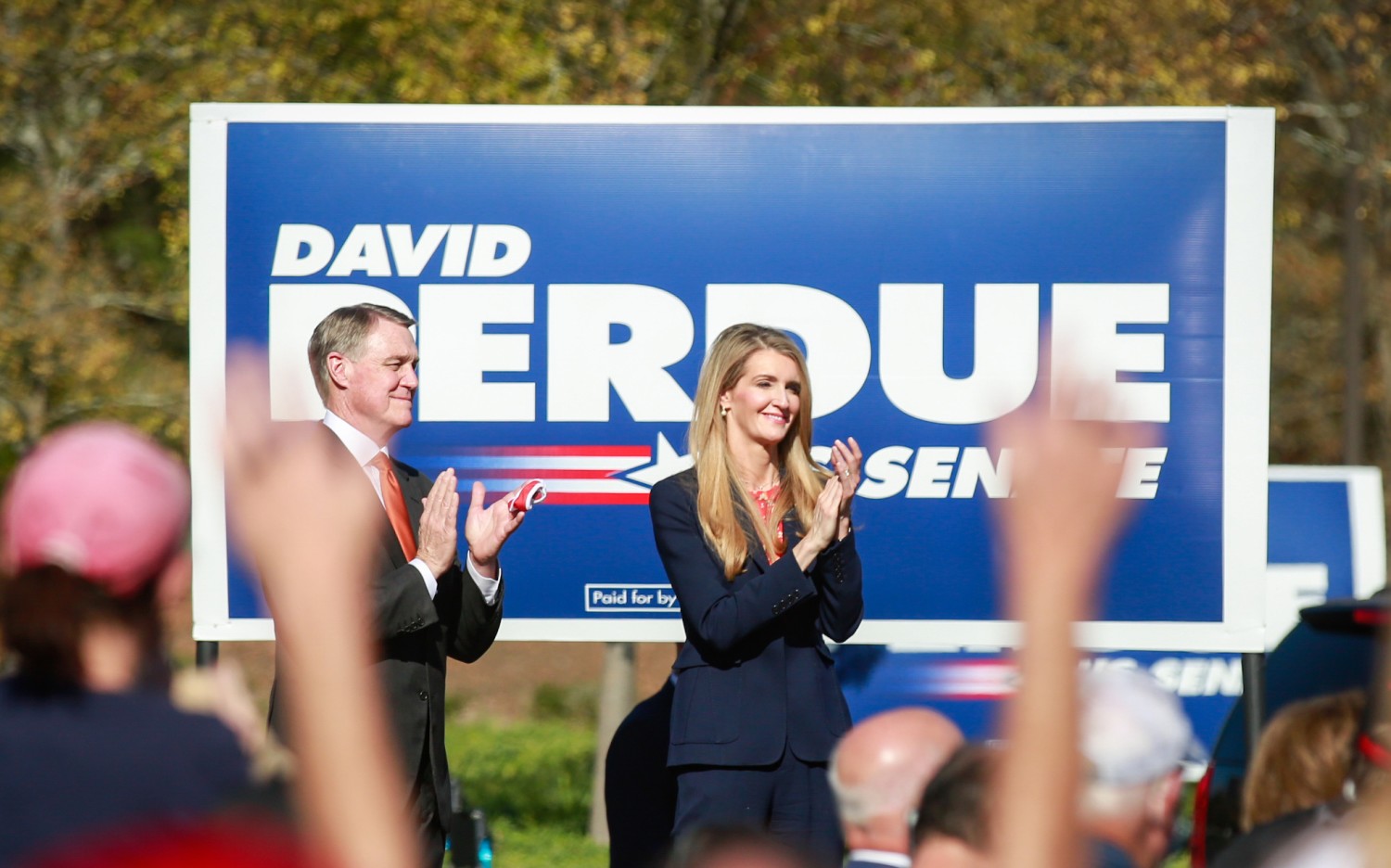 Television ads, campaign rallies and debates for the races are hammering the same national narratives that consumed Georgia and the rest of the country for the last year, centered around President Trump, now-President-elect Joe Biden, and which man’s vision will control Washington next year.

With control of the Senate still in play thanks to the state’s two unresolved races, in Georgia the campaigning never stopped, albeit with some twists.

Now the debate is about whether the state’s two Republican incumbents back Trump’s false claims of winning the state, or conversely, whether the Democratic challengers would help Biden, Senate Minority Leader Charles E. Schumer (D-N.Y.) and Rep. Alexandria Ocasio-Cortez (D-N.Y.) enact a liberal agenda in Washington.

Discussion of local priorities has been swept aside largely by national personalities like Trump, Schumer and AOC, as Ocasio-Cortez is known, and by debates over the handling of the COVID-19 pandemic and reforming the police.

“Georgia issues have been pretty much ignored” in the Senate race, said Charles S. Bullock III, a University of Georgia political science professor. “You hear nothing at all directly about what a candidate would do to improve the conditions of Georgians.”

No talk of an infrastructure plan to improve traffic around Atlanta, or of supporting the Port of Savannah, an economic engine in the state. When “Georgia” pops up in campaign ads, it’s usually just in the tag line at the end — not in the content of the ad.

Without Trump at the top of the ticket to motivate voters of both parties, Republicans and Democrats in Georgia instead are tapping into red-meat politics, hoping to light a fire under as many loyalists as possible to ensure they vote. Gone is any attempt to reach independents or change minds though nuanced messaging.

Republican Sens. David Perdue and Kelly Loeffler are hoping their die-hard supporters will be driven by a desire to prevent Democrats from controlling the Senate, which will happen if both of their challengers, Jon Ossoff and Raphael Warnock, respectively, are elected.

The Nov. 3 election left the party balance in the Senate next year at 50 Republicans and 48 Democratic seats, including two independents who caucus with the party. If Democrats win the remaining two seats, Vice President-elect Kamala Harris can vote with them to break a tie.

With Biden in the White House and Democrats in control of the House, holding on to the Senate is the GOP’s only hope of blocking Biden’s agenda and a slew of Democratic-backed bills. Republican messaging is that a vote for incumbents Perdue and Loeffler is to “hold the line” and ensure Democrats won’t have “total control” of Washington. The slogan for Perdue’s bus tour: “Win Georgia, save America.”

In an astonishing $134 million in television ads that have run in Georgia since Nov. 4, $40.8 million worth of them have mentioned Biden, Schumer, Ocasio-Cortez or House Speaker Nancy Pelosi (D-San Francisco), according to a review of ads compiled by Advertising Analytics.

The ads, from Republicans or their allied groups, warn of the liberal policies they say Democrats will pass if granted control of the Senate, such as the Green New Deal, “Medicare for all” or adding seats to the Supreme Court.

Democrats, meanwhile, are hoping to keep the focus on Trump, trying to force Loeffler and Perdue to take sides in the state GOP’s internal battle over whether to acknowledge Biden’s victory or continue to appease Trump.

In a recent debate, Warnock goaded Loeffler to directly answer whether Trump had won the election, a question she dodged five times over the hour. She did say she backed Trump’s “right to use every legal recourse available.”

Republicans have backed Trump’s efforts to get the courts to block Biden’s election from being finalized, a point that Democrats hope will sully their rivals’ image among GOP voters who don’t support the president or his efforts to fight the election results.

Democrats have made oblique references to Trump in their ads, such as one depicting Perdue repeating many of the themes Trump said during the early days of the pandemic.

They say the independence of Georgia’s senators is going to be important to whether the Senate is able to accomplish things, like a new COVID-19 relief bill.

“These are our two United States senators, and who we select is going to be important in terms of Georgia’s future,” said Rep. Hank Johnson (D-Ga.).

But as challengers, the Democrats have also focused significant attention on trying to muddy Perdue and Loeffler amid allegations that they improperly used information received as part of their Senate jobs to sell stocks as the COVID-19 pandemic first came to the United States. Since early November, Democrats and allied groups have run about $27 million worth of ads against Loeffler and Perdue mentioning the stock sales, according to the ad data. Loeffler and Perdue have denied any wrongdoing.

Republicans are favored in the Jan. 5 runoffs, but the results are expected to be close. The GOP has long had an edge in Georgia, but Democrats are gaining. When Biden narrowly won the state, it was the first time since 1992 that a Democratic presidential candidate had done so.

National figures are visiting the state at a steady pace. Biden is scheduled to campaign there Tuesday for Warnock and Ossoff. Trump has held a rally for Loeffler and Perdue and Vice President Mike Pence plans his third trip for Thursday.

The lack of attention to local issues isn’t surprising. Senate races have increasingly become proxies for how voters feel about national politics.

The nationalization of Senate races became blindingly clear in 2016, when their outcomes aligned perfectly with those of the presidential race in each state that had a Senate contest. This year, Republican Sen. Susan Collins was the only senator who overcame that trend, winning in Maine when Trump couldn’t. It takes a strong personality and brand to overcome the dynamic, Taylor said.

Perdue, who has been in office for one term, and Loeffler, who was appointed to her seat one year ago, don’t have that decades-long brand.

Some say that control of the U.S. Senate — though not a local issue — will be just as important to Georgians as it will for all Americans.

“Although it has drawn national attention,” Johnson said, “this is still an election about Georgia.”