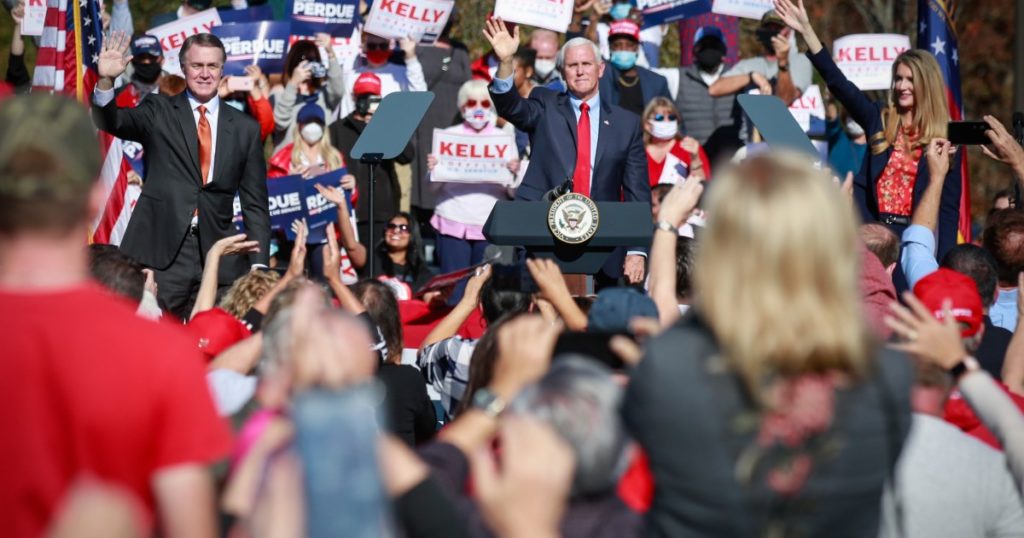 Linda Satterfield, a 72-year-old retired trucking company owner, cast her ballot this year for President Trump. As Georgia now faces twin runoff races that will determine whether Republicans retain control of the U.S. Senate, she is so angry about his defeat in her home state that she is questioning the point of voting.

“Trump won Georgia,” she insisted Friday after hearing Vice President Mike Pence campaign here for Republican Sens. David Perdue and Kelly Loeffler, both of whom were forced into runoff elections against Democratic rivals after falling short of the 50% threshold earlier this month. “How serious am I going to be about voting in January when our votes were pulled out from under us?”

On the same day, Georgia’s Republican-led government certified that President-elect Joe Biden won the state by 12,670 votes. Satterfield wasn’t alone in rejecting that finding: “Everybody I talk to is saying: ‘Why should we go vote?’ They stole the biggest election of this year from us. Why bother?”

With just over six weeks until the pivotal Senate special election Jan. 5 — a time when Georgia Republicans most need to be united — they instead are engulfed in bitter infighting. Trump’s supporters continue to question his loss, echoing his barrage of unsubstantiated claims of election fraud even as Republican state leaders reject them.

Georgia Secretary of State Brad Raffensperger, a Republican, has insisted there is no evidence of widespread electoral fraud or voting system problems. In turn, he has been assailed from within the party, though he has the tacit support of Gov. Brian Kemp, who certified Georgia’s results Friday while urging Raffensperger to address concerns about verifying signatures on ballot envelopes.

Perdue and Loeffler previously called on Raffensperger to step down. Rep. Doug Collins, a vocal Trump ally, has railed against Raffensperger’s “incompetence.” David Shafer, the chairman of the Georgia Republican Party, has raised questions about “serious election irregularities.”

Some Republicans fear the squabbling is not only distracting party voters from the Senate race, but undermining faith in the electoral process in a way that could dampen conservative turnout.

“I’m hearing from people already, ‘Why would I bother voting when the whole system is rigged?’” said Buzz Brockway, a former Republican state representative. “Now maybe that’s just the emotion of the moment,” he added with a nervous laugh. “But if that seeps in, then Republicans have a real problem.”

To be sure, Republicans typically vote in higher numbers than Democrats in Georgia runoff races, and they have a powerful incentive to turn out for this special election. If Democrats Jon Ossoff and the Rev. Raphael Warnock defeat Perdue and Loeffler, respectively, Republicans will no longer hold a Senate majority — and the power to block Biden’s agenda. Instead, Vice President-elect Kamala Harris would be the tie-breaker in a Senate split 50-50.

April Lyerly, a 52-year-old homemaker from Marietta, said her worry about fraud in some counties did not discourage her in the least from voting for the Republican senators.

“We have some really close races,” she said as she waited for Pence to speak in Canton. “I just think everybody needs to keep showing up.”

Jack Kingston, a former Republican congressman and Trump surrogate, said he was confident the feud over the presidential election result would not stop the state party from coming together to support Perdue and Loeffler.

“Right now, their number-one priority is this Senate race as a way to balance things in Washington,” Kingston said. “They’re saying, ‘Okay, do I want Bernie Sanders to be chairman of the budget committee? Do I want Elizabeth Warren to hold a gavel? And do I want Chuck Schumer really changing the entire world once they take Georgia?’”

Charles Bullock, a professor of political science at the University of Georgia, said that such thinking gives Republicans strong motivation to go to the polls, but in a very tight election the drop-off of just a few conservative voters could make the difference.

“If Republicans are more disheartened and Democrats are jubilant, that could certainly provide the margin that Jon Ossoff would need to get to 50%,” he said.

Beyond that, Bullock added, the feuding could cause problems for Kemp, who faces reelection in 2022 and wants to avoid a Trump-backed challenger in the party primaries.

Kemp has, for the most part, remained on the sidelines in the fight over the November election — even as Trump, demanding loyalty, has called him out. “Governor Kemp will hopefully see the light before it is too late,” Trump tweeted Tuesday, linking to a poll showing the governor’s approval rating slipping. “Must finally take charge!”

Eric Johnson, a Loeffler campaign advisor and former Republican leader of the Georgia Senate, said that while he was concerned that some Republicans believed their vote did not matter, “ultimately, I think they will come together once the Trump situation is over in Georgia.”

National Republicans have invested heavily in the Senate races. Karl Rove, former advisor to President George W. Bush, is spearheading a national fundraising campaign and Sens. Marco Rubio and Rick Scott of neighboring Florida and Tom Cotton of Arkansas have campaigned for Perdue and Loeffler.

Meanwhile, many local Republican leaders spent the past week preoccupied with the presidential result as election officials in 159 counties conducted a manual recount of 5 million paper ballots.

“Still reeling at how this election was so adamantly declared to have been ‘free from irregularity’ before votes were counted, machines audited or returns certified,” Shafer, the state party chairman, tweeted last week. Asked about his party’s unity and strategy for the Senate races, Shafer offered a brief statement.

“We are all under enormous pressure and tensions are high,” he said in a text. “But in the end, the consequences for America are too great for us not to come back together for the runoff elections.”

After the state concluded its massive hand count, Raffensperger said he was disappointed “our candidate” — Trump — didn’t carry Georgia. But, he added, the audit confirmed that the state’s new voting system accurately counted and reported votes.

“Working as an engineer throughout my life, I live by the motto that numbers don’t lie,” he said at a news conference at the Georgia Capitol. “The numbers reflect the verdict of the people.”

Trump’s campaign showed no sign of accepting the outcome.

Also on Saturday, Loeffler’s campaign disclosed that she was quarantining after testing positive Friday for the coronavirus, preventing her from campaigning in person for a time.

Some Republicans fear Trump’s claims of election fraud could backfire on the party.

Erick Erickson, a conservative radio talk-show host based in Georgia, said on his show last week that he was “really, really, really worried” by emails from Georgia Republicans telling him they were giving up on the Senate runoffs because they believe the presidential election was fraudulent.

Debbie Dooley, a Trump supporter and co-founder of the tea party movement in Georgia, dismissed the idea that Republicans should accept Trump’s loss in Georgia and focus on the Senate races. The two fights, she argued, were inextricably linked.

“These Republicans that are saying ‘Now we need to focus on the Senate race,’ they have their heads buried in the sand,” she said. “Part of the reason we’re doing this is to protect the Senate race runoff and prevent the same thing from happening again.”

Dooley said she did not trust Raffensperger and had no doubt there was widescale fraud, even if she could not point to examples.

If Trump ultimately does not prevail, she said, the nearly 74 million Americans who voted for him would not stand down.

“We will give Joe Biden and the left a taste of their own medicine,” she said. “We’re going to resist. There will be no unity in this country.”

That sort of tone is just what worries Republicans such as Brockway, the former state representative.

“I think that’s where the danger comes in for the runoff — the assumption that the results are fraudulent,” he said. “It seems like the conclusion has been arrived at before evidence has been uncovered.”