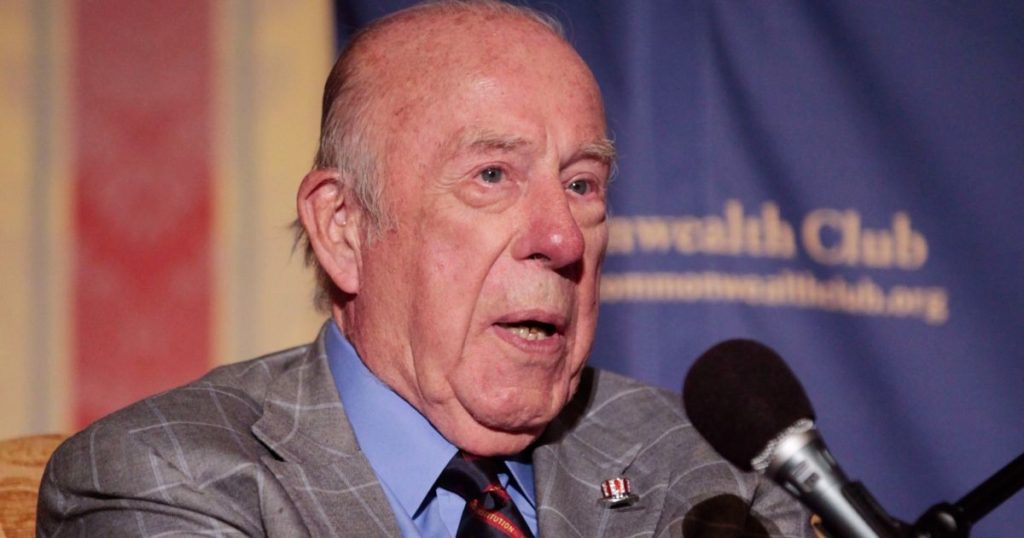 George P. Shultz, who as secretary of State in the 1980s shaped U.S. foreign policy in the closing phase of the Cold War when a dangerous nuclear-armed stalemate gave way to peaceful — if not quite cordial — relations between the superpowers, died Saturday. He was 100.

Shultz’s tenure as President Reagan’s chief diplomat, from 1982-89, came after he served in three Cabinet-level posts in the Nixon administration: Treasury secretary, director of Management and Budget, and Labor secretary.

Shultz died at his home on the Stanford campus, said Jeff Marschner, director of media relations at Stanford’s Hoover Institution, on Sunday.

Shultz spent his later years in the Bay Area as a Republican Party elder statesman, teaching economics at Stanford University. He was one of the nation’s most prominent advocates of reducing the risks of nuclear war.

Shultz was also outspoken on climate change. In a break with the Trump administration, he joined another former secretary of State, James A. Baker, in calling for a carbon tax on oil, natural gas and coal to discourage the burning of fossil fuels.

An economic advisor to former Gov. Arnold Schwarzenegger, Shultz was one of the many Republican establishment figures who resisted Donald Trump’s rise to the presidency.

In keeping with the diplomatic demeanor of a former secretary of State, he avoided direct criticism of Trump, but a burst of candor a few months before the 2016 election made his opinion of the future president clear: “God help us,” he told reporters.

Shultz prided himself on his integrity, emerging unscathed when the Watergate scandal consumed Richard M. Nixon’s presidency. As Treasury secretary, Shultz rejected a White House request to audit the tax returns of Nixon enemies, leading the president to ask his counsel John Dean, “What does that candy ass think I sent him over there for?”

Shultz had little stomach for the self-promotion that made some other secretaries of State more famous. His achievements in foreign policy, especially with the Soviet Union and U.S. allies in Europe, were little recognized during his tenure.

When Shultz replaced Secretary of State Alexander M. Haig Jr. in 1982, Washington’s relations with Moscow were as frosty as they had been in a generation. Former Secretary of State Henry A. Kissinger’s signature “détente” policy was dead, following the Soviet invasion of Afghanistan and former President Carter’s vehement response: economic sanctions and a boycott of the 1980 Summer Olympics in Moscow.

The relationship, strained by Reagan’s staunch anti-Communism, deteriorated further when Soviet-dominated Poland imposed martial law to crush a popular uprising. Washington’s ties with its traditional European allies were also hurt when the sanctions interfered with plans for a Soviet pipeline to supply natural gas to Western Europe.

When Reagan and Shultz left office in January 1989, relations with Moscow were warmer, and the friction with Western Europe was all but forgotten.

The ascent of Mikhail S. Gorbachev to the top post in Moscow in 1985 played a key role in the change. But Reagan, encouraged by Shultz, cleared the way for Gorbachev’s conciliatory policy by toning down the anti-Communist rhetoric and resuming arms control talks.

The high point came in 1987 when Reagan and Gorbachev signed a treaty banning all intermediate-range nuclear missiles from Europe, the first time in the long superpower rivalry that an entire class of weapons was prohibited.

It was not until George H.W. Bush succeeded Reagan in the White House, and James A. Baker III replaced Shultz at the State Department, that the Soviet Union finally collapsed, ending the last vestiges of the Cold War in a victory for the West. But the die was cast during Shultz’s tenure at the State Department.

Shultz’s approach to the Soviet Union was pragmatic. He advocated a policy of engagement because he believed it would advance U.S. interests. Reagan endorsed the policy for the same reason. Right-wing ideologues, who populated much of the Reagan administration’s upper ranks, never fully trusted Shultz and consistently resisted his policies. But Reagan usually backed him.

“Shultz’s great achievement as Secretary of State was that he developed and refined, and thereby assured the success of, Ronald Reagan’s basic foreign policy,” Robert W. Tucker, a professor emeritus at the School of Advanced International Studies of Johns Hopkins University, wrote in the journal Foreign Policy.

Tucker argued that Shultz, virtually alone among Reagan’s top officials, perceived early on that historical trends were favorable to the United States and must be encouraged.

“Dealt a good hand, he played it well,” Tucker said.

Shultz was a stolid, outwardly unemotional man whose politics were, in fact, staunchly conservative. Moreover, he emerged as the most outspoken hawk in an administration that prized toughness, advocating the use of military power to back U.S. diplomacy in situations that even the Pentagon tried to avoid. He called for a show of force after the 1983 bombing of the U.S. Marine barracks in Lebanon, which killed 241 servicemen, but Reagan rejected the idea.

“Power and diplomacy must always go together or we will accomplish very little in the world,” Shultz often insisted. He was scornful of what he saw as the Defense Department’s timid approach to counterterrorism.

In his 1993 memoir, “Turmoil and Triumph: My Years as Secretary of State,” Shultz observed wryly: “To Weinberger, as I heard him, our forces were to be constantly built up but not used.”

Shultz’s record was mixed in the Middle East and Central America.

He devoted much of his time to resolving the Arab-Israeli conflict, but to no avail.

During his last week in office, he agreed to direct talks with the Palestine Liberation Organization, a break with longtime policy banning diplomatic contacts with what the U.S. and Israel deemed a terrorist organization.

Shultz’s recognition of the PLO cleared the way for the establishment of the Palestinian Authority in the West Bank and Gaza Strip and for a series of direct peace talks between Israel and the Palestinians.

In Central America, the Reagan administration — with Shultz’s full backing — sought to oust the Communist-aligned government of Nicaragua. Washington supported an anti-Communist rebel group, the Contras. The White House National Security Council sought to bolster the rebels by secretly selling arms to Iran in exchange for the release of U.S. hostages in the Middle East, then funneling the money to the Contras. When the apparently illegal scheme came to light in 1986, the scandal put Reagan’s presidency in jeopardy.

Shultz emerged from Iran-Contra unscathed because, as he told congressional investigators, he was not informed of the plan — and strongly objected when he did find out about it.

George Pratt Shultz was born in New York on Dec. 13, 1920. He grew up in the affluent suburb of Englewood, N.J. In 1942 he graduated from Princeton University, where he played varsity football and basketball. He later enlisted in the Marine Corps, serving in the Pacific for the rest of World War II.

While on leave from the war, in Hawaii Shultz met Helena Marie (Obie) O’Brien, an Army nurse whom he married in 1946. They had five children.

In 1949, Shultz earned a doctorate in industrial economics from the Massachusetts Institute of Technology, where he taught until 1957. He served on the staff of President Eisenhower’s Council of Economic Advisers and later joined the faculty of the University of Chicago graduate school of business. He became the dean there in 1962.

As an academic, Shultz specialized in industrial relations, often serving as mediator between management and unions, sharpening his skills as a negotiator.

As Nixon’s Labor secretary, Shultz pressured Philadelphia-area construction unions, at the time all white, to accept minority members as a condition of getting government work. It was one of the first uses of racial quotas in federal hiring.

In 1970, Shultz ordered an investigation of the killing of Joseph A. (Jock) Yablonski, an insurgent candidate for president of the United Mine Workers Union. The probe led to the downfall of union President Tony Boyle.

Nixon later tapped Shultz to lead the Office of Management and Budget, where his deputy was Weinberger.

Shultz was a key player in Nixon’s effort to combat raging inflation. The administration imposed a 90-day freeze on wages and prices, ended the gold standard for U.S. currency, put a 10% surcharge on imports and cut the federal budget. Shultz had reservations about parts of the program but went along with it.

In 1972, Nixon appointed Shultz Treasury secretary. Inflation rose after the end of the wage-price freeze. Nixon wound up imposing an additional 60-day freeze. Shultz later told the Washington Post that he planned to resign over the second freeze, but waited nearly a year before announcing his departure for “personal reasons.” By that time, Watergate had ravaged the administration. Nixon resigned a few months later.

For decades, Shultz split his time between his house on the Stanford campus and his apartment in San Francisco. His first wife died in 1995, and two years later, Shultz married Charlotte Mailliard Swig, a prominent San Francisco socialite.

In retirement, Shultz remained active both in academia and politics. In 2003, he was co-chair, with Warren Buffett, of the California Economic Recovery Council, an advisory group to Schwarzenegger’s gubernatorial campaign.

More recently, he focused on campaigns to cut nuclear weapon stockpiles, fight global warming and decriminalize possession of drugs for personal use to encourage treatment over incarceration.