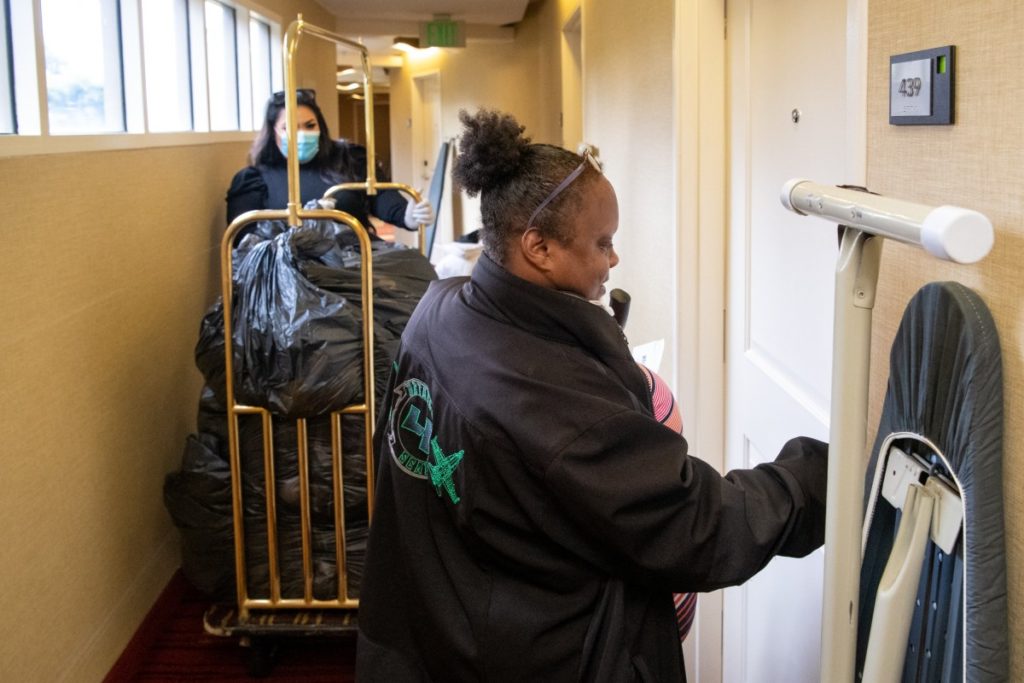 (Note: Even as SBLA posts, U.S. District Judge David Carter is holding a hearing in Skid Row about the homeless crisis. You can follow the hearing through live tweets from reporters Kate Cagle, Matt Tinoco, Benjamin Oreskes, Meghann Cuniff, and more.)

What would you do if you had unlimited funds to run a program to provide housing to the unhoused during the pandemic?

Last week, when the Biden administration announced that it would fully reimburse cities for efforts to provide shelter for people experiencing homelessness during the pandemic, city officials were faced with that question. The most progressive members of the L.A. City Council, Mike Bonin, Marqueece Harris-Dawson, and Nithya Raman responded that day, asking the city to quickly and dramatically expand the Project Roomkey program where hotel rooms are repurposed to provide 90 days of shelter for people living in the streets or in their cars. While living at the hotels, participants in Roomkey have access to meals, healthcare and other social services to help them find and qualify for permanent housing.

Eight days later, Eric Garcetti announced that the city would seek to do just that. Last evening, Alissa Walker reported that both the City of Los Angeles and Los Angeles County would seek to quickly bring in hundreds more participants to Project Roomkey.

While any move that brings even one unsheltered person indoors is good news, the announcement was certainly less dramatic than when Garcetti and the County Supervisors pledged to bring 15,000 indoors via Project Roomkey in L.A. County. Even at its peak, the county was serving fewer than 5,000 people. According to Project Roomkey Tracker, that number had fallen to less than 3,000 people as of yesterday. Less than two months into the program, Garcetti had seemingly abandoned the goal of reaching 15,000 and shrugged off that number as “aspirational.”

Over the weekend, federal judge David Carter, who has been overseeing efforts to alleviate homelessness in Southern California, visited Skid Row in Los Angeles. Today, Carter is holding a hearing with advocates and city and county leaders about the living conditions of L.A. County’s unhoused population. Yesterday, Bonin called for the city to enter into a consent decree, similar to the one in place in Orange County, which would provide greater accountability for the handling of the homelessness crisis.

There are many reasons that the program failed to reach the stated goal in Los Angeles County, many of which should be avoidable if the funding truly is unlimited. The problem has not been finding people to occupy rooms. As Raman noted last week, “Over 90 percent of beds in L.A. County were filled quickly, far outpacing the rest of the state. And many qualified participants in L.A. were never offered a room.” The problem has been finding rooms to be occupied.

As Streetsblog reported in June, Roomkey got off to a slow start and faced an uphill battle against the same political forces that oppose shelters, bridge housing, and permanent supportive housing structures. And while it’s true that some proposed bridge housing sites were nixed, the problem finding rooms was bigger than a few NIMBY groups.

First, the city and county focused on hotels that had more than 100 available rooms leaving hundreds of smaller hotels out of the program. Given the urgency of the moment last spring, such a decision made sense as program staffing was short and larger hotels offered more rooms to house more individuals. But with FEMA’s guarantee of funding, as opposed to the one-time 75 percent reimbursement offered by the previous administration, the county needs to open up the program to as many hotels as it can.

However, just opening up hotels that qualify for the program may not be enough. Starting last spring, advocates called on Garcetti to use emergency powers granted during the pandemic to seize underutilized hotel rooms to be part of the program. As reported in KNOCK.LA:

At least 4,923 hotel rooms in downtown are part of luxury projects that have benefited from public money or land, while there are 3,884 “sheltered and unsheltered homeless people” within Skid Row and the adjoining neighborhood of Little Tokyo. Skid Row is 72 percent Black.

Researchers have joined advocates in noting that hotels are an underutilized resource in combating the rising tide of homelessness, regardless of the added crisis of the pandemic. In “Hotel California: Housing the Crisis,” writer and organizer Jonny Coleman, UCLA professor of law (emeritus) Gary Blasi Esq., and UCLA professor of urban planning and inaugural director of the UCLA Luskin Institute on Inequality and Democracy Ananya Roy examined the homelessness crisis from several angles. They agreed that the city must continue to negotiate to bring more hotels into Project Roomkey, but also recommended it use the full set of tools in its arsenal in order to make substantive progress:

In Los Angeles, eminent domain has historically been used to clear neighborhoods and make way for urban development. We argue that the time has come to flip the script of eminent domain and to use it for the self-evident public purpose of housing.

There have been three roadblocks in the way of Roomkey becoming the game-changing program that was hoped for last spring: funding, program strategies, and political will. With funding taken care of, and federal intervention looming, it’s now up to our leaders to show the competence and resolve needed for Roomkey to finally meet its goals.