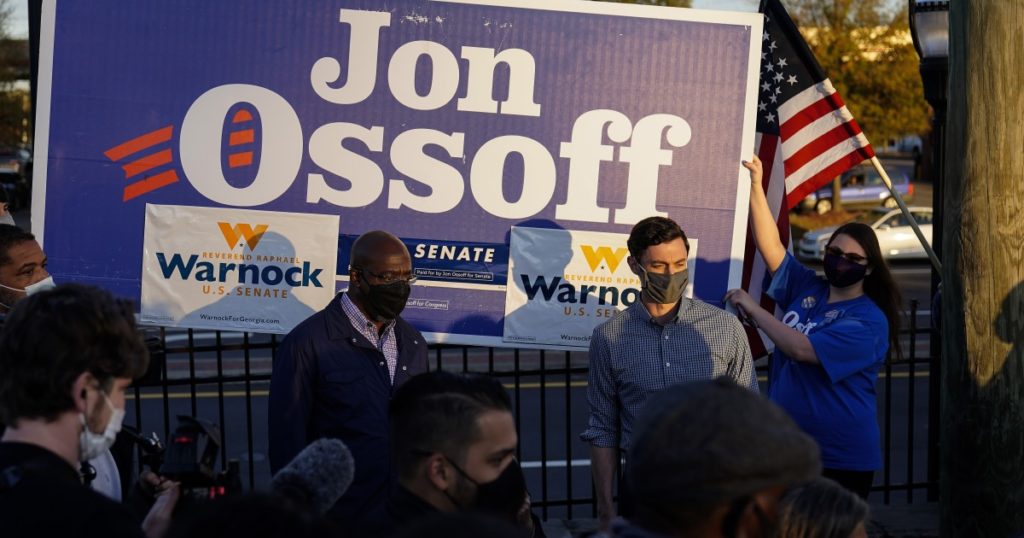 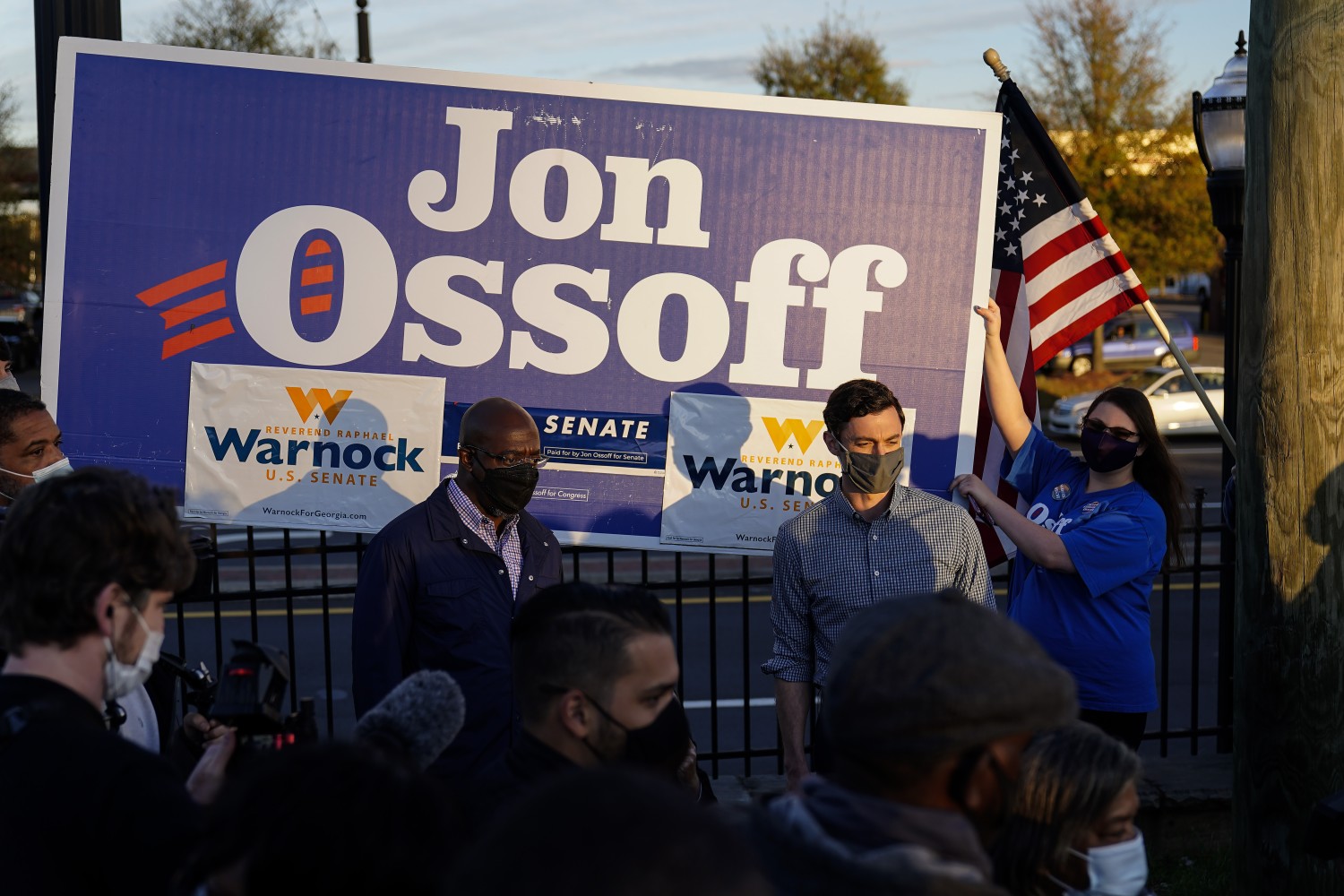 Democrats are poised to take control of the Senate with the surprise victory of Raphael Warnock and the expected win by Jon Ossoff in the Georgia runoff races, giving the party an opportunity to advance President-elect Joe Biden’s agenda and appointees through Congress with a fragile margin that will leave no room for error.

Upon the inauguration of Biden on Jan. 20, assuming Ossoff’s election is confirmed, Democrats will control the Senate with an exceedingly rare 50-50 split that has Vice President-elect Kamala Harris as the decisive tiebreaker.

A 50-50 split has only happened three times in American history, each time raising some questions for the two parties about how exactly it would work. Senate Majority Leader Mitch McConnell (R-Ky.) and Senate aides of both parties have previously pointed to the most recent case of an even split — which lasted five months in 2001, at the start of George W. Bush’s presidency — as the likely precedent: Like Republicans did back then, Democrats will control the chamber as well as the committees because of the tiebreaking power of the vice president.

Although challenges loom, the Democrats’ wins will make it significantly easier for Biden to advance his agenda. Instead of McConnell making decisions on what nominations or bills go to the floor — and being all but certain to block a number of them, judging by his record under President Obama — those calls will rest with Democratic Sen. Charles E. Schumer of New York.

Schumer, who would become the Senate majority leader, called it a “brand new day,” not waiting for official confirmation of Ossoff’s victory.

“For too long, much-needed help has been stalled or diluted by a Republican-led Senate and President Trump. That will change with a Democratic Senate, Democratic House and a Democratic president,” he said in a statement Wednesday morning.

In a news conference, he declined to outline an agenda for the new majority, but said that a $2,000 stimulus check would be an early priority.

The 50-50 split will leave Democrats with immediate challenges: Assuming they have no Republican votes for some bill or Biden nominee, every Democrat will have to vote together on questions that require 51 votes, such as confirmations to the courts or administration jobs. Harris will have to be available to break every tie. Opposition from a single Democrat, or an illness that keeps a senator away, could mean failure.

Also, Democrats would still need support from at least 10 Republicans on much legislation so long as the filibuster, which requires at least 60 votes to overcome, remains available for Republicans to try to obstruct measures. With the new majority, Democrats are certain to face heightened pressure from progressives to repeal the filibuster rule, although that faces long odds with several moderate Democratic senators in opposition.

That pressure became clear even before Ossoff’s election was official. Schumer dodged when pressed on whether Democrats would eliminate the filibuster, saying the party is “united in wanting big, bold change, and we’re going to sit down as a caucus and discuss the best ways to get that done.”

Rep. Pramila Jayapal of Washington state, who leads a group of progressives, was already promising major policies. The Georgia result, she said, “means that Congress can finally act to pass bold climate legislation that creates jobs, saves our planet and helps frontline communities.”

The reality of theoretical control of the Washington trifecta — the White House, House and Senate — will pose an immediate expectations problem for Democrats. Besides the razor-thin Senate majority, Pelosi is working with a historically small margin in that chamber as well, with only a few Democratic votes for wiggle room.

“In a 50-50 Senate where Democrats have notional control of the chamber, there is a risk — and I don’t know how this is managed — of expectations getting way far ahead of what is doable in a divided Senate,” said Rohit Kumar, a principal at PwC and a former deputy chief of staff to McConnell.

Progressives’ ambitious agenda items, including “Medicare for all,” the Green New Deal and statehood for the District of Columbia, are likely moot, given opposition among some Democrats — including Biden on the first two proposals — unless the Senate filibuster is removed. Any legislation would involve compromise with Republicans.

Senate control will be particularly powerful if there are any vacancies on the Supreme Court. Presidential nominees only require 51 votes after McConnell and the Republicans did away with the filibuster for high court appointments in 2017, to confirm Trump’s nominees. Other judicial appointments could be approved with the same margin.

Democrats would have one or perhaps two shots this year at approving major legislation through a special budget procedure called reconciliation, which is not subject to the filibuster. The process could be used to craft narrow legislation, such as modifications to the Affordable Care Act, the Medicare eligibility age, immigration or climate policy.

Because of the slim margin, every vote will be critical. Centrists such as Democratic Sens. Joe Manchin of West Virginia and Kyrsten Sinema and Mark Kelly of Arizona and Republicans Susan Collins of Maine and Lisa Murkowski of Alaska will become more powerful, and courted, because their votes will be needed. Manchin, the most conservative Democrat, was a trending topic on Twitter on Tuesday evening in light of his newfound popularity.

It is unclear whether the bipartisan 2001 agreement on how to operate a 50-50 Senate would be approved again. The test would come as soon as the newly formed Senate begins and needs to approve its rules. Schumer and McConnell had not yet spoken as of midday Wednesday.

The deal could be hammered out again, said former Sen. Trent Lott, the Republican majority leader at the time who cut the agreement with then-Sen. Tom Daschle, who was the top Democrat. But Lott warned that the Senate of 2021 is far more partisan than that of even 20 years ago.

“My concern is, I don’t think McConnell and Schumer have the kind of relationship that Tom and I had,” he said in an interview before the election. “Tom and I would have never called each other names or questioned each other’s integrity on the floor of the Senate. We just wouldn’t do that. The Senate was more congenial back in those days than you have now.”

“I think they’ll get it worked out just by necessity,” said former Sen. Don Nickles of Oklahoma, who also was in the Republican leadership in 2001. “They need to pay [staff] and hire people and you don’t get started until” the rules are approved.

Democrats would be motivated to get the Senate going so that Biden’s appointees can be confirmed, Nickles added. “And Republicans will want to be treated fairly.”

In 2001, the 50-50 Senate lasted only five months until a Republican, Vermont Sen. Jim Jeffords, switched parties to become an independent who caucused with Democrats, handing them the majority.

But, as Lott pointed out, even the 50-50 Senate proved to be productive. That year the bipartisan No Child Left Behind education policy became law, as did President Bush’s tax cuts.