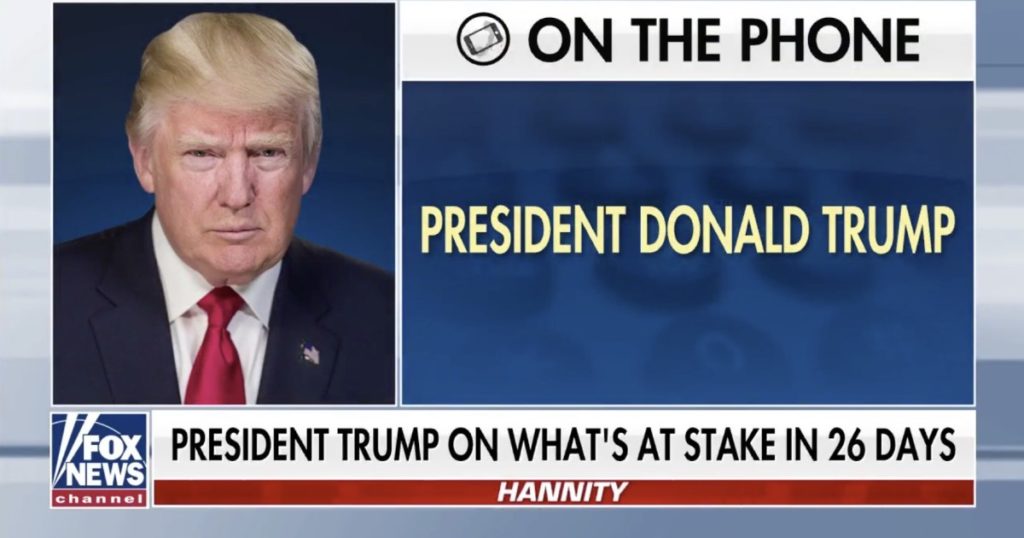 On Feb. 10, Fox News was in lockstep with other cable news channels and major broadcast networks in presenting more than four hours of the second impeachment trial of Donald Trump.

But at 5 p.m. Eastern, Fox News pulled away from the most graphic video evidence of violence during the insurrection by pro-Trump rioters at the Capitol on Jan. 6 and switched to its popular daily roundtable show “The Five.”

Most of the panelists dismissed the Democratic impeachment managers’ presentation, defended the former president and moved on to other topics — including the viral Zoom cat lawyer video — despite the historic nature of the events in Washington. Viewers who wanted Fox News journalists’ take on the proceedings had to wait until anchor Bret Baier showed up at the top of the 6 p.m. hour.

The editorial judgment to cut away was met with derision on social media, where the conservative-leaning news network is often hammered by critics. On screen, Juan Williams, the lone liberal on “The Five,” angrily chastised his co-hosts for ignoring the evidence presented.

What played out that day demonstrates the pressure Fox News is under, as the network faces growing scrutiny over its role in supporting Trump and his disinformation claims that many believe helped to fuel the deadly insurrection attempt in the Capitol.

The profit engine of Rupert Murdoch’s Fox Corp. presents itself as a news network, but it’s often defined by its opinion hosts, such as Sean Hannity, who pay fealty to Trump and the former president’s devoted followers.

Those followers now have multiple options to feed their fix for right-wing opinions — some of them far more extreme than what is delivered on Fox News. Satisfying those viewers while also reporting information that does not fit their worldview has become a challenge for an organization that faces vocal detractors on the political center and left, a potentially expensive lawsuit from one of Trump’s baseless voter fraud targets and an increasingly outsize role in the parent company’s financial performance.

“I have friends who don’t watch Fox anymore because they see it as untethered from reality,” said Richard Goodstein, a Washington attorney who has appeared on the channel as a liberal guest. “The question for Fox is balancing losing viewers like that to losing viewers who switch channels rather than watching someone like me who forcefully brings facts and opinions that they cannot tolerate.”

Chris Stirewalt, the former political editor for Fox News, said in an op-ed column for The Times that he faced anger from the Trump multitudes after defending the network’s election night call of the once reliably red Arizona for Joe Biden.

“When I defended the call for Biden in the Arizona election, I became a target of murderous rage from consumers who were furious at not having their views confirmed,” he wrote.

Giving the benefit of the doubt and often full-throated support to a president whose lies led to an attempt to overturn an election in turn led to voting software maker Smartmatic’s $2.7-billion defamation lawsuit against the network and three of its hosts.

The suit filed Feb. 4 alleges that Fox News and its hosts Maria Bartiromo, Lou Dobbs and Jeanine Pirro damaged Smartmatic’s reputation and business by spreading Trump’s conspiracy theories about the election being rigged to elect President Biden. (Fox News and the hosts have filed motions to dismiss the suit, saying the Trump’s claims were newsworthy, even if they were false.)

A more immediate question hanging over Fox News is the same one the Republican party is grappling with: What is the next move for Trump? Just as Republican legislators fear Trump will support primary challengers back home if they take him to task, Fox News has to determine how to navigate his expected re-emergence following his acquittal in the second impeachment trial.

“That’s the only thing that’s going to satiate the folks who turn on Fox,” Walsh said. “Right now they are going on about big tech censorship and immigration. That’s not going to be enough.”

The challenges come as Fox News has emerged as the most significant piece of Fox Corp., which slimmed down after selling most of its entertainment assets to the Walt Disney Co. for $71 billion. During the current fiscal year, Fox News is expected to contribute 80% — or more than $2 billion — to Fox Corp.’s earnings before interest, taxes, depreciation and amortization, an industry-wide measurement of profitability.

Fox News has been the most-watched cable news channel for 19 consecutive years, thanks to its effective positioning as a right-leaning alternative to other TV news outlets. As the rest of the traditional TV business declined in 2020, the channel’s audience grew. Fox News became the most-watched network in all of cable TV, according to Nielsen.

The network expected an audience falloff once Trump lost the White House, as it had seen viewers tune out after Barack Obama, a Democrat, defeated his Republican opponents in 2008 and 2012.

But Trump remained the main story in the weeks after the 2020 election with his unfounded charges of voter fraud, leading to the insurrection at the Capitol by pro-Trump rioters that killed five people, followed by the second impeachment trial. Depressed Trump supporters tuned out of Fox News during coverage of those events, while the ratings for MSNBC and CNN surged as viewers who don’t habitually watch cable news were tuning in.

Fox News has managed to ride out ratings fluctuations in the past, but it took longer this time. The network has ranked first in viewers since Biden’s inauguration, although it still trails CNN in the 25 to 54 age group important to advertisers.

Scott took over the operation in 2018 after it had been rocked by sexual harassment scandals and racial discrimination lawsuits related to the reign of the network’s founding chief executive, Roger Ailes. After maintaining the network’s ratings leadership for two years, she is now jiggering the network’s lineup and will add at least two more hours of right-leaning opinion programs, which have always been the most reliable ratings performers.

Murdoch also tried to counter the notion that Fox News has veered too far to one end of the political spectrum.

“We don’t need to go further right,” Murdoch said. “We’ll stick where we are, and we think that’s exactly right and that’s the best thing for the business and for our viewers.”

Despite the younger Murdoch’s assurances, there is a sense among some politicos and people inside Fox News that the network has already moved further right to stave off the insurgence of new outlets that are courting their audience. Even veterans of past Republican administrations, such as Matthew Dowd, who worked for George W. Bush, believe there has been a shift.

“We saw them as conservative and more likely to be more friendly than others, but we never saw them as like, ‘Oh, let’s do Fox because they’re basically a propaganda arm,’” Dowd said. “You always thought of it as a conservative outlet, but it was rational conservative.”

A Fox News insider not authorized to speak publicly on the matter said the conservative bent of the network is reflective of where the Republican Party has gone under Trump.

This past year, Fox News saw the rise of a pesky new rival in Newsmax, which kept up a steadfast defense of Trump’s voter fraud claims through President Biden’s inauguration. Last fall, the Boca Raton, Fla.-based channel averaged as many as 1 million viewers at 7 p.m. Eastern on some days with host Greg Kelly, who on Trump’s last day in office said, “I miss him already.”

Newsmax’s ratings have faded in recent weeks. Since the inauguration it has averaged 226,000 viewers compared with 2.5 million for Fox News.

The other right-wing Fox wannabe is the more strident San Diego-based One America News Network, which does not have enough distribution in cable and satellite homes to be measured by Nielsen.

But the new breed of conservative outlets know how to attract attention. After Fox News Media canceled Dobbs’ Fox Business Network program — where many of Trump’s election fraud falsehoods were promoted — OAN founder Robert Herring asked in a tweet for the host to give him a call. “We may have a position available for you in which you wouldn’t be censored for speaking the truth!” Herring wrote.

Dobbs remains under contract to Fox News and still gets an annual salary in the seven figures.

One America News would like @LouDobbs to get in contact with us. We may have a position available for you in which you wouldn’t be censored for speaking the truth! #OANN

Neither of the upstart channels has the financial resources or infrastructure to knock Fox News off its perch. Nevertheless, Fox News is entering an era where a multitude of new contenders will try to nibble away at the conservative audience it once had to itself.

In addition to watching on cable, viewers can stream Newsmax and OAN without a pay TV subscription. There are also more digital conservative channels such as the First, which carries a nightly show from former Fox News host Bill O’Reilly, and Glenn Beck’s Blaze Live. Both are available on free ad-supported streaming services such as Pluto.

“Ten years ago conservative audiences were not that digitally savvy,” Klein said. “The early adopters of digital media were younger, more liberal, educated, et cetera. None of this digital technology is a mystery anymore to the older white males who watch Fox News and certainly not a mystery to the alt-right young men they want.”

Fox News does have an internal image problem resulting from the Arizona election call, which it stood by, despite an angry response from the Trump campaign and his supporters.

Stirewalt was fired from Fox News in a company restructuring on Jan. 19. Bill Sammon, the longtime executive in charge of the Washington bureau, which has long fought to remain independent from the network’s opinion side, announced his retirement a day earlier.

Both moves were seen as responses to their roles on election night, leaving some of the journalists at the company stunned and concerned that the network is lessening its commitment to straight news.

Rupert Murdoch recently told the Washington Post that Stirewalt’s exit was not related to the Arizona call. It was known among Fox News executives that Murdoch was not a fan of Stirewalt, who declined comment.

Even the perception that Fox News ousted journalists over reporting an election result that was ultimately accurate could damage one of the foundational constructs of the channel. The integrity of the Fox News polling unit and the precision accuracy of its election decision desk has helped define the divide between news and opinion.

But keeping the core conservative Fox News viewer happy is the company’s primary goal. Rupert Murdoch’s U.S. newspapers the Wall Street Journal and the New York Post have been highly critical of Trump’s actions on their editorial pages since he lost the election. Any personal political convictions he has on the matter are not worth alienating fickle TV viewers who could ultimately have an impact on the company’s balance sheet.

“They are not sentimental about their programming decisions,” Klein said of the Murdochs. “They do what they need to do to get an audience.”