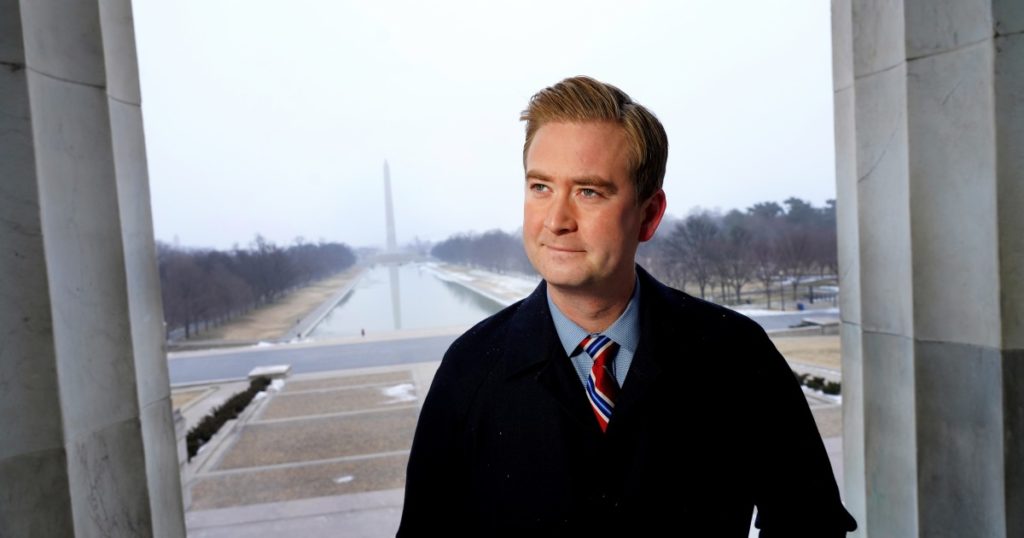 Whenever President Biden leaves a stage or lectern after an appearance in front of the media, the last voice viewers hear usually belongs to Fox News White House correspondent Peter Doocy.

In a post-Trump age when reporters are no longer dealing with a tsunami of misinformation or general hostility toward their trade, Doocy has emerged as an old-school, combative correspondent, peppering White House Press Secretary Jen Psaki — and occasionally Biden — with queries on how the president’s policies differ from promises made on the campaign trail.

President Biden has taken notice, and not in the hostile way journalists experienced when covering Donald Trump, who was more accessible but often contentious when dealing with the White House press corp.

“I know he always asks me tough questions, and he always has an edge to them, but I like him anyway,” Biden said before calling on Doocy at a recent briefing.

The president has ribbed Doocy as well, once suggesting to him that he could be White House press secretary. When Doocy asked Biden what he talked about on his first phone call with Russian President Vladimir Putin, the president shot back, “You. He sends his best.”

But Doocy has a thick skin, perhaps the result of having grown up in a Fox News family. He is the son of Steve Doocy, longtime co-host of the at times irreverent morning program “Fox & Friends,” which caters to the conservative followers of the network and is often a target of the network’s detractors. Trump regularly called in to the show for years, laying the groundwork for his political career.

Unlike his father, the younger Doocy, 33, has taken a straight-news path since joining the network in 2009, after graduating from Villanova University. He covered Washington and then tracked the Democratic candidates during the 2020 presidential campaign.

Doocy steers clear of the politically charged skirmishes that keep Fox News high on the radar of media critics.

As the Times recently reported, the network has been under fire in recent months as some of its hosts have spread Trump’s disinformation about the 2020 election being rigged to favor Biden, leading to a defamation suit. Fox News also faced blowback from Trump supporters over calling Arizona for Biden on election night, which has been linked to a shakeup in the network’s political unit.

Through it all, Doocy has managed to build a reputation as an aggressive questioner of Biden during his 2020 run for the White House, often shouting as the traditional reporter scrums were prohibited to ensure social distancing. He’s kept it up since being named White House correspondent on Jan. 13.

“He’s bringing that tenacity to the White House and making news almost every day with his questioning,” said Bret Baier, anchor of “Special Report,” the nightly newscast where Doocy frequently appears.

Doocy recently talked with The Times from Washington about his new role.

How did you develop the skill for getting your questions out on the fly?

The way that it came about in the gaggles was just recognizing that our time with Biden was going to be really short most of the time. He might be in transit, he might be moving from an exit to a building to a bus. And we might have 10 seconds. So the question has to be really short; it has to be something that is going to get attention. I would go over it on the campaign trail a lot with my producer, Pat Ward, and we would figure out what the most interesting topic was to us, and then really just pare down a question and get it out.

How is your batting average in terms of getting Biden to answer you in those situations?

It’s been pretty good. If we are in a position to have him hear us. I would say that we’re batting over .500.

Did it surprise you when Biden said publicly that he liked you?

It did not surprise me. But the way that he framed it was what a reporter would want to hear, right? He knows that it’s going to be a hard question with an edge, but “I like him anyway.” And that means he is up for the hard questions, and it sounds like he’s going to keep taking them. So more than a surprise, it kind of just made me hopeful that that will continue over the next couple years. There are so few opportunities to be in the room with him, but it sounds like when we are, he’ll be listening for us.

You’ve observed Biden every day really for almost a year now. Does anything feel different about him to you now that he’s president?

He does seem very comfortable over there. We’re able now at the White House to get a lot closer to him than we did at a lot of the campaign events in Delaware. In Wilmington, they took over a big theater downtown, the Queen Theater. And they got a couple months’ worth of lease at this place, and they wired it so that he would be on a stage and the reporters would be socially distanced where the seats would normally be in this theater. It was always like you’re seeing something at a theater, and there’s somebody on stage. It was more impersonal just because of the distance and the way that things were set up.

Now when you see him, it’s the thing that he’s wanted to do for his entire life, and that includes several decades in Washington already. And it does seem like he is very comfortable in the role, in a way that maybe we didn’t see as much during the transition.

Commentators on Fox News pounded away at President Biden over the last year during the campaign, and it continues now. Does it make your job more difficult in dealing with the White House?

It really hasn’t had that much of an impact at all. As you’ve seen, the president will still take the questions. The press secretary will still call on Fox whenever we’re in the briefing room. The only time that we ever don’t get called on are the days that we just don’t physically have a seat in the briefing room because they have this social-distancing rotation. So two days out of the week we are not in there. But on those days the staff has been perfectly responsive over email or if we can get them in person.

Does it concern you that there are times there are views or theories that contradict the factual reporting that’s presented on the network? Does it make your job as a journalist more challenging?

Personally, do you see anything on the network that makes you wince sometimes and say, “I wish they wouldn’t do that.”

I have just been trying to do my own thing and focus on my 90 seconds. I don’t see everything. As I learn in this role, I’m trying to put out a good product for 90 seconds every hour or two, depending on what’s going on.

The cable news audience has become more politically polarized, and the opinion hosts get a lot more attention. Do you worry the kind of straight news reporting you do is getting overshadowed?

From my perspective, the straight news is getting more attention than ever. The new information we’re getting from the new administration is getting more attention than anything else that I’ve been assigned to. There is really no difference across the opinion or straight news shows in terms of what the hosts or anchors ask and what my approach is. I was on “Fox & Friends” this morning, and I will be on “Special Report With Bret Baier” later, and nobody asks me anything differently. I write the same kind of scripts and pull the same kind of elements.

You were pretty young when you were able to score a 2014 interview with the Navy SEAL who killed Osama bin Laden. How did you pull that off?

I got connected with Rob O’Neill through a friend. He and his dad were going to be in town shortly after the Bin Laden raid. And it was not like ‘go and meet this reporter to talk to’; it was just, go and meet my friend Peter. And we went out, we had a couple drinks and some nachos at a bar in Arlington, Va. And then he and I became friends, we kept in touch, and when he was ready to tell his story I went to the bosses in New York and they were real supportive, and they gave me a chance to do it.

How long between the time you met him and the actual interview?

It was more than two years. It might’ve been closer to three years.

And did everybody in the Washington bureau just stop talking to you after the interview aired?

Everybody came up to me and asked, “How did you do this?” Pick up a bar tab in Arlington one weekend, and you never know.

Was anyone at Fox News a big influence on you? Did anybody take you under his or her wing?

The entire time that I had been in Washington, everybody has been really supportive. John Roberts, when a few weeks ago he left the White House so that I could head over there and take the spot that he had. Mike Emanuel has been great and we spend a lot of time together on Capitol Hill. The late Wendell Goler was really supportive as well. And so a lot of the people who had a lot more experience than me, and who were probably way too busy to tell me the way that things worked, always have, and it’s been great.

Your father, Steve Doocy, is a veteran broadcaster. You grew up watching him. What did you learn from him?

I think the most important thing is I learned what is interesting to people and what is not. He really just impressed upon me that it is important to take the news seriously, just don’t take yourself seriously. And I think that we do a pretty good job of that. My first day in New York — I think it was 2009 — and I had a dress shirt on, I did not have a work coat on yet. And we were walking through the basement-level newsroom, which has since been moved, and he looked at me and he said, “Just roll up your sleeves.” And I said, “Why?” He said, “If your sleeves are rolled up, people will just think that you are busy.” And that’s been the best trick of anything, because I’m sure that I’ve convinced many managers that I have been busy on days where maybe I wasn’t.

“Saturday Night Live” used to do a pretty wicked satire of “Fox & Friends.” Did you ever watch it with your father?

We never watched it together, mostly just because he goes to bed pretty early. But we would text it around, and he thinks it’s hilarious.

He once hosted a show that was produced at Studio 8H at Rockefeller Center, where “Saturday Night Live” is staged.

“House Party With Steve Doocy.” Years ago, I was asking him, “What do you think about ‘SNL’ putting a character out that looks like you?” And he said, “The best part is, I know the layout of the set, and this means that somewhere there on that floor, there is a box with a wig in it labeled ‘Steve Doocy’s hair.’”