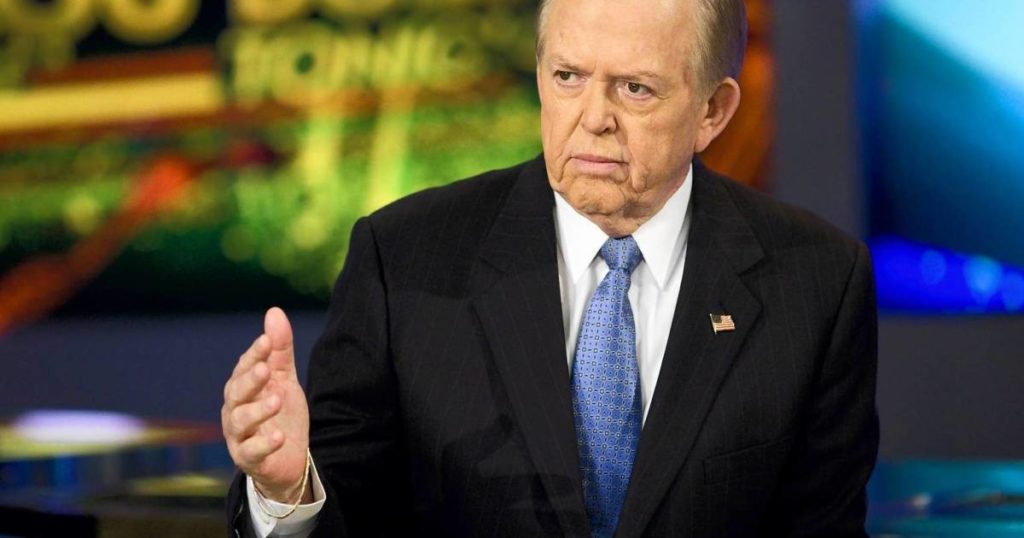 Fox News has canceled “Lou Dobbs Tonight,” the program hosted by television’s staunchest supporter of Donald Trump and of his assertions of voter fraud in the 2020 election, The Times has learned.

Dobbs’ program, which airs twice nightly at 5 and 7 p.m. Eastern on the Fox Business Network, will have its final airing Friday, according to a Fox News representative who confirmed the cancellation. Starting next week, the program will be called “Fox Business Tonight,” with rotating substitute hosts Jackie DeAngelis and David Asman, who filled in for Dobbs on Friday.

Dobbs, 75, remains under contract at Fox News but he will in all likelihood not appear on the company’s networks again. In addition to his Fox Business Network program, he occasionally turned up on the Fox News Channel as a commentator.

The cancellation comes a day after voting software company Smartmatic filed a $2.7 billion defamation suit against Fox News and three of its hosts — Dobbs, Maria Bartiromo and Jeanine Pirro. The company claims the hosts perpetuated lies and disinformation about Smartmatic’s role in the election, damaging its business and reputation.

But people familiar with discussions say the decision to end Dobbs’ program was under consideration before the legal issues with Smartmatic arose. (Fox News said it stands by its 2020 election coverage and will “defend this meritless lawsuit in court.”)

“As we said in October, Fox News Media regularly considers programming changes and plans have been in place to launch new formats as appropriate post-election, including on Fox Business,” the representative said in a statement. “This is part of those planned changes. A new 5 p.m. program will be announced in the near future.”

The network has been reevaluating its programming on Fox News and Fox Business Network since the fall and implemented a number of program and host changes in anticipation of President Joe Biden’s administration entering the White House.

Last month, Fox News shook up its daytime lineup and moved one of its high-profile news anchors, Martha MacCallum, out of her 7 p.m. Eastern time slot. Fox News has turned the hour into an opinion program with rotating hosts until a permanent one is named.

After leading in the ratings through most of 2020, Fox News had fallen behind CNN and MSNBC since the election, as conservative viewers have tuned out. The network’s competitive position has improved in the last two weeks as the number of casual viewers that CNN often attracts in intense news cycles has begun to subside.

The decision on Dobbs — whose views are often incendiary — indicates that Fox News is considering the proper balance of commentary and news to satisfy conservative viewers, who turn to it as an alternative to so-called mainstream media outlets, while not alienating less ideological voters who make up a significant part of its audience.

But viewers should not expect a major shift as Dobbs’ hour likely will be filled with a conservative opinion host.

Dobbs, who was signed to Fox News by its former chief executive Roger Ailes in 2011, has long been the company’s most outspoken supporter of Trump’s economic and immigration policies. In the weeks after the election, he expressed anger on his program that the Republican party did not do more to act on the former president’s claims that the election was rigged in favor of Biden.

Dobbs also gave free rein to Trump lawyers Rudolph Giuliani and Sidney Powell to push conspiracy theories about the election that were either rejected or never presented in court. Giuliani and Powell also are defendants in the Smartmatic defamation suit.

On his Nov. 30 show, Dobbs told Powell he believed Trump needed to take “drastic action, dramatic action to make certain that the integrity of this election is understood or lack of it, the crimes that have been committed against him and the American people. And if the Justice Department doesn’t want to do it, if the FBI cannot do it, then we have to find other resources within the federal government.”

Dobbs has long been a provocateur. His strident anti-immigration views led to his 2009 departure from CNN, where for years he was a signature talent and a pioneer of TV business news with his program “Moneyline.” He won a Peabody Award for his coverage of the 1987 stock market crash.

When he arrived at Fox News, he immediately made waves by questioning the U.S. citizenship of then-President Barack Obama, who was born in Hawaii.

Dobbs’ program typically averaged around 300,000 viewers a night in the 7 p.m. Eastern hour, the largest audience on any business news channel. But his program was a loss leader for Fox Business Network as major advertisers steered clear of it, likely out of fear of consumer boycotts.