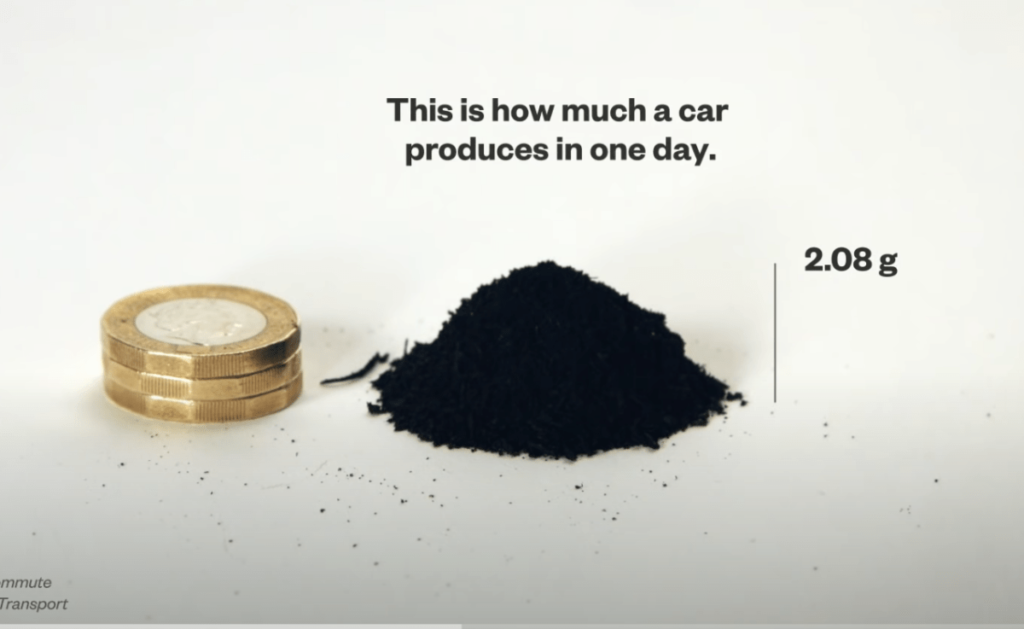 Even if we electrified our entire vehicle fleet overnight, pollution from the production and use of cars would still make us (and the planet) sick — and policymakers should start pushing for strong policy to mitigate the impacts of non-tailpipe emissions now, a new study finds.

Analysts from the Organisation for Economic Co-operation and Development compiled research from around the world about all other ways that motor vehicles poison our communities besides their greenhouse gas emissions. (Let it never be forgotten: transportation is still the single largest drivers of climate change.) The influential intergovernmental organization found that there are at least four ways that cars contribute to a range of deadly public health and environmental crises, and all four of them get worse the bulkier cars are, and the faster they travelled.

That’s bad news, of course, for the SUVs and and pick-up trucks that are significantly more deadly to vulnerable road users, and that are fast becoming the near-default purchase for the American car-buyer. But it’s also bad news for electric vehicles, which tend to be heavier on average that gas-powered cars due to the weight of vehicle-grade batteries. When those batteries are tasked with toting monstrosities like the electric Hummer, the non-exhaust-related emissions of EVs may actually exceed those of internal combustion vehicles, which the researchers said could be a disaster for public health if the popularity of mega-cars continues to rise, even as emissions standards get stronger.

“In the absence of targeted policies to reduce non-exhaust emissions, consumer preferences for greater [driving range requiring larger batteries] and larger vehicle size could therefore drive an increase in [fine particle] emissions in future years with the uptake of heavier EVs,” the researchers wrote.

The study offers yet another reminder of why an over-reliance on electric vehicle adoption as a silver bullet climate change strategy is deeply misguided — and why reducing vehicle miles travelled by promoting greener ways to get around must be at the center of our efforts to save the world. Here are all the ways that even the ‘greenest’ cars on the road are still polluting our places, and what we can do about it.

Normally, we here at Streetsblog staff are big fans of drivers hitting the brakes — especially if it stops them from hitting people. But the trouble is, every time they do it, they’re essentially grinding hot, toxic metals into dust, and then scattering them into the lungs of unsuspecting passersby.

The OECD researchers estimated that about 50 percent of the particles generated from “brake wear” actually end up floating in the air outside of the vehicle, and 33 percent of them are so tiny — on par with airborne coronavirus particles — that they can be inhaled into the deepest parts of a human lung. In the case of particularly old cars with ancient brakes, those particulates might be made up of seriously cancerous stuff like lead, asbestos, and copper, and in newer cars, they often contain elements like hexavalent chromium, cadmium, and mercury, all of which can inhibit the body’s ability to protect against lung infections like COVID-19.

Only four U.S. states — California, New York, Rhode Island and Washington — make it illegal to sell cars with too many heavy metals baked into their brake pads, likely because safer alternatives like brake pads and discs made out of ceramic and organic materials are more expensive for auto manufacturers, and require more frequent replacement by consumers. Mandating that automakers use better materials could be a good start, but analysts say we could also invest in the development of new tech that collects brake particles before they make their way outside a car. Electric vehicles can even be configured to use the heat generated from the act of braking to help power the car itself, which can reduce brake wear by as much as 50 percent.

If you feel guilty every time you buy yogurt in a single-use container, we have some bad news about your car tires.

Automobile tires are the second highest contributor of microplastics pollution (behind only single-use consumer plastics), and the particulates they scatter across our roadways go on to clog our waterways, food chains, and lungs. The impacts on human bodies aren’t yet completely clear, but scientists say microplastics are already threatening global food systems and disrupting our ecosystems.

The OECD researchers recommended that counties restrict the use of tires with particularly deeply studded surfaces, like snow tires, which give off more microplastics than their smoother counterparts. There are also promising new technologies that might help collect tire dust as it’s emitted, like this device from British start-up the Tyre Collective, which it’s advertising with a moody teaser complete with Requiem-for-a-Dream-style soundtrack:

There isn’t yet a techy solution for the emerging problem of 6PPD-quinone, a chemical with which automakers coat tires to protect them from the corrosive effects of ozone in our atmosphere. That chemical, which leaches into the groundwater during rainstorms, was only recently tied to the deaths of huge segments of the salmon population in streams near urban areas — and the problem has been continuing, unchecked, for decades. The researcher who made the historic discovery, Edward Kolodziej, told Science Magazine that he “can’t walk along a street without staring at all the skid marks and wondering what’s there” anymore. (And now neither can you.)

Running super-heavy vehicles over asphalt all day is pretty rough on our roads — and it’s an astonishingly effective way release micro-particles of the hydrocarbon mixture known as bitumen into our air.

In its review of the available scientific literature, the OECD found that up to 5 precent of air pollution in cities was actually made up of teeny tiny pieces of the road itself — and in cold climates where a lot of people use super-abrasive snow tires or “traction sand” to prevent skidding, the percentage can be even higher. Like just about any miniscule, non-organic particulate that you can inhale, bitumen isn’t exactly great for you, and consistent exposure to freshly laid asphalt can cause “dizziness, convulsions, coma or death.”

Worse, the excessive asphalt that’s inevitable in car-dependent places doesn’t even have to be driven on very much to make us sick. A recent Yale University study found that bitumen emissions triple when asphalt is subjected to direct sunlight — a phenomenon that presents a danger to human health even when you don’t consider the astonishing and racially disparate impacts of heat-related illnesses in urban heat islands.

Asphalt dust isn’t the only thing that get kicked up when cars chew up our roadways. They also scatter all the other gross stuff that settles on the ground — and if you have the misfortune of living downwind from an industrial site like a lot of Americans, that stuff can kill you.

In addition to tire, brake and asphalt particles that didn’t make it into human lungs the first time they were shot into the air, our roadways are often coated in pollution matter from America’s toxic manufacturing plants — even if those plants shut down long ago. A 2019 study of the former steel town of Gary, Ind. found evidence of significant amounts of lead, zinc, manganese, chromium, copper, and vanadium on the city’s streets, which are collectively associated with asthma, allergies, chronic obstructive pulmonary disease and cancer. The researchers found the city’s children were particularly prone to heavy metal toxicity because, in addition to inhaling particulates like everyone else, they also play in the street, and “may…get dirt and sediment on their hands, eat a sandwich, and ingest toxic substances.”

The analysts noted that most coatings designed to keep road dust from floating around don’t really work, but said that frequent street washing and sweeping can help, as can regulating vehicle weights that cause disproportionate damage to road surfaces. (Can we please just get a real SUV/truck tax already?) The only problem, of course, is that overbuilt, car-centered road networks are notoriously expensive to clean up — which is a pretty good argument for right-sizing our road network and adopting policies to shift people to other modes.