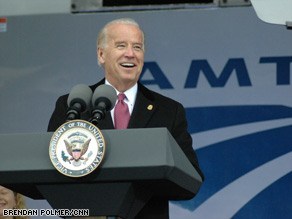 Sustainable transportation advocates are applauding President-elect Biden’s COVID-19 relief plan, but wonder whether it will be enough to save the green modes that millions of Americans rely on — and which cities will get the biggest piece of the pie.

As part of his $1.9-trillion American Rescue Plan, the noted rail enthusiast and incoming president has committed $20 billion in direct relief for U.S. transit agencies, in addition to less-specific commitments to school transportation and state governments that could potentially flow to highway authorities. The proposal was greeted with enthusiasm by transit officials who were disappointed by the diminutive size of earlier relief packages — but they also hinted that they would keep pushing for more.

“The American Rescue Plan is a strong start that will make significant investments in agencies hit hardest by COVID, such as the MTA,” Pat Foye, the CEO of New York’s Metropolitan Transportation Authority, said in a statement. “It’s clear the new administration believes in transit and understands that these investments will jumpstart our economic recovery.”

Transit has gotten a total of $39 billion from the last two bills, but in many cases that’s only been enough to salvage the rest of this fiscal year.

Question 1: How long will the good times roll?

But exactly how long Biden’s “strong start” might sustain badly bruised transit networks remains an open question — especially given how severely the last administration shortchanged them throughout the pandemic.

The CARES Act allocated $10.5 billion to transit agencies in April — less than half of the $25 billion the industry requested in the immediate aftermath of the lockdowns that sent ridership crashing by 91 percent nationwide. The subsequent COVID-19 Emergency Relief Act of 2020, passed in December, allocated another $14 billion, but that was also less than half of the $32 billion that various agencies had started pushing for in September, citing enduring (if possibly unfounded) fears of virus transmission on transit that had suppressed ridership to less than 65 percent of 2019 levels.

Biden’s proposed lifeline would likely get a lot of agencies, but not all, over the hump.

“We’re deeply appreciative of President-elect Biden’s recognition of the importance of public transportation for the country, and how critical it is for our economic recovery,” said Paul Skoutelas, president and CEO of the American Public Transportation Association. “But the question now becomes: how long will this money keep our agencies afloat without having to resort to dramatic cuts? We’ve already sent out surveys to our membership and asked them that question, and we should know more in a couple of weeks. … This plan is good news, but we need to take a hard look and make sure our agencies are actually getting what they need.”

It is incumbent on Congress & the Administration to ensure this inequity of the last package is corrected in the “American Rescue Plan” and ensure the transit funding is provided equitably to all transit systems no matter their location or size.

The second big question looming over Biden’s relief package is which transit agencies will benefit from it most — and which might not.

In a fact sheet, the Biden-Harris transition team noted that all $20 billion would be directed to “the hardest hit public transit agencies,” but didn’t clarify what “hardest hit” meant. That may be a signal that the proposal might limit how much relief smaller agencies could collect in a manner similar to the December relief act, which capped the amount that each urbanized area received at 75 percent of the entire region’s transit operating costs for fiscal year 2018, regardless of how many agencies might be splitting the pot. (There’s one time where the much-maligned MTA would possibly benefit, given its octopine reach into New York’s northern, Long Island and Connecticut suburbs and its operation within the city, too.

That controversial decision stood in contrast to how the first round of relief dollars were distributed: on the basis of pre-COVID Federal Transit Administration formulas, which some advocates argued unfairly privileged smaller agencies whose service is largely funded by federal and state grants (or things like gas taxes, which have also fallen during COVID) rather than fares. Other advocates, though, believe that grant-dependent transit networks need federal aid the most, precisely because their ridership has always been low and fareboxes were already light.

It is incumbent on Congress & the Administration to ensure this inequity of the last package is corrected in the “American Rescue Plan” and ensure the transit funding is provided equitably to all transit systems no matter their location or size.

Question 3: Will roads get too much money?

A third crucial question that drew a little less advocate scrutiny was how much drivers would benefit from the new bill — and how much state highway agencies actually need the lifeline.

A whopping $350 billion, or about 18 percent of Biden’s proposed package, will go to “emergency funding for state, local, and territorial governments to ensure that they are in a position to keep front line public workers on the job and paid.” But it wasn’t made clear how much would specifically go to state departments of transportation, many of which have suspended road expansion projects — which some would argue is a good thing in our already-overbuilt autocentric road network — or have deferred road maintenance, which could be cause for safety concerns.

The Association for State Highway Transportation Officials initially called for $37 billion for “urgent” relief, though the group conceded months later that its members only really needed $16 billion to fully recover their 2020 shortfalls because gas taxes revenues rose more quickly than projected at the start of the pandemic. State DOTs eventually received $10 billion in the December relief package; if they get a slice of Biden’s plan, too, it could easily plug or exceed that gap, while still leaving transit agencies fighting for more.

Of course, the biggest payouts for both dirty and clean transportation providers will probably arrive in step two of Biden’s recovery plan: a massive, as-yet-unreleased infrastructure bill that Biden teased would likely be released in February.

Question 4: Will Congress screw it up (or fix it)?

But first, Congress will need to answer the fourth big question about Biden’s big plan: whether it can actually become law. And with Democrats holding the narrowest possible majority in the Senate (Joe Manchin, a conservative Democrat from West Virginia already expressing skepticism about another part of Biden’s recovery plan), that could be an ugly fight.

“It’s critically important that this plan passes,” added Skoutelas. “Every voice that understand the importance of public transportation needs to speak up.”