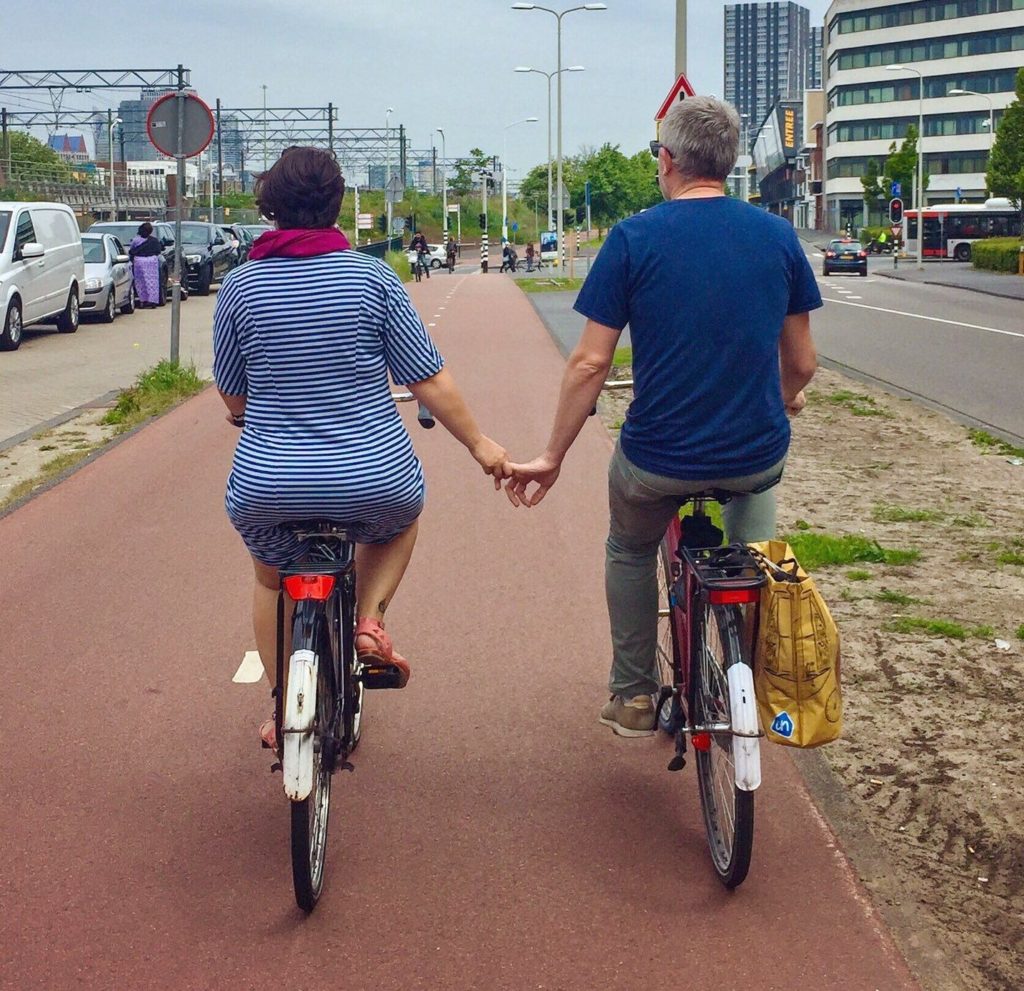 Have a conversation about why America should be less car-dominated, and sooner or later, you’re bound to hear a skeptic say something like this:

“That all sounds great. But American transportation culture will never change. This isn’t the Netherlands!”

Advocates Melissa and Chris Bruntlett had heard it, too — until 2019, when they made the move from Vancouver, B.C.,to the city of Delft in southern Holland. What the couple and their two teenage children learned in the months since is subject of their new book, Curbing Traffic: The Human Case for Fewer Cars In our Lives, which they hope will inspire advocates to question the narrative that car-light life is a luxury reserved only for the Dutch.

Streetsblog sat down with the Bruntletts to bust some of the most enduring myths about the power of human-first transportation planning, and talk about Nederlander life.

Myth #1: Cycling has always been in the Dutch DNA — and America can’t re-engineer itself away from driving

The Dutch didn’t always have cycle tracks running under every windmill — and, for a while, it looked like its efforts to build a national bike-lane network would be DOA.

Much like the United States, the Netherlands initially embraced the automobile, until a wave of traffic-safety activism in the early ’70s and the 1973 oil embargo crisis made universal car dependence controversial and impractical. The government began experimenting with car-free Sundays and other initiatives to lessen the strain, but the first federally funded cycle tracks weren’t built until 1977, with demonstration projects in the cities of Tilburg and the Hague.

Both were quickly declared resounding failures, with some business owners even prying up the tracks in the middle of the night.

“The big problem with [these projects] is just that they didn’t connect to where people really needed to go,” said Melissa. “They were bike lanes to nowhere. And they also were built without a lot of input from business owners and the surrounding community. Those two factors really doomed them, at least in the short term.”

The Netherlands had more success with its third demonstration project: an ambitious cycle network in the Bruntletts’ adopted hometown of Delft, which was designed to connect commuters to work, schools and kinds of shops that women frequent. But even after the success of that project, it took decades to grow the ubiquitous infrastructure that many Americans assume predates cars.

“[Cycling didn’t really take off] until the ’90s, when they codified their big five principles: safety, attractiveness, cohesion, and comfort,” adds Chris. “Over half the bike lanes that we have today were just built in the last two decades. Even the people who live here have no idea how recent this development was. They don’t think of bike lanes anymore than you and I think of our sewage pipes and electricity networks. But they’re pragmatic, so they use what’s there for them.”

The word “bike lane” might conjure an image of an able-bodied speedster on a custom road bike. But after interviewing their Dutch neighbors who live with mobility challenges, the authors found that “cycling” infrastructure can be especially beneficial for people who can’t ride on two wheels.

“For countless people, a bicycle is a mobility aid,” said Melissa. “And in a low-car city that’s designed well, we’re inherently providing streets that give people more space to move in wheelchairs, with canes, and other mobility aids, too. In that kind of space, people with disabilities aren’t just accommodated; virtually the entire public realm is open to them.”

One such person is the Bruntlett’s neighbor Maya van der Does-Levi, who moved to Delft following a multiple sclerosis diagnosis. In the book, she described the city’s bicycle facilities as “emancipatory” for life in a power wheelchair, and praised a municipal program that subsidized the purchase of her adaptive scootmobiel (e-scooter) for short-range travel. Van der Does-Levi says that purchasing an adaptive car would have been far more cost-prohibitive — and relying on such a vehicle would have left her isolated from nature, her neighbors, and much of the independence she enjoys in Delft.

“Requiring a $20,000+ piece of machinery to participate in society is, in and of itself, pretty ableist,”  adds Chris. “Rather than making assumptions about people’s preferences and abilities, let’s just give them options. We’ve lost track of the fact that cycling is a fairly inclusive activity, especially for people with disabilities.”

Myth #3: Safety was the only reason Holland put the brakes on driving

U.S. street-safety activists often bemoan the fact that we’ve never had the large street safety protests that rocked Holland during the 1970s Stop de Kindermoord (Stop Child Murder) movement. But another movement to abate urban noise was just as critical to launching the Dutch cycling revolution.

In 1979, the Dutch government enacted the Noise Abatement Act, which set strict caps on maximum decibel levels in residential and commercial buildings during certain times of the day. Meeting those benchmarks was almost impossible without cutting back on high-speed car traffic, a leading source of noise pollution around the world.

“Once the national noise pollution act was introduced, everyone had to decide whether to do all these expensive things, like putting every building on deep setbacks and rebuilding entire towns, or to simply reduce car travel,” said Chris. “To their credit, the Dutch decision makers recognized really early that there wasn’t much of a choice there.”

That fateful decision had huge ramifications for people with disabilities, too. The book points out that noise pollution is closely linked with depression, which affects 63 percent of U.S. teenagers and 47 percent of millennials and is the leading cause of disability worldwide; people who live with other cognitive and behavioral conditions can also benefit greatly from quieter environments.

The story is a salient reminder that crash safety isn’t the only catalyst for rethinking transportation, and that the other benefits of low-car life can help drive change.

The Bruntletts love their new car-light home — but they’re quick to point out that it’s not only model.

“I get the Netherlands fatigue,” laughs Chris. “In a way, it’s almost become discouraging, because it looks too good on paper, and it’s too hard to imagine your city getting there. But there are communities all over the world that are doing this. You can learn from the Netherlands, or from Montreal, or Auckland, New Zealand, or Bogotá, Colombia. Every city is different and applies these principles in different ways, but the end goal is the same: to curb traffic and put people first.”

The best evidence that the Dutch don’t hold a monopoly on car-light culture are the many cities that have built their own in just the last few years — including the Bruntletts’ former home of Vancouver, Canada, which they say they would have happily stayed in had they not been offered jobs abroad.

“We hear all the time that cycling is just in the Dutch DNA, that they have this naturally egalitarian society that can’t be replicated anywhere else,” said Melissa. “But  after experiencing the investment [in safe infrastructure] that Vancouver made between 2007 and 2019, we really saw the way people’s behavior changed. The Netherlands had its own pivot points, and if they hadn’t happened, it very well could look like any other North American city today. Any city can achieve this, but politicians need to put their money where their mouths are and build the people-centered places they all say they want.”