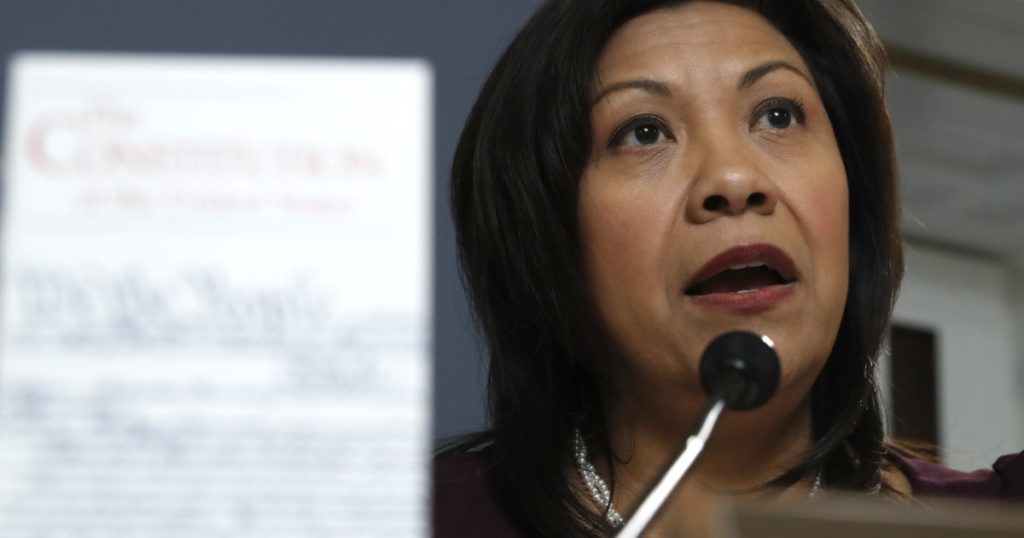 Norma Torres, the lone member of Congress from Central America, is not afraid to speak her mind — sometimes in surprising ways — about immigration, corruption and the land of her birth. Her blunt talk has drawn so much anger from one Central American leader and his followers that she sleeps with a 9-millimeter pistol at her side.

Torres, a Democrat from Pomona, brings a unique perspective on what drives people to flee their home countries.

When she was a toddler and civil war was raging in Guatemala, her parents had used her as something of a human shield on perilous roads, holding her up to the windshield in hopes that seeing a tiny child would stop gunmen from firing into the family car.

Torres had already survived shootouts and a kidnapping attempt. She was 5 when her parents decided they had to get her out of the country.

So one day in 1970, they bundled her up with an uncle in his well-traveled truck and sent her off to California. She thought she was going on vacation.

Living with her uncle and other relatives in the suburban sprawl east of Los Angeles, the young Norma didn’t realize she was staying until her family enrolled her in a school where the kids spoke a language she did not understand. She would not return to Guatemala for years.

Torres, now 56 and representing California’s 35th Congressional District, shook her head as she sat in her spacious Capitol office recently and recounted the stories from Guatemala.

“What the heck were my parents thinking?” she asked.

“But then I think about the circumstances,” she continued. The civil war between a string of U.S.-backed military-dominated governments and leftist rebels raged for 36 years — until 1996. An estimated 200,000 Guatemalans were killed, the vast majority rural, Indigenous people, in what some have called a genocide.

Torres sees the children arriving at the U.S. southern border and recalls her own experience.

“They look like me, it’s like my younger self,” Torres said. “It’s my grandson, it could be my children. It becomes very, very personal.”

When Torres started classes, she was one of the only Latinos in her school. After graduating high school and college, she got involved with union organizing and became a 911 operator for the Los Angeles Police Department.

Handling 911 calls taught her how to keep cool in emergencies, a skill which came in handy Jan. 6, when lawmakers, staffers and reporters were trapped inside the Capitol by a raging mob of Trump supporters. With rioters still pounding on the doors to the House chamber, she posted a photo of a Times reporter online so her editors would know she was safe.

Sitting in her congressional office, decorated with a California state flag and a hand-carved marimba and photos of her three sons and grandson, Torres recalled finally returning to its relative safety at the end of that day, holding a softball bat as she searched for intruders before folding into an upholstered chair and, finally, sobbing.

Her path to Congress began in 1994, when California was debating and ultimately approving Proposition 187, which severely restricted access to public healthcare and education for immigrants without proper documentation. The principal at her son’s school warned he’d have to ask for her paperwork.

Although the U.S. was “all I’ve ever known,” Torres said, she had never gotten around to applying for citizenship. But Proposition 187, she said, propelled her to become a citizen — just in time to vote for President Clinton’s reelection in 1996 — and it made her a solid, lifelong Democrat. She is a moderate, especially on economic issues, but she still blames Republicans for the measure she saw as cruel and racist.

She entered politics in 2001, elected to the Pomona City Council and then as mayor five years later. She served as a state lawmaker from 2008 until running successfully in 2014 for the district encompassing Pomona, Ontario and parts east.

In Congress, Torres cofounded the Central America Caucus and has worked to put restrictions on military aid to the so-called Northern Triangle countries — Honduras, Guatemala and El Salvador.

She started a pilot program to help Indigenous communities in Latin America trade with tribal nations in the U.S., and has worked to ensure the private information of immigrants who applied for temporary legal status under the Deferred Action for Childhood Arrivals program isn’t used against them by immigration officials.

Serving on the powerful House Appropriations and House Rules committees gives her a weighty, if seldom heralded, role: Nearly every piece of legislation that reaches the House floor passes through her hands. Only one other House member has the same committee assignments.

“We must stand strong against #NarcoGov and Dictators in the #NorthernTriangle, otherwise as they say ‘Meet the new boss same as the old boss,’” she wrote on Twitter.

She wants the $4 billion that Biden seeks for the region to go through nonprofits and private groups doing humanitarian and development work there, rather than send it to the central governments, where she says it would go into the pockets of criminals. Torres sits on the subcommittee that decides how, and where, foreign aid flows.

Honduran President Juan Orlando Hernandez, the one she called a narco-trafficker, has kept a low profile despite her criticism.

But not Nayib Bukele, the 39-year-old norm-busting president of El Salvador, who is swiftly consolidating power in the country’s legislative and judicial branches.

He and Torres have exchanged an angry torrent of tweets — as fierce as it is unusual for a foreign leader to tangle with a member of Congress. In one April tweet, Torres included an infamous photograph of a Salvadoran father and his young daughter, dead on the bank of the Rio Grande, where they drowned attempting to reach the U.S.

“This is a result of narcissistic dictators like you interested in being ‘cool’ while people flee by the 1000s & die by the 100s,” she wrote.

Bukele was furious. On Twitter he urged Salvadorans in Southern California, an enormous community, to work to oust Torres from office. “She doesn’t work for you,” he wrote, “but to keep our countries underdeveloped.”

Torres says Bukele also mounted a campaign to flood her district office with phone calls to make it difficult for constituents to reach harassed staffers. The Salvadoran Embassy in Washington did not respond to requests for comment.

The congresswoman says she believes there is cause for concern that some Bukele supporters might turn violent; her social media accounts are inundated with hateful messages and images. And so she sleeps with her gun nearby.

Governments in Central America are notoriously corrupt. Some critics, however, say she should have been more cautious in her criticism. Hernandez, for example, is under investigation by U.S. federal prosecutors in connection with drug trafficking, but that is not the case for Bukele nor for Guatemalan President Alejandro Giammattei, despite their flaws.

She is not backing down, however, and has won praise from several of her colleagues.

“She’s viewed by the broader Democratic Caucus as someone who is a thought leader on these issues because of her life experience, because of her advocacy for kids and because of her knowledge of the region,” said Rep. Pete Aguilar (D-Redlands), a member of House Democratic leadership whose district abuts Torres’.

Colleagues have also rallied to her defense in the fight with Bukele. Testifying to a House subcommittee last month, President Biden’s special envoy for the Northern Triangle, Ricardo Zuniga, said Bukele’s attempt to drive support away from Torres was nothing short of election interference by a foreign power.

And some see racism and misogyny in the attacks, coming as they do from the elite rulers of regions where women and Indigenous people, like Torres, are repressed and treated like second-class citizens.

“And my message is that that is wrong in their country, and that is not acceptable in our country,” said Rep. Raul Ruiz (D-Coachella), chair of the Congressional Hispanic Caucus, “and they messed with the wrong woman.”

Torres also blasted Bukele and the Salvadoran government for paying a powerful Washington law firm nearly $2 million in the last two years for lobbying work she says is often aimed at undermining her legislative efforts. Although it is a common practice, especially for governments with problems in Washington, the Salvadoran contract raised eyebrows because it is being handled by former State Department official Thomas Shannon, who had been one of the agency’s most senior diplomats before his 2018 retirement.

“Instead of wasting millions of dollars on a DC lobbyist for damage control, [Bukele] should use that $ to offset the cost of housing and feeding thousands of innocent children fleeing corruption & gang violence in #ElSalvador,” Torres tweeted on April 9.

Shannon would not discuss details but said El Salvador remains “an important ally and partner” of the U.S. and “President Bukele intends to ensure the strength and vitality of the relationship.”

Bukele is wildly popular in El Salvador, but State Department and other U.S. officials said he has shown increasingly authoritarian tendencies in repressing free speech and media and in consolidating power to silence critics.

Experts also note that the Central American presidents will probably not get the same free pass they received from former President Trump, who was willing to turn a blind eye to corruption and other crimes as long as the men cooperated by keeping migrants away from the U.S.

Hernandez was a visitor to Trump’s Oval Office, even as his brother was being tried in a New York court on drug-trafficking charges. (The brother was convicted and sentenced to life plus 30 years; President Hernandez has denied wrongdoing.)

Bukele showed up in Washington after Biden’s inauguration, but no one would see him. He returned the favor when Zuniga, Biden’s envoy, traveled to San Salvador this month by refusing to meet with him. So far, Vice President Kamala Harris, who is in charge of immigration reform efforts, has only scheduled travel to Mexico and Guatemala, not El Salvador or Honduras.

Torres acknowledged she invited Hernandez to speak to a group of Congress members interested in Central America in 2016 but said she was not aware at the time of the drug allegations. During that time, Honduras was roiled by the slaying of a renowned Indigenous environmentalist, Berta Caceres. Several of Torres’ colleagues boycotted the meeting as a result.

In a letter to Secretary of State Antony J. Blinken sent just days before the Twitter exchange with Bukele, Torres implored the administration to place unprecedented restrictions on the money Biden has proposed for Honduras, El Salvador and Guatemala.

“These three countries have set an example for all of Latin America that it is OK for presidents, for congresses, to sit on their hands and watch their children die en route to our southern border,” Torres told The Times.

“All the Northern Triangle countries are in the same predicament: You have strongmen, and I can’t see a difference between the former president and the new one. It’s the past repeating itself in each country,” she said.

Her thoughts then turned to children — kids who look like her own sons and grandson, and like a toddler long ago used as a human shield.