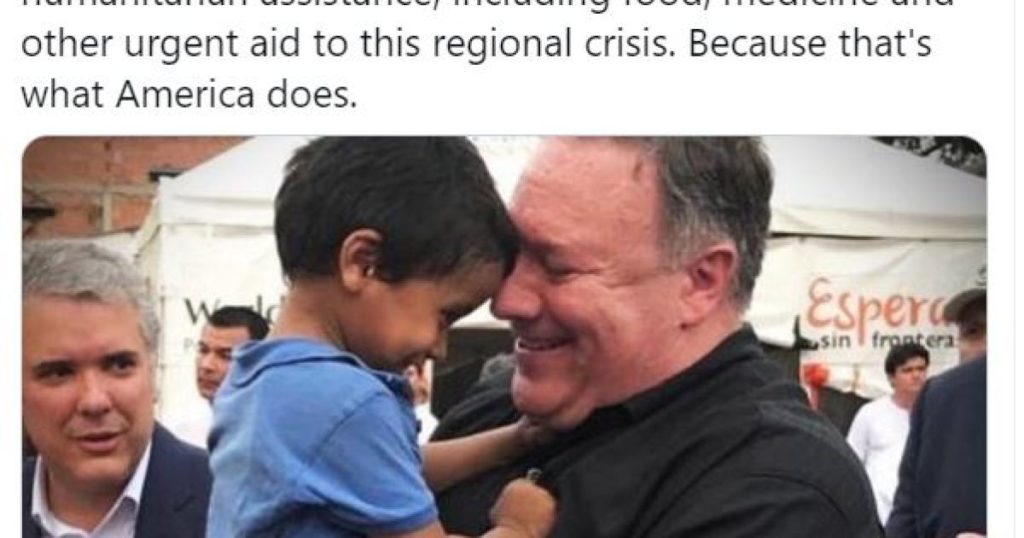 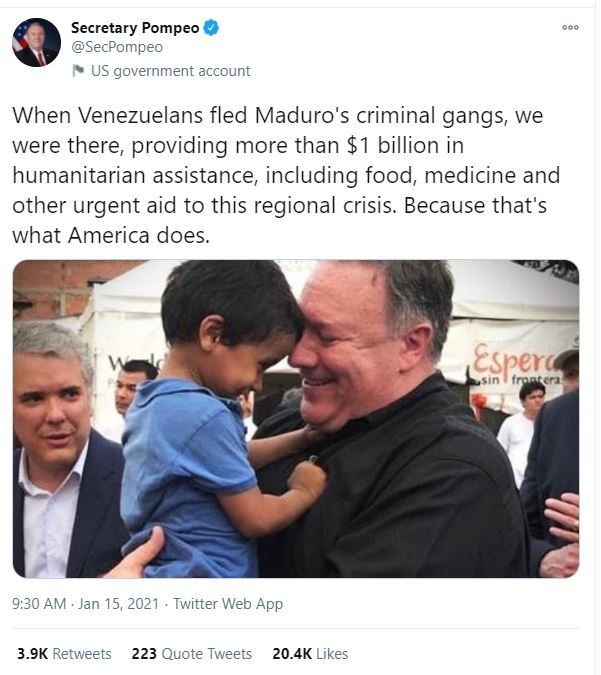 When Secretary of State Michael R. Pompeo launched his unusual Twitter victory lap on New Year’s Day, he promised he would be telling a story about American foreign policy that could not be read anywhere else.

Pompeo, part of a dwindling handful of Cabinet secretaries and senior officials determined to stick with President Trump to the bitter end, has posted scores of messages, boasting about what he claims are his great achievements in nearly three years as America’s top diplomat.

The Pompeo tweet-a-thon will surprise no one who has followed his tenure. He condemned journalists, hailed Trump’s achievements and posted photographs of himself traveling the world.

The tweets generated an intense amount of rebuttal, even ridicule, from Democrats, foreign policy experts and commentators. Pompeo is said to be considering a bid for president in 2024, and a careful review by The Times of his missives reveals as much about Pompeo’s time as secretary of state as it does about the combative politician’s ambitions:

Pompeo claimed to have Swagger, but nobody knows what that means:

Putting aside the obvious question of how humility can be part of swagger, Pompeo began using the term when he took over the State Department in 2018.

He promised to restore “swagger” to the demoralized agency, but after an initial honeymoon, diplomats increasingly chafed at Pompeo’s partisan leadership style and willingness to do Trump’s bidding. It culminated when he refused to publicly defend the U.S. ambassador to Ukraine who testified in Trump’s first impeachment hearing.

Numerous career foreign service officers have quit, been forced into retirement or fired. They were often replaced by inexperienced political appointees. And the number of applicants for the service has plummeted, meaning the pool for future diplomats is shrinking.

The nation’s top diplomat said he stood up to dictators, but not really:

The Trump Administration pushed for a #HemisphereOfFreedom. We didn’t side with dictators, like the last Administration. pic.twitter.com/AmkTBjqooj

In the Tweet above, Pompeo was probably referring to Cuba’s Raul Castro, whom he shunned after an Obama-era rapprochement. However, the list of dictators the administration praised or cozied up to is long. They include Egypt’s President Abdel Fattah Sisi and Saudi Crown Prince Mohammed bin Salman.

Pompeo downplayed atrocious human rights abuses — including the gruesome murder of a journalist allegedly at the hands of the Saudi security service — in the interest of cementing arms deals and other priorities. He also helped open dialogue with North Korea’s leader Kim Jong Un. In the end, though, it was Kim who appears to have benefited most from his meetings with Pompeo and two with Trump. The autocrat received the international standing he craved — and kept the nuclear weapons that the administration hoped to destroy.

Pompeo embodied America First, though experts say the strategy will only hurt the U.S. in the end:

The “America First” strategy often meant America Alone. Traditional allies like Germany and Canada were ignored or insulted. Mexico and several Central American countries were essentially blackmailed, told they would suffer economic sanctions if they didn’t cooperate with the administration to stop migration.

The strategy also led to U.S. decisions to withdraw from treaties and other international agreements as well as several United Nations agencies, such as the World Health Organization.

For a victory lap, Pompeo sure did spend a lot of time trashing his predecessors:

Even after four years in government, Pompeo continued with harsh attacks of former President Obama and his last secretary of State, John Kerry. Contrasting his actions with theirs seemed to be the way Pompeo measured his success.

That has included his policies in the Middle East, where the administration sided overtly with Israel at the expense of the Palestinians. Pompeo reversed decades of norms by recognizing the disputed city of Jerusalem as Israel’s capital and the Golan Heights, captured from Syria, as Israel territory. He declared that Jewish settlements in the West Bank were not illegal, contrary to the position taken by most countries, and became the first secretary of state to visit one. In one of his tweets, he uses the old biblical names of Judea and Samaria to refer to the West Bank, adopting the language of the settlers.

During his tenure, he courted Christian evangelicals — a huge Republican constituency — and delivered political speeches while on the State Department dime. Once a sharp Trump critic, the nation’s top diplomat fully embraced his boss’s bombast. Pompeo’s brash persona, on full display in his final month of tweets, can best be seen as a calculated way to position himself as Trump’s heir in the 2024 GOP primaries.

In one of his final State Department tweets, he even flogged his private handle:

One week from today, I will be stepping aside as Secretary of State and this account will be archived. Be sure to follow me @mikepompeo. Go do it now.