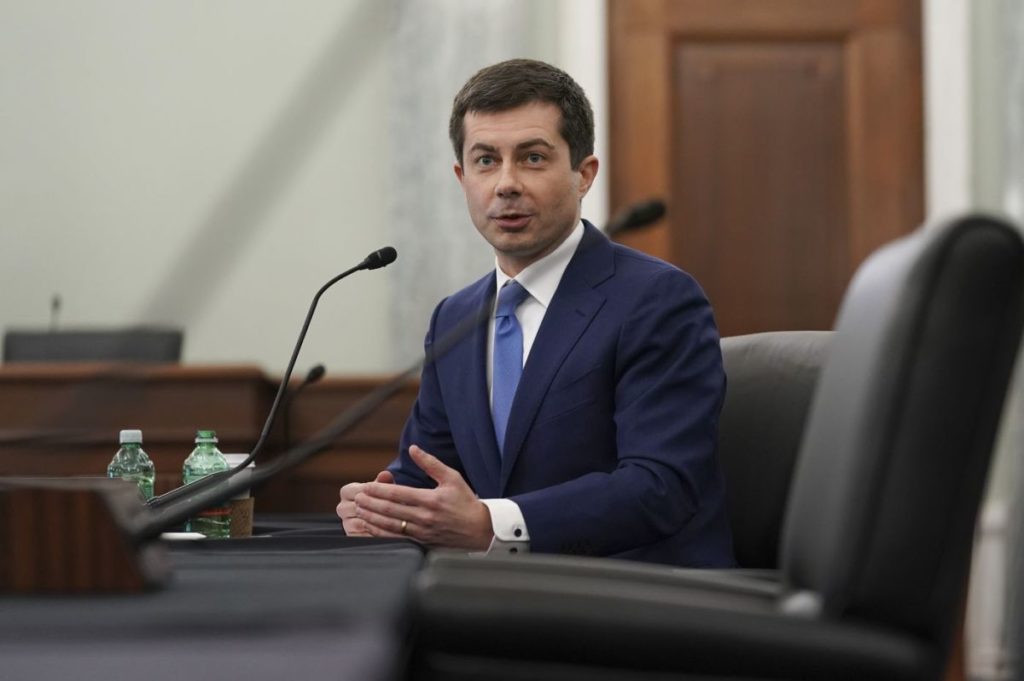 At his Senate confirmation hearings on Thursday, Secretary of Transportation nominee Pete Buttigieg reaffirmed his support for mass transit and complete streets — as well as his intention to execute President Biden’s big promise to electrify America’s cars.

Much of the 2.5-hour hearing was, as usual, devoted to securing Buttigieg’s commitments to the pet priorities of various senators — if you’re a wonk for livestock shipping regulations, you’re in for a treat! — but the former South Bend mayor was also granted a few opportunities to address his vision for how the department would lead on issues of key concern for sustainable transportation advocates.

Chief among them were his potential role in reducing the country’s transportation-related greenhouse gas emissions — something that Buttigieg says will be a defining legacy “when the history books are written about our careers” — as well as curbing our national roadway death toll that claimed the lives of over 36,000 road users last year. Buttigieg’s commitment to increasing mobility access for people with disabilities and addressing the racist legacies of highway building also got brief but meaningful shout-outs — though, notably, his role in ending police brutality against people of color did not.

Advocates largely praised his performance, particularly for his willingness to introduce some of the language of safe streets advocacy into the chambers of Congress, where words like “auto-centric” are rarely used to describe why our road network is so dangerous.

For those who work in this industry, incoming DOT Secretary Buttigieg’s words are a shot across the bow of 70 years’ worth of auto-centric infrastructure. It is not possible to either overstate the significance of this moment or the amount of pushback he will get. https://t.co/xgfunGynIA

Here are the highlights:

Secretary Pete’s use of the word “auto-centric” got a lot of love from advocates, and for good reason; it’s easily the most apt adjective to define the last century of U.S. transportation planning, which has typically privileged the fast movement of cars above all else. But Buttigieg’s full quote was a little more nuanced:

There are so many ways that people get around, and I think often we’ve had an auto-centric view that has forgotten, historically, about all of the other different modes. We want to make sure anytime we’re doing a street design that it enables cars, and bicycles, and pedestrians and any other modes — and businesses — to co-exist in a positive way, and we should be putting funding behind that.

Advocates who understand the importance of at least some car-free spaces in American cities might not be quite as thrilled with the would-be Secretary’s insistence on the peaceful “co-existence” of multi-ton automobiles and people traveling outside vehicles. But it’s still exciting to hear the next DOT leader openly challenge the notion that streets are the domain of cars alone — and signal support to fund the sort of infrastructure and policy change that could make multimodal travel a real (and safe) possibility for more Americans.

2. A not-so-subtle nod to Vision Zero

As a presidential candidate, Buttigieg famously proposed a national commitment to end traffic violence deaths in the U.S., but some questioned whether he’d stick to his guns once Biden, who failed to include a federal Vision Zero commitment in his own transportation plan, became his boss. But Buttigieg did send one positive signal:

Over the course of my lifetime, we’ve made a lot of gains as a country on dealing with the effects of drunk driving on road safety and fatalities, only to see distracted driving rise to become a new and deadly effect. I believe the number stands at something on the order of 36,000 or 38,000 lost in a single year to crashes on the road. We cannot accept that and we need to move toward a vision where every trip is a safe one, whether it’s long or short, on any of America’s roadways.

Buttigieg’s numbers were pretty right on the money — the U.S. lost 36,096 people to traffic violence in 2019 according to NHTSA, and “38,000” is a number frequently cited by advocates as a good, rough average for our annual roadway death toll over the past 20 years. And of course, he’s absolutely right that every one of those deaths is unacceptable.

.@PeteButtigieg is facing the Senate today to be confirmed as the new secretary of @USDOT. We have some questions for him too.

3. Complete Streets gets a shout-out

The surprise breakout star of Buttigieg’s confirmation hearing may have been Hawaii Senator Brian Schatz, who gained some fans in the safe streets crowd when he asked the nominee whether he would “clarify that the objective [is to] not to always think in terms of widening the aperture through which the maximum number of cars can move at the maximum speed.” (He also lamented that “our departments of transportation tend to be the departments of cars” — a slogan which belongs on a coffee mug, stat.) Buttigieg’s response earned him some high-fives on Twitter, too:

When we were undertaking a Complete Streets approach in the city of South Bend, it meant a lot to us to have moral support from folks in the [U.S.] DOT under Secretary [Anthony] Foxx, who agreed with that vision. I think it’s very important that we recognize the importance of roadways where pedestrians, bicycles, vehicles in any other mode can coexist peacefully. That Complete Streets vision will continue to enjoy support from me, if confirmed.

Of course, the idea of “complete streets” is only one part of the sustainable transportation puzzle, and it would have been nice to see the nominee acknowledge that slapping a bike lane and a sidewalk on an otherwise car-dominated road often isn’t always much better than giving vulnerable road users no accommodations at all. But it’s still exciting to know that the soon-to-be Secretary includes the phrase in his daily vocabulary — and considers his experience building people-centered roads to be a highlight of his resume.

4. Lots of vagueness on AVs

All Senate confirmation hearings involve at least some awkward needle-threading. But Buttigieg’s responses to the many, many questions he received about how his DOT would regulate autonomous vehicles were unsatisfying, even for a bipartisan grill session:

Automated vehicle technology is coming, it’s advancing very quickly, it is something that holds the potential to be transformative, and I think in many ways, policy has not kept up. [We need to] make sure that we’re acting so that, on the policy side, we are ready for all of the things that AVs are going to bring to our roads and to our economy.

Buttigieg did not clarify what sorts of “things” AVs might bring to our roads, especially if they continue to be tested on public right-of-ways without the full knowledge or consent of the public. Hopefully not more dead walkers.

5. A ton of love for trains

In addition to proving his fitness to lead the nation’s highest transportation authority, Buttigieg also took a moment during his hearing to basically write your next online dating profile for you:

I’m probably the second biggest passenger rail enthusiast in this administration. I enjoy long train trips as well as short ones, and I think Americans ought to be able to enjoy the highest standard of passenger rail service.

The biggest train fan of all, presumably, is Buttigieg’s soon-to-be boss. (No word on whether Buttigieg also enjoys long walks on the beach in addition to long rides on the South Shore Line.)