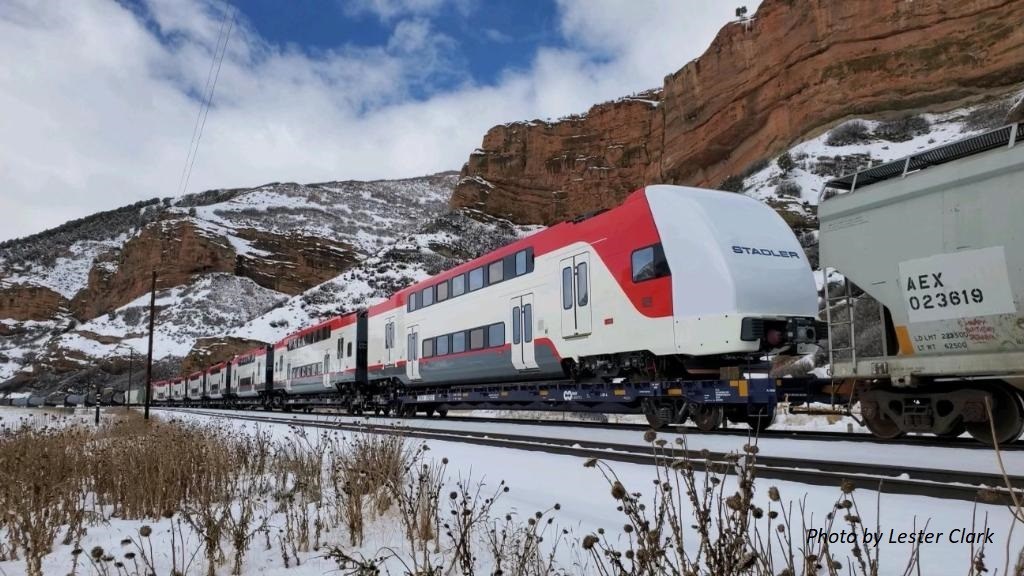 Here are a few Streetsblog news nuggets to start your weekend.

While Caltrain crews have been busy stringing wire on the mainline, over in Utah construction continues on its electric train sets. The first one is now completed and, as seen in the lead photo, is getting a ride out to Pueblo, Colorado, for testing. From Caltrain’s release:

Electric trainset #1 is on its way to the Transportation Technology Center, a railroad testing and training facility in Pueblo, Colo. There it will be tested at and above the top speeds allowed on our corridor and undergo tests simulating operating conditions.

For those not familiar, Pueblo is home to a 52-square mile facility with test tracks for certifying American railroad equipment. Part of that is a “13.5 mile long Railroad Test Track … used for high-speed testing up to 165 mph.” Basically, it’s a huge loop with overhead electrification. That’s well within the planned top speeds of Caltrain’s equipment (on a related note, this is why California High-speed Rail needs the Central Valley spine for its project–there’s currently no place to test trains in North America beyond 165 mph).

This means a few months of testing and, if all goes well, the train will finally ship out to the Bay Area–a major milestone in Caltrain’s electrification project.

Streetsblog is a bit late on this, but when it comes to artwork, it’s definitely a case of better late than never. In January SFMTA announced its Muni Art program winners. This year, of course, the art program was done virtually, so there wasn’t the usual announcement event and unveiling. Nevertheless, readers should give themselves a treat and take a look at all the gorgeous art that will be displayed this year on Muni trains and buses.

From the Muni release:

The 2021 theme, “San Francisco United” is the sixth year that the SFMTA, San Francisco Beautiful and The Poetry Society of America (sponsors of Poetry in Motion ®) have collaborated to bring art and poetry to Muni riders.

“Now more than ever—it’s important to appreciate and be thankful for the positives around us,” said Jeffrey Tumlin, SFMTA Director of Transportation. “That’s why we’re looking forward to bringing Muni Art back and sparking some joy in the wake of such a difficult year.”

Begun in 2015, Muni Art is the only public art project that exclusively features San Francisco artists and poets. The artists’ original work and five poems selected by the Poetry Society of America, is presented on 100 Muni buses throughout San Francisco from January through April, 2021.

Free Muni for the Duration of the Pandemic?

As readers have no doubt seen, Muni and other transit agencies are offering free trips to vaccination sites. Now San Francisco Supervisor Dean Preston wants to take it up a notch, by offering free fares to everyone as the city for the rest of the pandemic. From a release from his office:

The request follows MTA’s recent announcement that the City would begin offering free Muni service to people traveling to and from COVID-19 vaccination appointments. Supervisor Preston welcomed this step to reduce barriers to vaccination, promote public transit use, and save transit riders money during these tough economic times. But Preston argued that the program should be expanded to cover all travel during the pandemic. The current approach grants fare-free travel to people going to get vaccinations, but leaves people going to get COVID tests, health care workers commuting to work, patients on their way to medical appointments, residents going to grocery stores, families going to childcare, and others paying for their essential travel during the pandemic.

Preston goes on to argue that with “the improved federal funding under the Biden Administration, and fare revenues at historic lows, the financial case for eliminating fares has become stronger. Transit advocates believe that elimination of fares is key for equity and also for the long term survival of public transit as people get back on buses and trains.”

Other transit systems in California have explored this–including an upcoming L.A. Metro pilot–but so far only a few small transit systems in the U.S. have actually gone through with the idea and eliminated fares. In the Bay Area, VTA and AC Transit eliminated fares for a few months at the start of the COVID crisis, but only to give them time to install plexi-glass shields to protect operators.