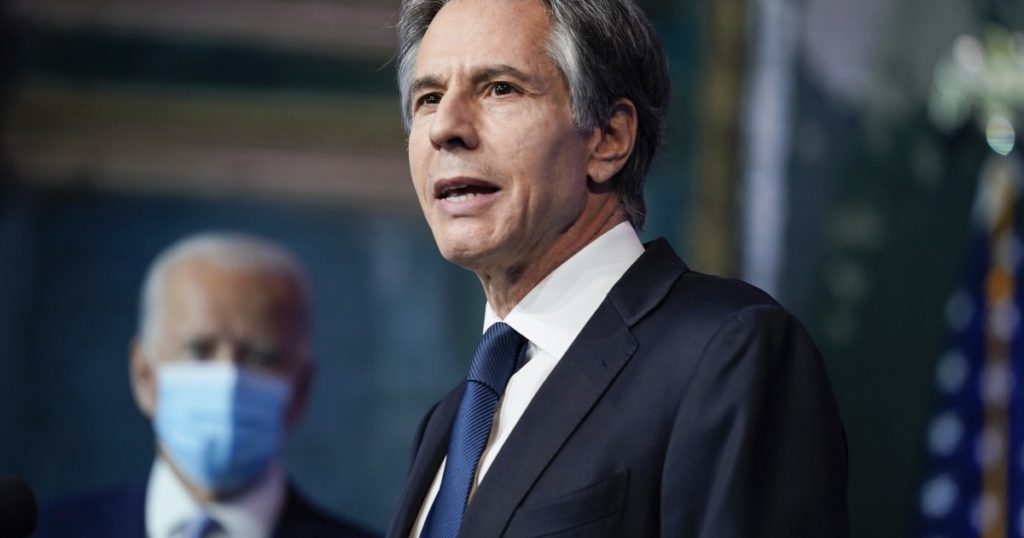 The Biden administration on Wednesday unveiled what it was describing as a new era of American diplomacy that would reverse many of former President Trump’s actions and reach out to scorned allies.

“The world is watching us intently right now,” Secretary of State Antony Blinken said on his first day on the job. “They want to know if we can heal our nation. They want to see whether we will lead with the power of our example.”

The administration is attempting to reassure the world that U.S. belief in multilateralism — cooperation with other countries on numerous global issues, including the pandemic and climate change — has returned.

As State Department employees were greeting Blinken, Linda Thomas-Greenfield was testifying to a Senate committee vetting her nomination as the U.S. ambassador to the United Nations.

Thomas-Greenfield is a well-regarded Black diplomat who was forced out of her senior State Department position when Trump arrived at the White House. She seemed destined for easy confirmation, despite some Republican questioning over a 2019 speech that some suggested was favorable to Beijing. She pledged to work “aggressively against Chinese malign efforts” at the U.N. and elsewhere.

In its first week, the Biden administration has already reversed several of Trump’s most controversial moves. The administration returned the United States to the landmark Paris climate accord — Trump had made the U.S. the only country in the world to withdraw — and on Tuesday announced restoration of diplomatic ties and financial aid to Palestinians.

Other plans, such as salvaging the international nuclear agreement with Iran, will take longer, and still others — including confronting China — may not be significantly changed at all.

Speaking later to a dozen reporters in his first news briefing at the State Department, Blinken said a raft of Trump measures — many taken in the final months of his term in office — were under review but that he was giving priority to the designation of the Iran-backed Houthi rebels fighting in Yemen as a terrorist group.

Former Secretary of State Michael R. Pompeo made the call, under pressure from Saudi Arabia, in one of his final acts. It has been widely condemned by members of Congress and international aid groups because the designation makes it even more difficult to deliver desperately needed humanitarian aid.

By most estimates, the Houthis control territory where roughly 80% of the Yemeni population resides. Blinken acknowledged that the Houthis had committed abuses but said the Saudis, who back the Yemeni government, had exacerbated the humanitarian crisis there. Saudi airstrikes have killed legions of Yemeni civilians.

Blinken recounted Biden’s telephone call from the previous day with Russian President Vladimir Putin. In sharp contrast to his predecessor, Biden complained to Putin about Russian interference in U.S. elections, possibly placing bounties on U.S. soldiers in Afghanistan and the poisoning of Russian opposition leader Alexei Navalny, who survived but was jailed upon his return to Moscow.

“It remains striking to me how concerned — maybe scared — the Russian government seems of one man,” Blinken said of Navalny.

Blinken’s first briefing with reporters was a 20-minute globe-spinning feast of questions.

Asked how he expected to restore the world’s trust in U.S.foreign policy, Blinken said he had spent the last 24 hours on the phone to an estimated dozen allies from the Americas, Asia and Europe.

“One thing I picked up from those conversations, already, was a very, very strong desire for the United States to be back in the room, back at the table, working with them,” Blinken said. “It was almost palatable.”