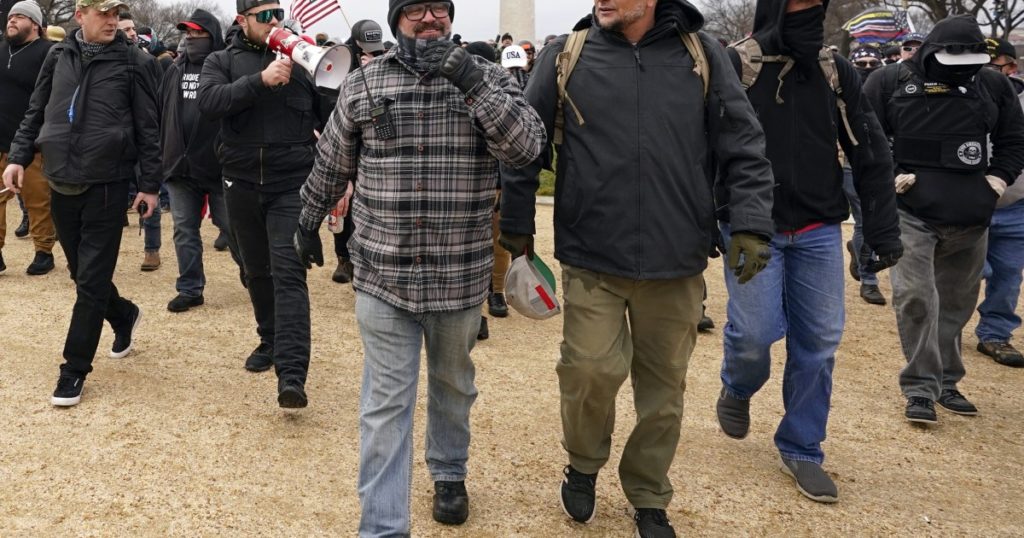 The Justice Department is asking a federal judge to revoke the pretrial release of two members of the far-right Proud Boys charged in the U.S. Capitol attack, citing new evidence that alleges the men pose a threat to the public.

The move is the most aggressive yet by federal prosecutors seeking to keep members of the Proud Boys and other extremist groups behind bars pending trial. Federal prosecutors have argued, at times unsuccessfully, that members of such groups are too dangerous to remain free.

Of about 400 people charged in the Jan. 6 storming of the Capitol, the Justice Department alleges about three dozen were members or leaders of the Proud Boys or Oath Keepers, most of whom have been released pending trial.

Three accused members of the Oath Keepers were released last week by a judge who turned aside objections of prosecutors citing the threat they posed to the community. Among the Proud Boys who have been released are Ethan Nordean and Joseph Biggs, whom prosecutors will seek to return to custody at a hearing Thursday before U.S. District Judge Timothy J. Kelly in Washington. Legal experts say prosecutors will have a tough time convincing Kelly to detain the men.

Nordean, 30, and Biggs, 37, were freed from detention shortly after their arrests in January. Since then, the men have been indicted on conspiracy charges, and prosecutors say federal agents have uncovered messages from an encrypted chat group that show the men are too dangerous to remain confined at home. Both men have pleaded not guilty to the charges.

“Allowing [Biggs] to stay on pretrial release, even in home confinement, would leave a man who has the wherewithal to help plan and lead a large group of men in a violent attack to take similar actions in the future in furtherance of his goals. And there is every reason to believe he, like his co-defendants, poses the same risk of danger to others and [to] the community that he posed leading up to and on January 6,” prosecutors wrote, using similar language in court documents to describe the threat posed by Nordean.

The Justice Department has focused intense attention on the role right-wing groups such as the Proud Boys and Oath Keepers played in instigating the riot, which sought to disrupt Congress’ counting of electoral college votes that certified Joe Biden’s presidential victory.

In court documents last week, prosecutors alleged that a leader of the Oath Keepers, described by federal authorities as a large and loosely organized anti-government militia, coordinated his group’s Jan. 6 activities with the Proud Boys and another far-right organization. Prosecutors argue that the groups led the charge to breach the Capitol, allowing the large pro-Trump mob to swarm the building. Five people died in the melee.

The Proud Boys are considered to be a hate group by the Southern Poverty Law Center, and the Anti-Defamation League calls the group representative of “an unconventional strain of American right-wing extremism,” adding that although “the group can be described as violent, nationalistic, Islamophobic, transphobic and misogynistic, its members represent a range of ethnic backgrounds, and its leaders vehemently protest any allegations of racism.”

The group, whose members have been known to engage in violence, describes itself as a “pro-Western fraternal organization for men who refuse to apologize for creating the modern world.”

Lawyers for Nordean and Biggs said the men should remain free because they do not pose any threat. They have no criminal histories, the lawyers said, and have not violated any terms of their home confinement. Two judges have already ruled they were not dangerous enough to confine in jail, the lawyers noted.

“Nordean has flawlessly complied with the conditions of release to date, belying the government’s claim of risk to the community,” David B. Smith, an attorney for the Washington state resident, wrote in court papers.

Prosecutors may have a tough time convincing a judge to detain the men because they are already free and have not violated any judicial orders, legal experts said.

“Once someone has been released — unless they commit a new offense or violate terms and conditions of release — it’s going to be difficult to get those terms changed or revoked,” said Peter Zeidenberg, a former federal prosecutor. “What this does show is that the Justice Department is taking a very aggressive stance on these cases.”

Federal prosecutors obtained an indictment March 10 alleging that Nordean, Biggs and two alleged Proud Boys encouraged members of their group to attend President Trump’s “Stop the Steal” rally Jan. 6, helped plan their group’s role in the attack on the Capitol, led the storming of the building and breached barricades.

In seeking to confine the men, prosecutors cited social media posts in which Nordean and Biggs called into question the election results and urged their members to take action. Prosecutors also disclosed newly discovered messages from an encrypted chat room that they argued demonstrated both men played leading roles in the conspiracy.

On Jan. 5, prosecutors wrote, Biggs posted that the Proud Boys in Washington were “trying to avoid getting into any s— tonight…. Tomorrow is the day.”

Another co-conspirator, Charles Donohoe, wrote that Nordean was “supposed to be” leading the group, the indictment alleged. Prosecutors are seeking the continued detention of Donohoe, 33, of North Carolina. Donohoe, who has been held since his arrest March 17, has a detention hearing set for April 6.

Nordean “is in charge, cops are the primary threat, don’t get caught by them or [Black Lives Matter protesters],” an unnamed co-conspirator wrote that night, according to the indictment.

After the Trump rally, Nordean and Biggs led other Proud Boys to the Capitol, where they broke barriers and surged past police, prosecutors said.

“As a leader of the Proud Boys members who stormed the Capitol on January 6, [Biggs] presents a danger not only based on his own potential violence, but violence by others who undoubtedly still support him,” prosecutors wrote in their detention filing.

Defense lawyers argued that prosecutors have been selectively quoting from among 1,500 pages of chat messages that can be read different ways. Prosecutors’ arguments are “pinioned on a handful of speculative, somewhat dramatic interpretations of certain ‘new evidence’ of instructions Biggs gave on, before and after January 6. They are subject to several interpretations,” wrote John Daniel Hull, Biggs’ attorney.

Hull added that Biggs is also not a threat because he has what the lawyer described as a good relationship with the FBI. In planning Proud Boys counter-protests and rallies in Portland, Ore., in 2019 and last year, Hull wrote, Biggs spoke extensively with FBI agents and local police about his group’s activities.

“These talks were intended to both to inform law enforcement about Proud Boys activities in Portland on a courtesy basis but also to ask for advice on planned marches or demonstrations, i.e., what march routes to take on Portland streets, where to go, where not to go,” Hull wrote.

The Department of Justice declined to comment regarding Hull’s characterization of his client’s relationship with the FBI.

Despite the department’s efforts to focus on the men’s alleged efforts to coordinate activities Jan. 6, former federal prosecutors said the new evidence didn’t strike them as substantial enough to return Biggs and Nordean to jail.