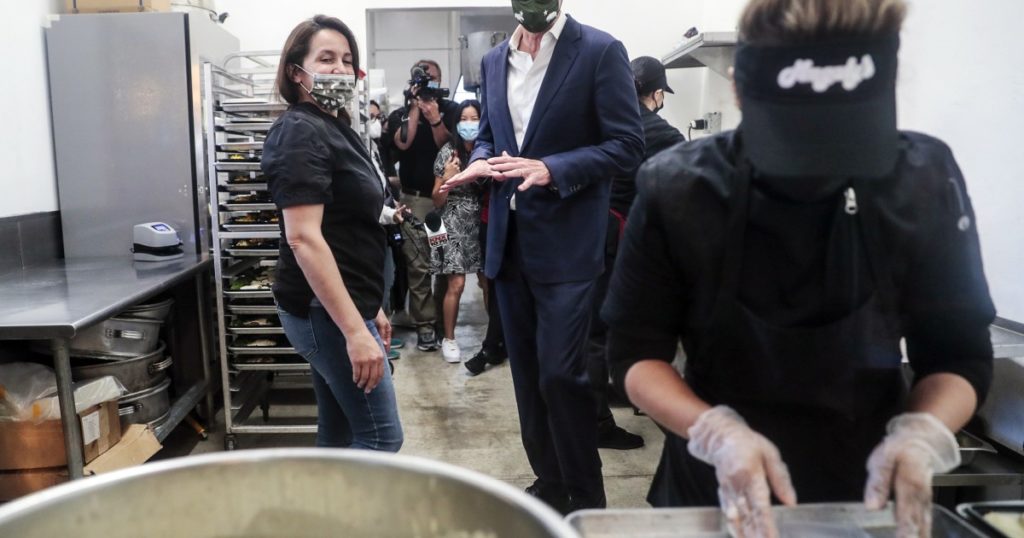 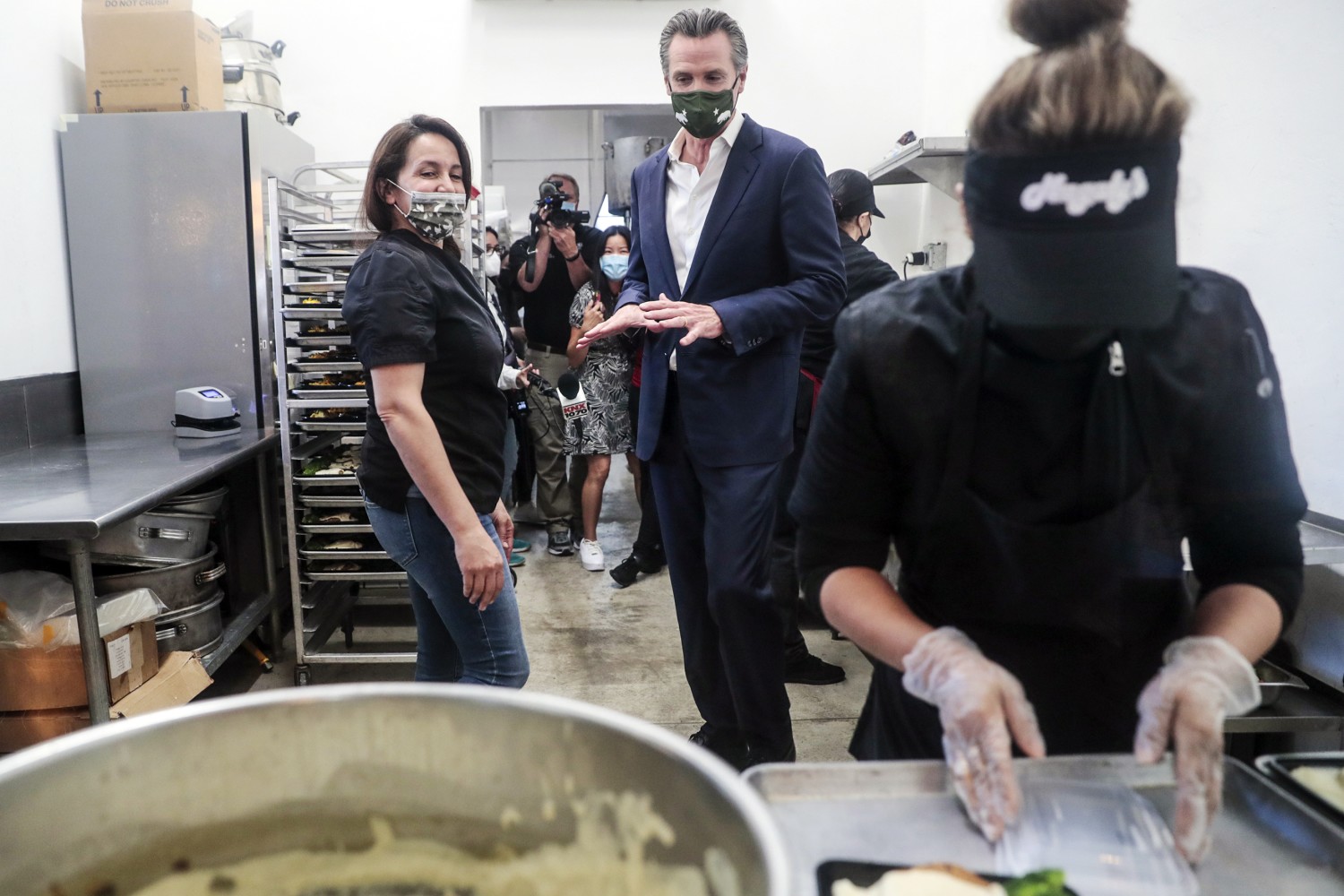 Millions of savings accounts for children seeded with $500 each. Delinquent water bills wiped away. Checks cut to thousands of small businesses.

The rapid-fire rollout this week of Gov. Newsom’s state budget proposal lays out a vision of expansive government aid — a plan turbocharged by the COVID stimulus bill championed by President Biden.

The California governor is not alone in opening the spending spigots. With a total of $350 billion in federal stimulus flowing to state and community coffers, governors, legislators and local politicians across the country are facing an unprecedented opportunity to advance their policy priorities — and reap the political benefit.

The aid is a key component in the $1.9-trillion COVID relief bill that is so far the defining initiative of Biden’s presidency. But state and local leaders see opportunity to enhance their own legacies as well. For governors eyeing tough reelection battles next year — or, in the case of Newsom, an impending recall vote — the windfall may enrich not only their state budgets, but also their campaign prospects.

“Of course it’s a political boon,” said Rob Stutzman, a Republican consultant based in Sacramento. “Handing out money, shockingly, is always popular.”

That doesn’t mean the money is free from partisan squabbling. The legislation, passed without a single GOP vote in Congress, has come under fire for possibly overshooting the mark, anticipating state budget deficits that largely didn’t materialize.

Still, many states — led by Democrats and Republicans alike — have quickly begun to contemplate how to spend the gobs of cash coming their way. At the same time, states still have previous rounds of relief from the Trump era at their disposal, with some governors finding creative ways to use those dollars to boost vaccination rates. West Virginia Gov. Jim Justice, a Republican, is offering $100 savings bonds to young adults for getting their shots; GOP Gov. Mike DeWine of Ohio just announced $1-million lottery drawings for vaccinated residents.

As blueprints to spend this latest package — the American Rescue Plan — are drawn up, several trends have emerged. Many states want to replenish their unemployment insurance trust fund, which were depleted by the surging need for jobless benefits last year. Officials are eyeing upgrades to bridges and sewer systems and affordable housing projects.

“This is $1,000 per [American] in flexible state and local aid,” said Josh Goodman, a researcher on state fiscal management for the Pew Charitable Trusts. “That really is a substantial amount of money — money that states and local governments can do quite a lot with.”

The aid will come in two tranches — the first half will be disbursed this month, and the rest next year — and governments will have until 2024 to commit the dollars. It gives recipients broad latitude and imposes a fairly short list of prohibited uses: among them are tax cuts and deposits in pensions or rainy day reserves.

“It is very, very unusual to have a federal program that has so few strings attached,” said Linda Bilmes, an expert in budgetary and public financial issues at the Harvard Kennedy School.

The Biden administration is determined not to see a repeat of the Great Recession, where state budget shortfalls prolonged the nation’s economic pain. This time around, however, state finances have not been as decimated as predicted.

California, for example, enacted cuts in its 2020 budget to gird against a pandemic-ravaged economy. But state tax collections swelled last year, aided by a booming stock market, and this week Newsom announced a $75.7-billion surplus — before even factoring in the $27 billion en route from the federal government.

The governor has fully embraced the state’s flush fiscal outlook. The litany of proposals are part of the $100-billion “California Comeback” plan he detailed Friday. The final budget must be hashed out with the Legislature by June 15.

Newsom has suggested uses for all $27 billion en route from the federal government. He’s included major initiatives such as the child savings accounts and relief for overdue utility bills, and smaller-ticket items like boosting K-12 interscholastic sports leagues.

Washington picking up the tab on those priorities frees up state money to be spent elsewhere, and Newsom’s budget includes a slew of other benefits — including a fresh round of $600 stimulus checks and $12 billion to house the homeless — that would not be tied to federal stimulus dollars.

“Certainly now there’s the flexibility to put that program in place without feeling it’s coming at the expense of something else,” he said.

The exuberant spending plan comes as Newsom prepares to fend off a recall attempt, ensuring that every move he makes — budgetary or otherwise — will be viewed through a political lens. The governor demurred when asked this week if he was seeking to gin up good publicity; others point out the budget plan tracks with his prior proposals.

“From a consistency perspective, the governor is doing the same things he was doing before the recall qualified,” Hoene said. The difference now, with more resources at his proposal, is “just a matter of scale.”

Newsom’s opportunity to deluge the state with giveaways is unlikely to convert the most stalwart Republican voter. The political landscape is too entrenched with partisan tribalism, said Norm Ornstein, a political scholar at the American Enterprise Institute.

Still, “you’ve got an opportunity — if not to turn them to be your allies — at least to keep them from being so pissed off they turn out in record numbers against you,” Ornstein said.

Nationally, the money has helped governors burnish their image — and at times, led to clashes with partisan foes.

In Colorado, Democratic Gov. Jared Polis, who is up for reelection next year, launched a statewide listening tour to solicit suggestions on how to spend the $4 billion in federal aid — a move that Axios Denver, a political newsletter, dubbed “as much about politics as substance.”

Democratic Gov. Andy Beshear of Kentucky was one of the first to appropriate American Rescue Plan funds, signing a bill in April that would invest in water infrastructure, build schools and make broadband Internet more accessible — a package that would create an estimated 14,500 jobs. He has played up the bipartisan nature of the agreement, a helpful selling point for a Democrat in a deep red state.

“He’s touting he can work with Republicans in a supermajority legislature to get things done for people,” said Jason Bailey, executive director of the Kentucky Center for Economic Policy.

Beshear and Republicans struck a deal on part of the stimulus money, which included paying down Kentucky’s unemployment insurance fund. To spend the rest, Bailey said the Legislature may be less inclined to back other forms of aid, such as direct payments to people and businesses, particularly as the next gubernatorial race in 2023 approaches.

“There is a concern that money that’s intended primarily for relief and for immediate harms of COVID-19 will be held back for political or ideological reasons,” he said. “That would be a mistake, when we have so much hardship, especially in a state like Kentucky.”

Republicans in multiple states have also chafed at the requirement that the $350 billion cannot be used, directly or indirectly, for tax cuts. Several GOP attorneys general have filed lawsuits arguing the rule is overly broad.

“I’ve certainly heard a lot of reluctance from state officials and state legislators — is what we want to do going to violate this provision?” said Joseph Bishop-Henchman, vice president of tax policy and litigation at the National Taxpayers Union Foundation, the research arm of a small-government advocacy group.

The Treasury Department released new guidance this week, clearing up some confusion, but the legal fights are likely to continue.

The greater political risk to the stimulus funds is the possibility that voters may come to see the spending as overkill. Already, Republicans are pointing to California’s healthy surplus as proof that the federal aid package was unnecessary.

“This is one more reason why borrowing and sending tens of billions to California was a crying shame — and why every Republican in Congress opposed it,” Utah Sen. Mitt Romney said on Twitter. Despite voting against the legislation, many Republicans in Congress have touted other features of the package, including a relief program for restaurants.

Seizing on last week’s disappointing jobs numbers, multiple Republican states are rejecting another component of federal COVID aid — enhanced unemployment benefits — because they say the extra money is an incentive for people to stay at home when employers are struggling to find workers. (Economists say a number of factors, including the supplemental payments, safety concerns and lack of child care, may be at work.)

While polls have shown strong support for the stimulus plan so far, any sign that this torrent of spending could have negative consequences for the economy — such as the simmering concerns of high inflation — could turn the package into a political albatross.

“With inflation going up, particularly [for] food and fuel, and then that bad jobs report — three or four months from now, all this assistance maybe doesn’t look so popular to most voters,” said Stutzman, the Republican consultant.