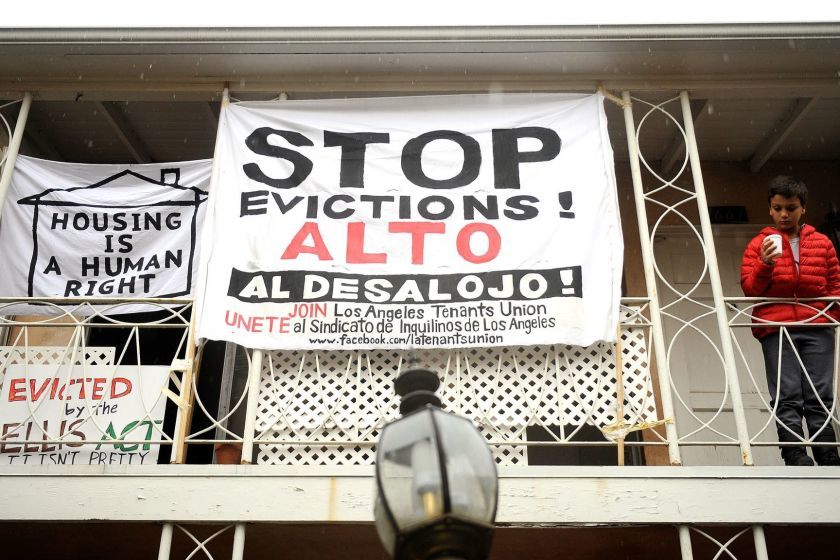 A federal moratorium on rental evictions is set to expire Saturday, putting many Americans on the brink of homelessness as the highly transmissible Delta variant threatens a return to normalcy.

A scramble by Democrats in Congress to extend the moratorium fell short Friday night before the House adjourned for August recess.

The COVID-19 pandemic-fueled economic downturn cost millions of people their jobs, triggering a backlog of unpaid rent and utilities worth billions. Landlords, who have borne the brunt of tenant delinquency, have repeatedly challenged the federal government’s ban in court.

The U.S. Centers for Disease Control and Prevention earlier this summer extended its eviction ban for an additional month but said that was “intended to be the final extension of the moratorium.” The federal agency had said keeping people in their homes and out of crowded living facilities was key to slowing the spread of COVID-19.

A high court warning on any further extensions, and state and local governments’ failure to quickly get federal rent relief to people in need has many fearing mass evictions.

More than 3.5 million people in the U.S. said they could face eviction in the next two months, according to the U.S. Census Bureau’s most recent Pulse survey, from early July.

Why didn’t Biden extend the ban?

The White House said the Biden administration would have extended the moratorium were it not for the Supreme Court. On the same subject : Rep. Ilhan Omar says she is drawing up articles of impeachment against Trump.

In a 5-4 vote in June, the high court agreed to leave the CDC’s rent moratorium in place until its July 31 expiration. Justice Brett M. Kavanaugh, who voted with the majority, wrote that the CDC overstepped its authority by issuing the moratorium but that the remaining few weeks would allow more time for disbursement of federal rental relief funds.

But he warned that “clear and specific congressional authorization” was needed for the CDC to extend the moratorium further.

The White House said Thursday that President Biden would have supported the CDC extending the moratorium but that “the Supreme Court has made clear that this option is no longer available.”

White House Press Secretary Jen Psaki in a statement said that Biden called on Congress to extend the ban to “protect such vulnerable renters and their families without delay.”

To see also :
U.S. weighs a temporary bombing halt in Afghanistan
American and Taliban negotiators are discussing a pause in U.S. airstrikes and…

What happened in Congress?

Though the high court issued this judgment in June, Congress did not immediately act. See the article : California Gov. Newsom recall election set for September. And on Friday it adjourned without extending the moratorium.

House Speaker Nancy Pelosi (D-San Francisco) in a letter to colleagues on Thursday night called it a “moral imperative” to protect both renters and landlords. Pelosi said she was preparing legislation to direct the CDC to extend the ban through Oct. 18, in line with the federal health emergency.

Other lawmakers said the ban should continue longer. Rep. Maxine Waters (D-Los Angeles) on Thursday introduced legislation to extend the moratorium through Dec. 31.

“Children and families are going to be on the street,” Waters said Friday in a committee hearing.

Rep. Cathy McMorris Rodgers of Washington, the ranking Republican on another panel debating the issue, said Democrats’ efforts were rushed. “This is not the way to legislate,” she said.

On Friday night, Democrats failed to muster enough votes. One lawmaker’s attempt to approve an extension by unanimous consent, without a formal vote, met with a Republican objection.

See the article :
Why George P. Shultz was the best recent secretary of state
When foreign policy scholars list the best secretaries of state of the…

How many will be affected?

The rental eviction crisis has improved since earlier this year for many of the nation’s 44 million renter households. On the same subject : Women of color rise in watershed Boston mayor race.

In January, an estimated 9.4 million households owed a total of more than $52 billion in unpaid rent, late fees and utilities, according to Mark Zandi, an economist at Moody’s Analytics.

As of June, some 5.6 million renters owe a total of $24 billion in back rent, he said, numbers that account for about 13% of all renters.

In a typical year, about 6% of renters are behind on payments, according to the American Housing Survey.

Is there any more federal relief to help renters?

Congress allocated more than $46.6 billion to help landlords and tenants in need of rent relief. But so far, only $3 billion has reached people in need, according to the Treasury Department.

Local and state jurisdictions receive money from the Treasury Department but are responsible for setting up their own allocation systems, slowing the process in many jurisdictions.

The complex web is challenging for landlords who have many properties across many jurisdictions, said David Dworkin, president and chief executive of the National Housing Conference, a Washington nonpartisan advocacy group. They have to effectively navigate these state and local bureaucracies to get assistance, he said.

The complex process is a disincentive for landlords “especially in a market where you can just evict someone and re-rent it,” Dworkin said.

“We need to recognize the interest of landlords and tenants are unusually aligned,” Dworkin said, as tenants want to be able to pay rent and landlords want to be paid.

“Paying the rent is the ultimate answer,” he said.

Connecting tenants with rental relief is challenging even for organizations as robust as Eden Housing.

Linda Mandolini, president of the Bay Area nonprofit, said the organization has helped more than 340 residents request $1.5 million in rental assistance from more than 10 jurisdictions across California.

As of Friday, less than $200,000 had reached fewer than 30 residents. Though the group has “an army of people trained to help residents make applications,” it’s still an uphill battle, Mandolini said. “If you’re a small landlord, it’s much harder to get relief because the processes are confusing,” she said.

In a statement late Friday, Biden urged jurisdictions to disburse emergency rental relief. “There can be no excuse for any state or locality not accelerating funds to landlords and tenants that have been hurt during this pandemic,” he said.

“Every state and local government must get these funds out to ensure we prevent every eviction we can,” Biden said.

A spokesperson for the Department of Housing and Urban Development said that the agency anticipates more households will receive rental relief funds in the coming months but that an uptick in evictions is likely.

Nearly 300,000 households received rental assistance payments in June, according to a HUD spokesperson.

“Our efforts to provide emergency rental assistance will prove meaningless if families are evicted before receiving relief,” Waters said in a statement Thursday.