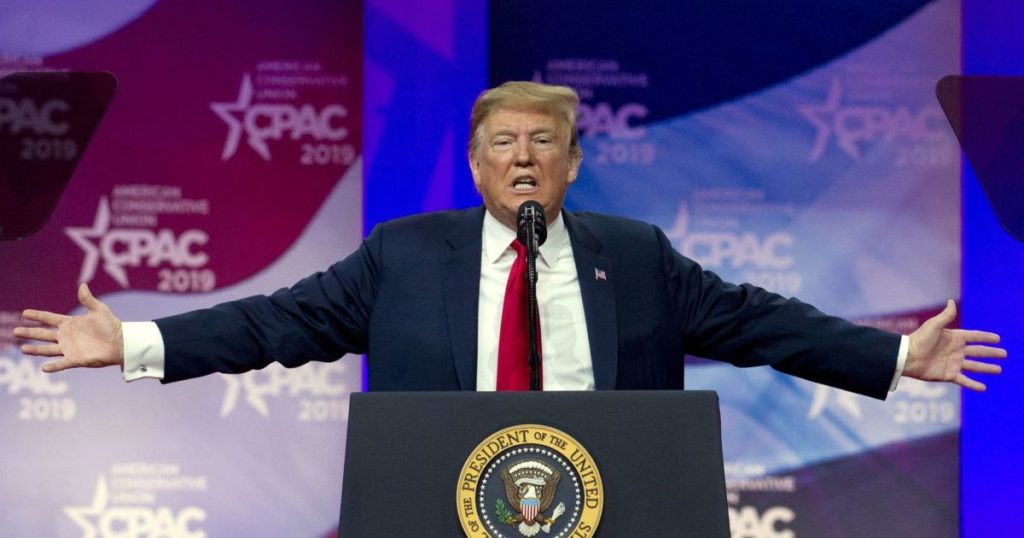 Among GOP elected officials and operatives, intense disagreements rage over the future of their party. But no sign of dissent will be visible this weekend when conservatives gather for an annual conference that has long showcased Republicans’ internal debates.

Instead, one theme will rule them all — fealty to Trump.

The former president plans to use Sunday, the final day of the Conservative Political Action Conference, for his first public speech since leaving the White House just over a month ago. Throughout the weekend, loyalty tests will be everywhere — panels touting Trump’s false claims of election fraud, speeches from Republican hopefuls who will compete to praise him, and a straw poll designed to show him as the favorite for the party’s 2024 presidential nomination.

“He’s not done with politics,” said Matt Schlapp, the American Conservative Union chairman and organizer of the annual conference known as CPAC. “Does he run again? That’s to be determined. But he is going to mess around in the political environment every day of this cycle.”

“CPAC knows what will resonate with its members, and it’s always been the wedge issues that pit the base against Democrats or, in some cases, other Republicans,” he said.

What makes this year’s gathering stand out is the intense focus on an individual and his grievances. Trump’s relative quiet since he left the White House and, almost simultaneously, lost his platform on Twitter has added to the anticipation.

“It sets up perfectly for Trump,” Gorman said. “It’s his coming out party.”

Schlapp, who is in frequent contact with Trump, said the former president was “raring to go.” The annual conference was the scene of some memorable Trump speeches when he was president, including a two-hour epic in 2019 just after his failed summit in Hanoi with North Korean leader Kim Jong Un.

A rundown of the conference’s topic list makes clear its focus:

Protecting Elections Parts 1-4 — “Why We Must Protect Elections”; “Why Judges & Media Refused to Look at the Evidence”; “The Left Pulled the Strings, Covered it Up, and Even Admits It”; and “Failed States (Pennsylvania, Georgia, Nevada, Oh My!)” — will vie with more traditional conservative fare such as attacks on the rising power of China (and California), denunciations of the tech industry, and warnings against Democratic plans to promote low-emission cars, regulate guns and advance the rights of LGBTQ Americans.

“We picked panels that conservatives care about,” Schlapp said. “If the schedule seems Trump-heavy, it’s because the conservative movement and what Trump got done as president converged.”

In all, at least nine sessions will focus on the former president’s unhappiness over the 2020 outcome and try to amplify his false claims to be the rightful winner.

All of that poses a sharp contrast with the last time CPAC convened just after a Democratic president took office, said Republican strategist Alex Conant.

In the winter of 2009, after President Obama’s inauguration, Rush Limbaugh keynoted the conference, exhorting conservatives to pick themselves up and look to the future, Conant said.

For Republicans, an emphasis on relitigating 2020 already has proved costly. As President Biden’s $1.9 trillion COVID relief package steams toward passage, with polls showing a quarter or more of Republican voters supporting it, the party has had difficulty mounting an effective attack, in part because GOP elected officials have spent much of their time attacking each other.

This week, for example, House Republican leaders called a news conference to criticize the bill. It was largely overshadowed when, in response to a reporter’s question, two of the leaders disagreed about whether Trump should speak at CPAC.

“Yes, he should,” said Rep. Kevin McCarthy of Bakersfield, the Republican leader in the House.

“That’s up to CPAC,” she said, but added, “I’ve been clear on my views about President Trump.”

“I don’t believe that he should be playing a role in the future of the party or the country,” she said.

Thursday, in an interview on Fox News, McCarthy criticized Cheney: “The idea that a Republican would join with cancel culture is beyond wrong,” he said.

Needless to say, Cheney will not be appearing at CPAC. Nor will Sen. Mitt Romney of Utah, the 2012 Republican presidential nominee who won the CPAC presidential straw poll that year.

At a conference this week sponsored by the New York Times, Romney said, referring to Trump: “I don’t know if he’s planning to run in 2024 or not, but if he does, I’m pretty sure he would win the nomination.” That would not be his preference, he made clear.

“I would be getting behind somebody in the tiny wing of the Republican Party that I represent.”

Also not on the CPAC agenda are Trump supporters who have failed to meet his threshold for absolute loyalty, including former Vice President Mike Pence and former United Nations Ambassador Nikki Haley. She ran afoul of Trump by criticizing him after his supporters stormed the Capitol on Jan. 6.

“I think he’s lost any sort of political viability he was going to have,” she said in an interview with Politico. “I don’t think he’s going to be in the picture.”

So far, that prediction of Haley’s appears wrong. Republicans had “a mini Arab Spring” in the immediate aftermath of Jan. 6, with many elected officials openly criticizing Trump for stoking his supporters’ anger before the attack and failing to call off the rioters when the violence began, said Charlie Sykes, a prominent conservative radio host from Wisconsin turned Trump critic.

But that faded quickly after Republican voters made clear their continued loyalty to the former president, he said.

“You had this sense that perhaps this was the moment the Republican Party sobered up,” Sykes said. “But it didn’t take.”

The Jan. 6 attack “isn’t going to come up much,” predicted former Rep. Jason Chaffetz, a Utah Republican who is now a Fox News contributor and is scheduled to speak Friday.

People who broke the law on that “horrific day” are being investigated and “should be prosecuted,” Chaffetz said. But he added, “I don’t blame the president for other people breaking the law.”

Rep. Ken Buck (R-Colo.), another CPAC panelist, said the heavy focus on Trump is understandable, but not a sign the party can’t move on.

“I think we’ll move on — with Donald Trump,” he said. “The president has a unifying impact on the base, but whoever is the nominee in 2024 is going to have a job to reach out to others outside the base.”

The conference agenda includes several leading Republicans who all hope to succeed Trump as the party’s presidential nominee — but dare not say so out loud.

Sens. Ted Cruz of Texas, Josh Hawley of Missouri, Tom Cotton of Arkansas and Rick Scott of Florida, as well as the state’s governor, Ron DeSantis, and former Secretary of State Michael R. Pompeo each have prominent speaking slots and probably will laud Trump while avoiding much acknowledgment of the election loss.

That simply reflects the reality of where the party’s voters stand, Chaffetz said.

“I don’t think you can be a successful Republican without embracing the ‘Make America Great Again’ core message into your justification for running for office,” he said.