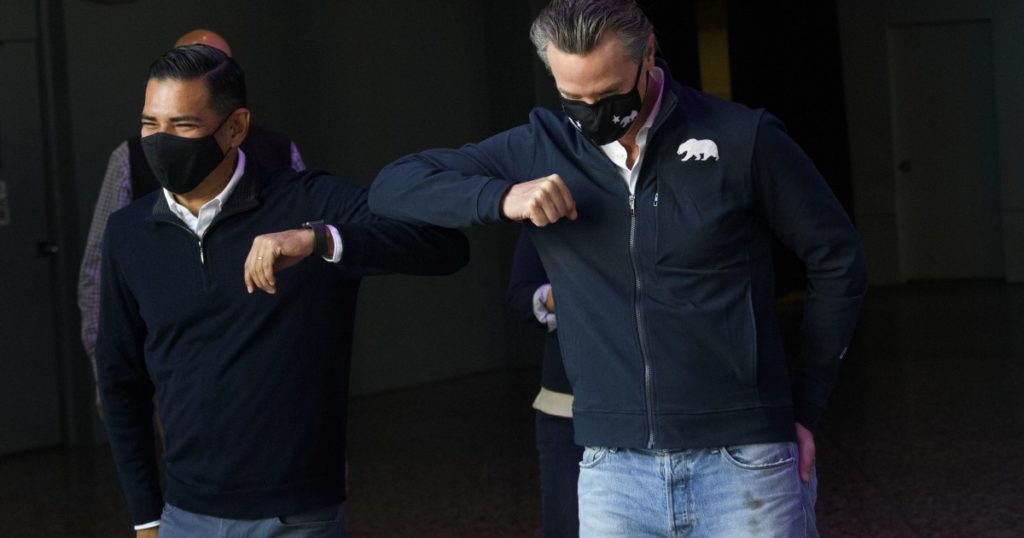 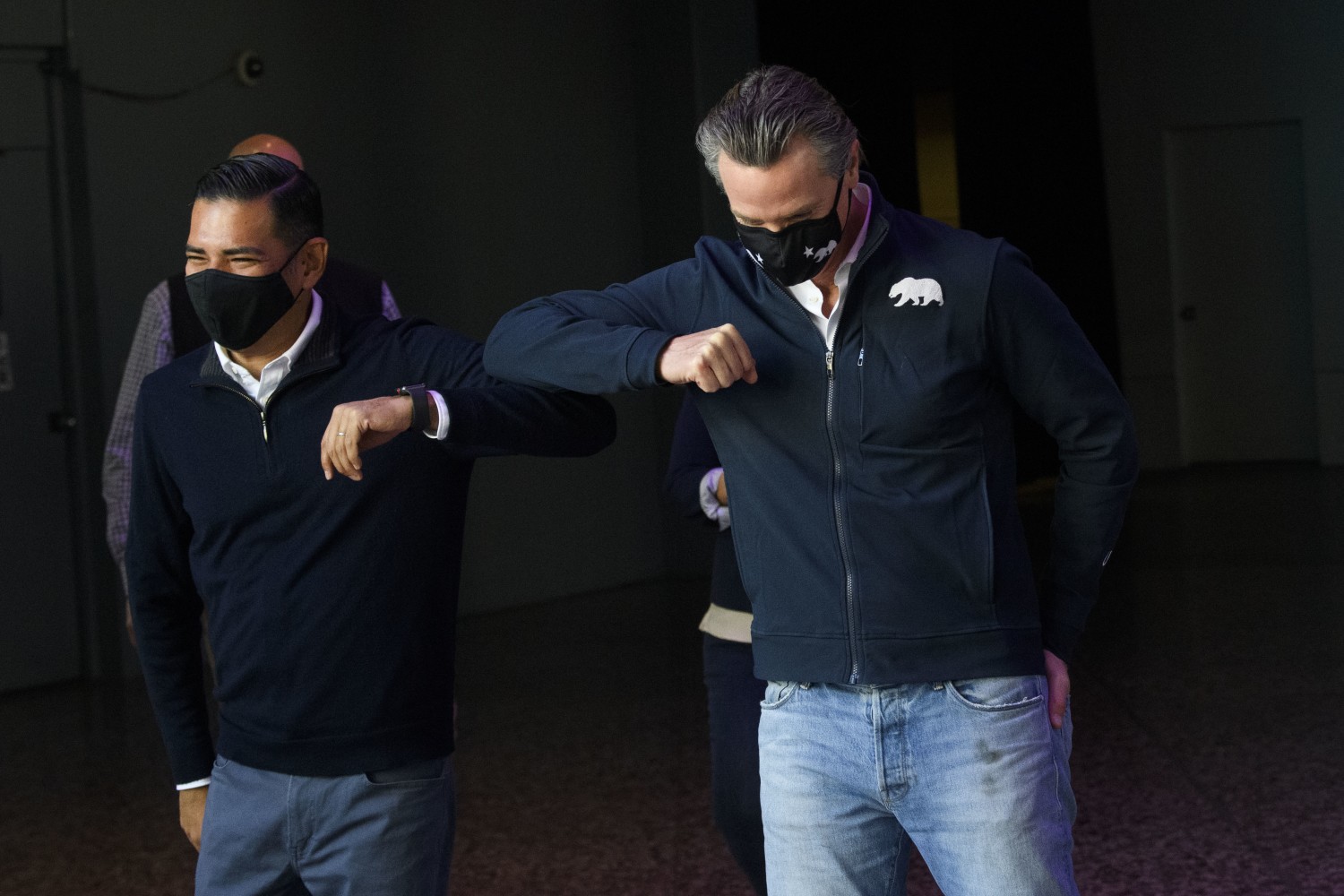 Throughout the course of the COVID-19 pandemic, Gov. Gavin Newsom has often talked about his desire to reopen schools. It wasn’t until the final days of last year, however, that he introduced a plan to speed up a return to the classroom.

Facing the very real possibility of a recall election in the fall, getting children back to class — and stemming growing frustration among parents — has emerged as a top priority for Newsom.

“Parents want to know when their kids can go back to school safely,” said Robin Swanson, a Democratic political consultant, who added that safeguards such as vaccines for teachers and personal protective equipment are important to many parents. “If you lose parents, you lose California.”

Newsom flatly rejects the suggestion that politics have played a role in his pandemic decisions and has not publicly acknowledged the recall effort even as he shifts to campaign-style events in major media markets across the state. But his aides have acknowledged the obvious: Newsom’s chances of beating back the effort would be higher if schools are open and Californians are widely vaccinated before a possible election, allowing fatigued voters to resume their daily lives.

The timing of Newsom’s Dec. 30 announcement of a $2-billion package of incentives to reopen schools — after insisting for weeks that he had provided enough guidance on the matter last summer — was widely interpreted among political observers in Sacramento as a reaction to the recall effort, a possible attempt to appeal to parents as winter break came to a close with no end to distance learning in sight.

The governor unveiled his proposal just one day after news that a $500,000 donation had been made to the GOP campaign working toward a recall election this year. Newsom’s public image had been battered for weeks after he attended a lobbyist’s birthday party at the upscale French Laundry restaurant in Napa Valley despite advising Californians to avoid similar gatherings.

With his plan bogged down in the Legislature, Newsom announced last week that California would reserve a portion of its weekly vaccine supply for teachers and school staff in an attempt to return educators to campus. Even so, the political pressures have continued to mount.

With former San Diego Mayor Kevin Faulconer and 2018 GOP candidate John Cox announcing they would run for governor if the recall qualifies and polls showing a steep decline in Newsom’s approval ratings, the governor launched a tour touting his work on vaccines across the state and invited local reporters to tag along — a marked change in media outreach compared with his many internet-only appearances since the start of the pandemic.

The events, at which fellow Democrats have joined the governor and lavished praise on his handling of the pandemic, have allowed Newsom to campaign against the recall without having to voice his opposition to it.

“No governor has faced a crisis like this one — unexpected, statewide, affecting every Californian, putting unprecedented strain on our healthcare system and lasting now for over a year,” said Assemblyman Robert Rivas (D-Hollister) at Newsom’s news conference in Fresno on Friday. “In other states, you have some governors that haven’t acknowledged the science of COVID-19, have stepped back from the hard work of leadership. Ours did not.

“And Gov. Newsom has led with an unrelenting focus on those groups most affected by this virus, and time after time he has stood up for the most vulnerable here in California.”

But not everyone from the Central Valley has been impressed by the governor. Fresno County Supervisor Ernest “Buddy” Mendes cast Newsom’s more frequent appearances in his region over the last month as politically motivated and driven by the recall effort.

“He never used to come to Fresno, and now all the sudden they are having photo-ops in Fresno,” he said.

Meanwhile, as Newsom navigates the complex web of pandemic and recall politics, the governor is finding himself caught between the labor unions that helped him ascend to power and the public pressure he has to respond to in order to retain it.

The new urgency to reopen more schools created an awkward situation with some of Newsom’s most loyal supporters: the unions representing teachers and other school employees who want to prioritize and enforce safety for their members over a quick return.

This week, Faulconer latched on to Newsom’s earlier sluggishness in reopening schools as evidence of his acquiescence to teachers at the expense of children and families.

“Gavin Newsom has waited too long to clean up this mess and our kids will be living with his mistakes into adulthood,” he said. “He left the union holding all the cards and he wasn’t willing to hold them accountable.”

The California Teachers Assn. and other school groups pushed back on the governor’s plan to reopen schools as early as Feb. 15 — a date that came and went without any action. The proposal did not align with the union’s calls to vaccinate school staff before they return to work in-person, and teachers wanted additional safety measures.

As the Legislature negotiated with the governor over the availability of vaccines for educators and whether to incentivize reopening in the areas hit hardest by the virus, the CTA launched a $1-million television ad buy Feb. 13 that argued that opening schools without prioritizing safety — including vaccines for educators — would only worsen the spread of the coronavirus.

The union says the ads, which were careful not to mention the governor, were in line with earlier digital advertisements that attempted to get its point across and combat growing resentment toward educators.

At a news conference last week, Newsom said he had a great relationship with the teachers union, “but people can disagree.”

Despite publicly disagreeing with the union’s position that school employees should have access to the vaccine before returning in person, Newsom said Feb. 19 that the state would offer up to 75,000 vaccines each week for staff heading back to the classroom, an announcement seen as an attempt to help placate teachers and staff and facilitate a deal with the Legislature on reopening schools amid mounting pressure from parents.

The battle with the teachers union is just the latest episode in Newsom’s on-and-off-again relationship with organized labor.

His surprise Jan. 13 announcement that the state’s vaccine distribution rules were changing to prioritize those 65 and older dealt a blow to unions representing janitors, security guards and other essential workers who lost their place in line. Early in the pandemic, unions made repeated calls for the state to address basic needs, such as inadequate supplies of personal protective equipment in the workplace. Demands to extend COVID-19 paid sick leave have also gone unanswered.

At its executive council meeting last week, the California Labor Federation, an umbrella group for 1,200 unions in the state, tabled a motion to publicly oppose the recall effort. Leaders of many of the state’s largest unions weren’t expecting to vote on the issue when someone made an impromptu motion to take it up.

Labor sources cited different reasons for why the council balked, with some questioning whether taking a stance would validate the recall campaign against the governor before it qualifies. Some said the lack of action spoke to the tensions between the governor’s office and labor unions and a hesitancy to publicly back him at a time when so many rank-and-file union members are frustrated.

There’s little doubt that the federation and individual labor unions will eventually oppose the recall, but many are weighing just how much support to throw behind Newsom.

The 20,000-member National Union of Health Care Workers is already stepping up to back the governor. The union launched a $100,000 ad buy in an attempt to convince voters on the left that the state’s progressive agenda would go down with Newsom if he’s recalled.

Jim Araby, who previously led UFCW Western States Council and now directs strategic campaigns for UFCW Local 5, said unions need the governor as much as he needs them.

“I believe the governor needs labor to win,” Araby said. “There’s some natural tension there, but at the end of the day for us, for our union, we know we have a person in the governor’s office that will listen to our concerns and will discuss and negotiate with us to get to a deal that we can always continue to build on. If he gets recalled, that ain’t gonna happen.”

With unions unlikely to support Newsom’s Republican opponents, some political consultants say it’s unclear why Newsom doesn’t push harder to reopen schools immediately. Parents are among the most important populations to court in California politics because of their tendency to be high-turnout voters. Though not all parents believe schools should open immediately, some who do are becoming more vocal.

Open Schools California, an advocacy group for parents of California schoolchildren, is calling for the governor and lawmakers to open schools now.

“Parents are incredibly frustrated,” said Megan Bacigalupi, an advocate for the group and parent of two children in the Oakland Unified School District. “We’re approaching the one-year mark of kids being out of school. We look to our leaders in Sacramento for their leadership but also to act expeditiously when it’s obvious what the right thing is to do, and the right thing to do right now is to reopen schools as quickly as possible.”