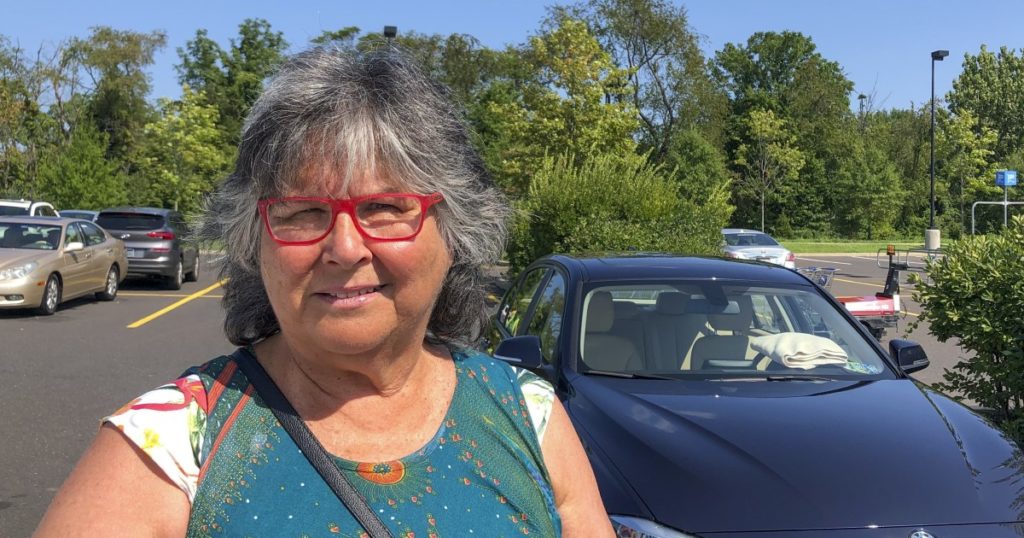 Susan Giffen, a Democratic voter who lives in one of the nation’s most important political swing districts, said Vice President Kamala Harris is savvy, asks perceptive questions and would make a good president.

But Giffen, a 69-year-old retiree from New Hope, Pa., believes it will never happen.

“Absolutely not,” she said while running errands before an afternoon swim. “I’d vote for her. But I don’t think she can win. And I wouldn’t vote for her in a primary.”

Giffen worries Harris’ political growth has been stymied by a series of no-win assignments from President Biden and that Harris cannot overcome the country’s sexism.

That perception illustrates one of many early problems Harris faces. She is unlike any vice president who served before her — not just because she is a Black woman of South Asian ancestry — but also because she faces immense expectations that she is the favorite to replace Biden, who at 78 is the oldest president ever to serve.

Interviews in downtown plazas and suburban strip malls with more than two dozen voters in Philadelphia and Bucks County, Pa. — two essential places in the Democratic Party electoral map — illuminate Harris’ struggles in public opinion polls. All of the interviews were conducted during the messy withdrawal from Afghanistan but before the terrorist attack that killed 13 American service members and scores of Afghans.

Some of Harris’ challenges, including the perception that she is not a central player in the administration, have bedeviled her predecessors to varying degrees, given that the No. 2 job requires deference. Others are unique to the nation’s first female vice president: Two men told a reporter outright that a woman should never be president; a third said she “cackles” too much; a fourth called her “a joke,” who was put in her job as “a trophy.”

It’s impossible to quantify how many of Harris’ political struggles are the result of racism and sexism — both blatant and subtle — and how many stem from her actions and personal qualities. She has made political mistakes and is in office in an era of hyper-partisanship, when few politicians have attracted large majorities of national support.

Polls show she is faring far worse than three of her four most recent predecessors at this point in their tenures, and only slightly better than the fourth, Vice President Mike Pence, who served a uniquely unpopular president, according to a Times analysis of polling data. On average, Harris is viewed negatively by 49% of voters, compared with 43% who see her in a positive light, about 10 percentage points worse than Biden’s favorability numbers.

White House officials have gone out of their way to promote the “Biden-Harris administration,” a signal that they are a team and a reminder of the big bet the Democratic Party is placing on Harris’ success. But the interviews with voters suggest many are not giving Harris credit for Biden administration accomplishments, even as the president has her join him at speeches and meetings and repeats often that she is the last person in the room when he makes major decisions.

“I can’t think anything of her because she hasn’t done anything,” said Adam Osborn, a 45-year-old Trump supporter who works in the advertising sign industry. “She’s not in the news in a way that portrays her positively, and she’s not in the news period. She’s in the shadows of the administration.”

Another Trump voter called her “nonexistent.”

“I’ll give Biden credit for the things Biden’s done,” said Popsy Robinson, a 71-year-old Biden voter, when asked whether he believes Harris deserves to share in the president’s achievements. “Biden’s been around a long time.”

It’s not just critics or people who get news from conservative sources who see Harris as a background player.

“She’s been mostly behind the curtains,” said Dan Copes, a 49-year-old Democrat who was at Philadelphia City Hall buying property this week.

Copes has followed Harris’ policy portfolio closely, including her job discouraging migration from Central America and leading the administration‘s fight against Republicans’ push for restrictive voting laws. But Copes, who cares deeply about voting rights, sees Harris’ overall performance as average, in part because he has yet to see results.

Both problems are particularly thorny. Efforts to attack what the administration calls the “root causes” of migration from Central America — including poverty, corruption and drug cartel violence — may be years away, and the number of people arriving at the border has hit highs not seen in decades. Democratic efforts to pass a national voting rights law have stalled amid Republican opposition.

When a problem emerges, Biden hands it to Harris to reassure critics that he is taking it seriously, Copes argued. That has left her with little focus and little sense that she has chosen her own platform, he said.

“She needs to come out of that shell,” he said.

The good news for Harris amid the negative poll numbers is that some voters say they simply don’t know enough about her and are willing to give her a chance. Some Democrats who worry about her say they believe she is being ill-served.

She’s very smart. She knows what she’s doing. But she probably needs someone to coach her.

“She’s got her act together, but sometimes when she says things, it comes across a bit abrasive and maybe too aggressive,” said Edwina Thompson, an administrative assistant who did not want to give her age.

Thompson, a Black woman, does not believe a white male politician would be judged as harshly, but sees it as a reality, and thinks Harris needs more help navigating it.

“That is a stereotype that this country has about Black women and I think it freaks out white people. So if she attacks anybody, it is blown out of proportion,” she said, walking to work in downtown Philadelphia. “She’s very smart. She knows what she’s doing. But she probably needs someone to coach her.”

Many voters say they simply don’t have the time to pay close attention to a vice president, even one with a relatively high profile. Erica Wilkins, a 30-year-old patient care assistant, was at City Hall getting copies of birth certificates for her two children, ages 6 and 4, last week.

Wilkins is more concerned with the guns and violence in her neighborhood than national political figures. She just moved out of one neighborhood where “we couldn’t even sit on our steps,” to a new one that is not much safer, she said. Her only solace is that the staff at the nearby park has kept the violent actors out.

“I don’t hear that much about her,” Wilkins said of Harris. “I will say I am proud of her as a woman.”

“It takes time to prove yourself,” he said. “You know what? I didn’t like everything that Biden did either” when he was vice president.

Harris’ descent in the polls began in June, after she traveled to Guatemala and Mexico. During a nationally televised interview, she appeared to give a flip answer when asked repeatedly why she had not yet gone to the U.S.-Mexico border. She has since gone.

Harris has been unable to recover from the few public comments that have drawn controversy because she tends not to draw attention for work on less divisive topics. Few voters mentioned her trip to Singapore and Vietnam last week, for example, which made little news back home as Biden coped with the withdrawal from Afghanistan.

And even as she tends not to benefit from Biden’s ups, she appears to be affected by his recent decline during the Afghanistan pullout and the resurgence of COVID-19, which has undermined the administration’s sense of calm competence.

An NBC poll released last week and taken before the troop deaths showed more people hold “very negative” views of Harris — 36% — than any of her predecessors. That’s in part the result of relentless attacks from Fox News and other conservative media and a more polarized political environment.

It’s also increasingly hard to argue against the role her race and gender play.

Thomas Campell, a white 58-year-old contractor who stopped by Walmart in Warrington to pick up some ice cream, made no bones about telling a reporter, “I don’t know if a woman should be in the main office” because “I don’t know if they have the sack” to confront foreign leaders.

“If she could do the job, I’d wish her the best,” he added, when asked about the double standard.

Mark St. Bernard, a 38-year-old social worker, who is Black, said, “it’s awesome that we have a Black vice president” and that it “could be a good thing” to have a female president.

“But the Bible says, you know, the man is in charge, and I think that’s where, you know, I just don’t feel like a woman should be the president,” said St. Bernard, who said he does not vote in presidential elections.

He cited other unfounded stereotypes about emotional stability before shifting his reasoning.

Other countries “won’t respect America if we have a female,” he said. “We kind of put our women equal. It should be like that in the world but, in Afghanistan [and] Russia, they don’t, they still — primitive thinking, I guess.”