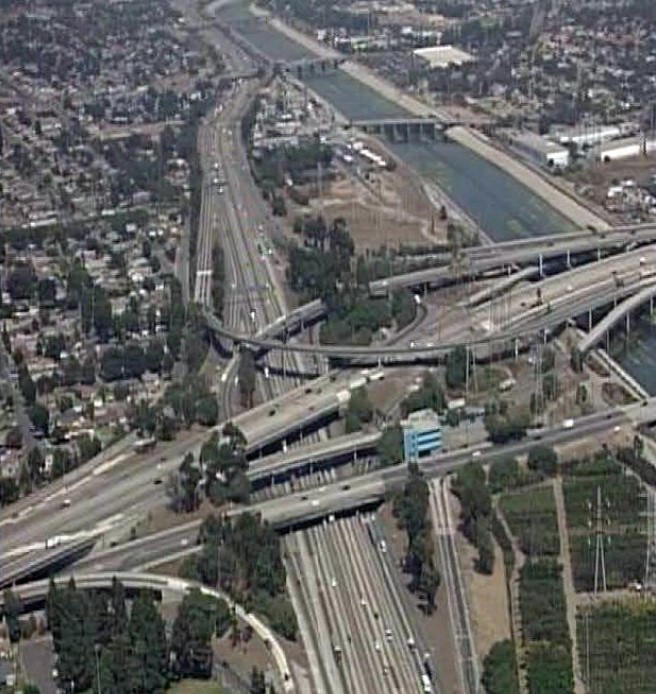 Dealing a blow to Metro’s effort to fast-track expansion of the lower 710 Freeway, the federal Environmental Protection Agency (EPA) has mandated that Metro follow air quality laws. The EPA is insisting that Metro further study air quality impacts and the steps Metro would need to take to mitigate them.

East Yard Communities for Environmental Justice (EYCEJ) Co-Executive Director Laura Cortez welcomed the EPA’s mandate, stating that it provides an opportunity for Metro to rethink the proposed project. Cortez asserts that Metro, “instead of shoving a 20-year-old irrelevant project down our throats,” should commit to a true “zero emissions only” project “that cleans the air and does not demolish homes.”

EYCEJ is part of the Coalition for Environmental Health and Justice (CEHAJ) which has long insisted that the project meet three community asks: a zero-emissions corridor without lane widening, local hire, and no displacement. The coalition has supported project alternatives that would construct a second deck – for zero-emission freight – while keeping the project footprint within the existing freeway right-of-way.

Not to be confused with the canceled North 710 Freeway tunnel, Metro and Caltrans’ lower 710 expansion – called the I-710 Corridor Project – would widen about 19 miles of the freeway, from just east of downtown L.A. to the ports of Los Angeles and Long Beach.

For more than a decade, Metro and Caltrans have been making plans to widen this part of the 710 Freeway. According to a January 2021 Metro presentation, Metro completed its initial study of the corridor in 2005. Metro circulated its first draft 710 Freeway Corridor Project Environmental Impact Report (DEIR) in 2012, then proceeded to release revised versions of its DEIR in 2013 and 2017 – with another revised/supplemental DEIR expected to be circulated this summer.

In 2018, the Metro board approved a locally preferred alternative (Alternative 5C) which would spend an estimated $6 billion to add two more general purpose lanes. The approval was contentious, with environmental justice and public health community groups, led by CEHAJ, strongly opposing the expansion, which would demolish neighborhoods and worsen air pollution in an already heavily polluted corridor.

Metro did not then have (and does not now have) the funding for the entire $6 billion project, so the board directed staff to only proceed with about $1.2 billion worth of an “early action program.”

Before Metro highway builders can proceed with early components, the Metro board still has to approve the project’s DEIR – to convert it from draft to final (FEIR).

To finish the EIR, federal laws and rules require Metro to do a thorough analysis of the project’s impacts to air quality. For already-polluted areas, Metro is required to do what is called a particulate matter (PM) hot spot conformity analysis. Instead of actually thoroughly studying the expansion’s air pollution impacts, Metro tried to do an end run around the requirement. Metro trotted out a vague Clean Truck Initiative program, and then asked the EPA to consider whether that program could get Metro off the hook with regard to required air quality studies.

In a March letter, the EPA responded to Metro essentially saying “No – it doesn’t work that way. Do the required analysis.” From the EPA letter:

The EPA recognizes the collective challenges to protecting human health while delivering transportation projects within the I-710 Corridor, an area with communities already overburdened by existing goods movement and industry in an area with the worst air quality in the United States, including some of the highest PM2.5 levels in the country. After thoughtful consideration, multiple interagency meetings, and good faith efforts by EPA, Caltrans and Metro to identify a potential alternative path forward for the analysis of project-level transportation conformity, the EPA ultimately concludes that a PM hot-spot analysis is necessary for the project’s transportation conformity determination. …

The letter states that the EPA is “very supportive of using zero emissions truck technology on the I-710 freight corridor” but expresses skepticism of Metro’s clean truck proposal: “We [the EPA] expect increases in the severity of existing [air quality] violations even if the proposed I-710 Clean Truck Program were to be fully implemented given dust, tire wear and brake wear.” Further, the EPA states that Metro and Caltrans have not yet actually made an “enforceable commitment” to the program. So far, Metro has allocated only $50 million to its clean truck initiative that, in 2018, was expected to cost $200 million. Metro is hosting meetings to define the initiative (meetings swarmed by non-zero-emission interests pushing for their “near-zero” fossil fuel modes to get a piece of the clean truck pie), but has yet to actually finalize what the program will entail or to quantify its expected air quality benefits.

EPA states that it communicated its concerns to Metro in a November meeting. As of the January community update meeting, Metro was still announcing its plans to “finalize air quality conformity agreements” by “early Spring 2021” so its new EIR would be circulated in Summer 2021 for a 30-day public comment window. Metro’s anticipated schedule called for its board to approve the EIR (called a Record of Decision/Notice of Determination) this Fall.

Not following environmental regulations would leave Metro open to lawsuits which could further delay the project.

Cortez states that the EPA letter confirms what “we’ve always known” – that the full air quality analysis is necessary and that “there is no possibility of this project moving forward in this way.” Cortez invites Metro to start over, engage communities, and work together to craft a new zero-emissions 710 project that genuinely centers health.