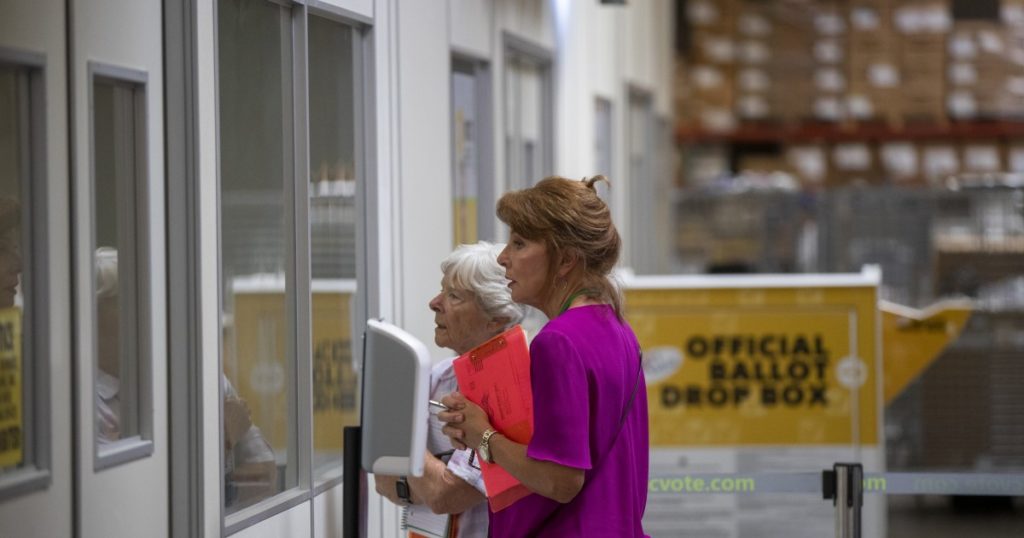 The recall vote-counting has yet to begin, but election officials already are experiencing surveillance befitting a spy novel.

In Seal Beach, election workers arrive to pick up ballots from a county drop box outside of Leisure World and, no matter what time of day they make their rounds, are invariably met by a man who pops out to take their picture. Other election workers report individuals photographing their license plates. At ballot processing centers, volunteer observers keep a close eye on those approving the signatures on unopened ballots — and sometimes are challenging the validity of the signatures, a practice that is banned in some counties and has been declared illegal by at least one judge.

Election watch campaigns are running full force as California nears the Tuesday close of the gubernatorial recall election, only slightly toned down from the suspicion and accusations that dogged the November presidential contest as they collect what they say is fodder for future court challenges and political campaigns.

In some cases, election chiefs are pushing back, debunking false rumors they might have ignored in the past or shutting down voter signature challenges they say were abused — marking new battle lines in the nation’s political misinformation war.

“I still try to be diplomatic. But I’m at the point where I say, ‘Enough,’” said Orange County Registrar Neal Kelley, whose duties Thursday included dealing with an agitated volunteer election watcher upset that election staffers were approving voter signatures he believed should be rejected. “This needs to be called out. … It’s just gotten absurd.”

The organization, which grew out of the Tea Party movement, says it has trained some 4,000 observers to police the recall, including 300 in Los Angeles County, though reports suggest the numbers of observers showing up so far are a fraction of that. Still, some registrars are concerned the group’s claims about problems with mailed ballots will discouraging people from voting and undermine confidence in the election process.

The state Republican Party has launched its own election fraud program, as have leaders of several conservative political action committees. They are competing for the attention and donations of a common conservative base. In that close environment, Election Integrity Project requires its volunteers sign a form agreeing to not share what they see with other election watch groups.

All of the groups are asking Californians to send them ballots that arrive at their homes addressed to strangers or dead relatives. Election Integrity Project has said it wants the records for its litigation against the state, now on appeal in federal court, seeking a court order to audit voter signatures. The other groups have not said what they intend to do with the information.

These solicitations upset Renee Jubian when she saw them on her local Nextdoor social media platform alongside a photograph of a ballot mailing that had been damaged. The Ventura County resident took to the platform to tell neighbors that bad ballots ought to be reported to election officials — as requested on the exterior of the envelopes. Election offices rely in part on returned mail to keep voter rolls up to date.

Jubian also succeeded in persuading Nextdoor to remove the posting, contending it was misleading, but it returned anew the next day and triggered a heated neighborhood exchange.

“They’re trying to sow doubt in people who aren’t well informed about the integrity of voting,” said Jubian, 64, and a self-described “proud Democrat.”

Doubt over the election process drove one San Diego resident, who did not want to be named because of concern for her personal privacy, to volunteer as an Election Integrity Project observer.

“I’ve been increasingly frustrated when people say, ‘What’s the point in voting?’ because people don’t believe in the integrity of the process,” she said. She harbored her own concerns, given the “iffy” things she said she had heard about how voter signatures are verified or damaged ballots remade so they can be read by machines.

After a week of watching election workers, she said, “I’ve been absolutely astounded. … I think if people realized how much effort goes into making sure it is a good ballot, that is very impressive to me.”

Minutes after the interview, Election Integrity Project sent out an alert telling its volunteers to not speak to The Times: “‘NO COMMENT’ is the ONLY thing they should say if contacted!!!”

Election Integrity also sought to distance itself from a volunteer who angrily confronted Orange County election officials over voter signatures. The organization told members it had been “used” by a volunteer for a Republican recall candidate. The man’s social media pages, however, showed only that he supported the recall and believed that its failure would itself be proof of “MASSIVE CHEATING.”

It is unclear whether the people taking photographs of Orange County election workers are affiliated with a particular group, but Kelley, the county’s registrar, said there was no valid reason for doing so and that the actions were the product of unmerited suspicion.

Until now, election observers would have been allowed to challenge ballots in Orange County by flagging the voter signature on the outside envelopes. But following a recent Times investigation raising questions about the legality of such challenges, Kelley decided to stop the practice. Last year, a judge in Ventura County said in a ruling that observers are not legally allowed to challenge signatures on ballots.

Kelley said he saw observers in the past decide which ballots to challenge based on voter surnames and other demographics that allowed them to guess a voter’s leanings. Secretary of State guidelines for the recall election tell counties that observers are prohibited from challenging voters, but the document is silent on whether that includes the validation of a voter’s signature.

Los Angeles County already barred signature challenges, but other counties, such as San Luis Obispo and San Diego, do not. As of Thursday, the San Diego registrar’s office reported some 50 ballots were challenged but none of the challenges were upheld.

Election Integrity Project officials did not respond to requests to comment. The organization previously contended it does not train observers to challenge voter signatures, though logs kept by its volunteers showed such challenges were a prime focus.

The organization has a pattern of misrepresenting data gleaned from state voter rolls. Most recently it asserted noncitizen voters were being hidden because thousands of people had changed their birthplace from foreign countries to California during record updates. Election Integrity Project failed to note the many other voters who updated their records to add foreign places of birth, or that birthplace — as opposed to citizenship — is immaterial to the right to vote.

Election Integrity Project’s president, Linda Paine, has proclaimed that California is part of a socialist conspiracy and asserts that election outcomes are secretly decided. “They always lose by 60-40, or 70-30. It’s always the same thing. It’s an algorithm. That’s been proven,” she told the Costa Mesa Republican Assembly in late July, according to a recording of the presentation.

Paine and her organization currently advocate against voting in the recall election by mail, though that is the chief means of voting for most Californians. The organization claims without foundation that mailed ballots are ripe for fraud and manipulation.

Election officials contacted by The Times universally refuted that.

“Voting by mail is a trusted, secure, and safe voting option for all registered voters in Los Angeles County,” Registrar Dean Logan’s office said. “The claims made by the Election Integrity Project disregard and misrepresent those safeguards. As a result, their messaging could be confusing to voters and discourage participation.”

Nevada County election officials were blunt, calling Election Integrity’s warnings “a deliberate effort to scare voters” and “based on unfounded conspiracies and hyperbole.”

“What [Election Integrity Project] is saying is that we, nonpartisan election officials sworn to protect the vote, are cheating. I can tell you emphatically that’s a bold faced and careless lie. That kind of rhetoric is absolutely false, dangerous, and puts election officials in harm’s way,” Assistant Registrar Natalie Adona wrote to The Times.

Before the November presidential election, California’s Secretary of State quietly ran a campaign asking social media companies, such as Facebook and Instagram, to censor accounts the state agency deemed to damage voter trust, according to documents obtained by The Times under the state’s open records law.

The state agency said it disbanded the program after November and no longer seeks removal of social media posts. Nevertheless, spokesman Joe Kocurek said, “our office remains concerned about election misinformation and the possibility to erode confidence in our elections.”

Some county registrars have begun to tackle election myths themselves. Sacramento County issued public announcements debunking false rumors on social media, including that a county election worker was employed by Dominion Software and that holes on ballot envelopes made it possible to tell how a person voted (in some counties, it was possible to see a voter’s choice if the ballot was folded and inserted a certain way).

The current spate of election watch energy is bound to matter less in the recall than in court cases and political campaigns to come.

The California GOP launched its election watch program last week under the guidance of Randy Berholtz, the party’s secretary who has strong ties with Election Integrity Project. Election fraud accusations are a central theme for former Trump ambassador and right wing firebrand Ric Grenell, who has made expansive document requests to more than half the state’s county election offices, seeking records of noncitizen, nonresident or deceased voters.

The Washington, D.C., law firm representing Grenell has a long history of advocating for Republican causes, taking Nevada to court with accusations it fails to police voter rolls for noncitizens and defending Florida’s efforts to keep felons from voting until they settle their court debts.

Carl DeMaio, a Republican former San Diego councilman who runs a political action committee recruiting volunteers to go door-to-door to garner support for the recall, is asking supporters to send in misdirected ballots along with the voter names on that mail. DeMaio’s ballot collection drive is through a nonprofit organization he and a campaign aide created in February.

He has not said what he intends to do with the ballots, beyond displaying them on the organization’s social media accounts. Phone and email messages to DeMaio’s organization were not returned.