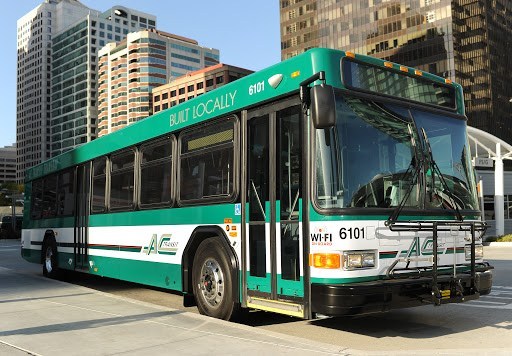 Advocates are gearing up a campaign to push for quick-build, pandemic, bus-only lanes and other transit enhancements installed in Oakland, Berkeley, Alameda, and other East Bay Cities. “If we don’t address fears around public transit in terms of COVID safety and there’s no competitive advantage to riding the bus, people will get back in their cars and there will be a congestion nightmare,” explained the East Bay Transit Riders Union’s Derek Sagehorn. “We need to be proactive.”

The plan, which will involve Sagehorn’s group, Transport Oakland, and others, is to encourage cities to take advantage of SB 288, which exempts bike and bus improvements from “environmental” review. It went into effect on Jan. 1. Bike East Bay is also involved, to make sure bikes are accommodated whenever possible. “We have met with AC Transit staff to have initial conversations,” confirmed Bike East Bay’s Dave Campbell.

Last September staff at AC Transit gave a short presentation on routes that could benefit from quick-build bus-boarding islands, bus-only lanes, and other enhancements. From their report:

There is growing interest nationally to quickly designate slow streets and build bicycle lanes, pedestrian improvements, and even outdoor dining areas as a response to COVID-19 – to provide space for social distancing and better safety and comfort for the booming number of cyclists. In some larger cities, transit improvements have also been a key part of the response. For example, the New York MTA is proposing 60 miles of bus lanes as part of their COVID response.

Although there is rampant speculation on what the post-COVID public transit world will look like, early indications are that traffic conditions will worsen before transit ridership bounces back and that steps should be taken now to protect transit travel time. The quick-build concept is intended to help the District meet this immediate challenge and reach long-term goals.

The report contains a matrix of potential corridors, including MLK, MacArthur, and Foothill. However, unlike SFMTA and transit operators in other regions, AC Transit has no direct control over the streets on which it operates. The agency has only one line currently with a dedicated lane throughout most of its run, the “Tempo” Bus Rapid Transit between San Leandro BART and Uptown Oakland. “Because Tempo operates in a bus-only lane, our rider’s commute time… has reduced, and we are confident that with changes in motorist behavior, efficiency will increase,” said AC Transit spokesperson Robert Lyles. “Once social distancing restrictions loosen, we will also be able to transport more riders along this corridor.

Sagehorn argues that quick-build “pandemic lanes” could quickly and cheaply bring other lines close to Tempo’s standard. However, he fears it will be a heavy lift to get some cities on board. “Transport Oakland, SPUR and East Bay Transit riders are sending a letter to the different cities in Contra Costa and Alameda, explaining that AC Transit has this great framework, and they can really realize benefits for transit riders… they just need to decide to do it.” He fears Berkeley could be challenging, given its past resistance to extending BRT projects through the city. In addition, AC Transit has opted not to include bus lines that run on state-run highways in its framework, given the State Department of Transportation’s history of sabotaging bus, bike, or pedestrian improvements.

That said, Sagehorn and the other advocate groups already have allies on the other side of the dais. He expects Oakland to support AC Transit’s initiative, given its innovative “slow streets” and “flex streets” initiatives.

“There is an existing, unmet need to streamline the construction of transit infrastructure that prioritizes regional connectivity, such as BRT. I’m very happy to see AC Transit developing strategies in pursuit of that vision and stand ready to support these efforts,” wrote Emeryville Councilmember John J. Bauters, in an email to Streetsblog. “The City of Emeryville is interested in realizing the potential of San Pablo Avenue and 40th Streets as true multi-modal corridors, including BRT on San Pablo Avenue and transit-only lanes on 40th Street. We will continue our strong partnership with AC Transit to pursue funding that can make this shared vision a reality for the east bay.”