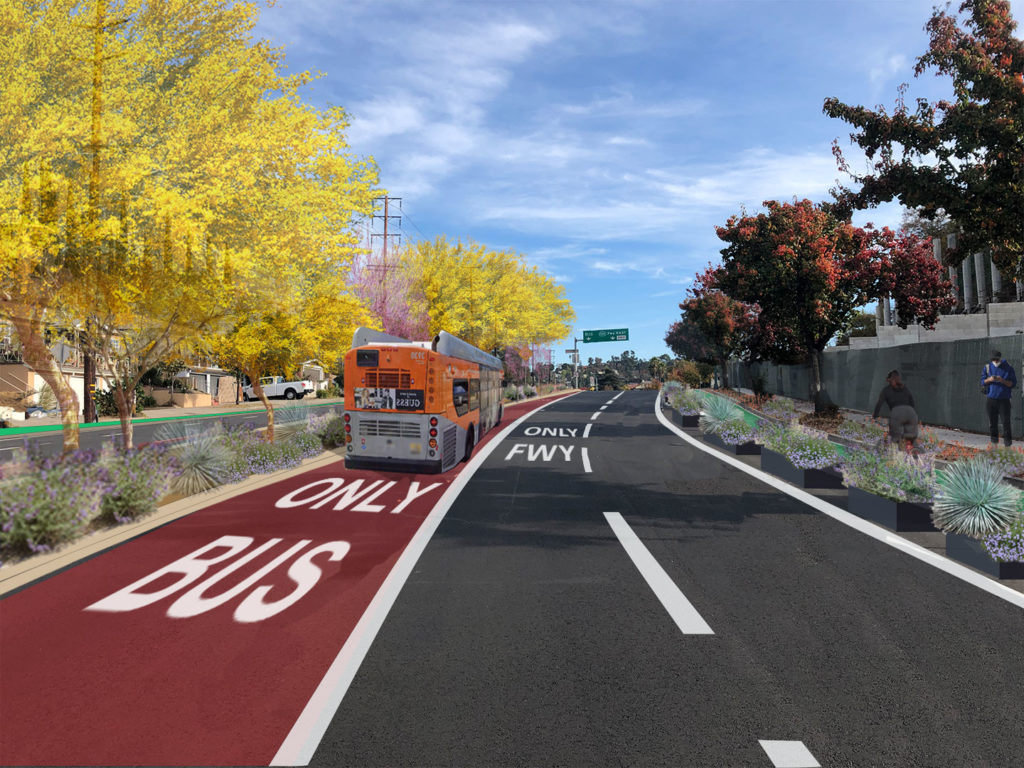 Earlier this week, Equitable Eagle Rock posted an alert urging folks to email Los Angeles City Councilmember Kevin de León and ask him to “support the Eagle Rock community by supporting the Beautiful Boulevard proposal.” Metro’s version of Beautiful Boulevard is expected to come before the Metro board for approval later this month.

The Beautiful Boulevard proposal is a community-led effort to make sure that implementing Metro’s planned Bus Rapid Transit (BRT) project will support a transit-friendly, bikeable, walkable corridor on Colorado Boulevard through downtown Eagle Rock. Eagle Rock is a key segment in Metro’s planned ~18-mile North Hollywood-to-Pasadena Transit Corridor project. The planning process for the BRT project has been bogged down by controversy. Supporters have pressed hard for a robust project to serve workers, students, and other low-income transit riders. Opponents have engaged in Trump-like rhetoric to keep transit improvements out of their backyard.

Beautiful Boulevard retooled Metro’s one-size-fits-all designs to come up with a plan that meets the neighborhood’s goals of preserving current medians, sidewalks, and bike lanes. To make this work, Beautiful Boulevard maintains travel lanes near freeway entrances and where vehicle use is higher, but reallocates space, converting one car lane in each direction to instead serve transit (and emergency vehicles) within Eagle Rock’s walkable commercial core.

Beautiful Boulevard has the support of a broad array of Eagle Rock leadership. It has been endorsed by elected officials representing the area: County Supervisor Hilda Solis, State Assemblymembers Wendy Carrillo and Laura Friedman, and LAUSD Board Member Jackie Goldberg. It is also supported by dozens of businesses, institutions, and community groups, from Occidental College to Oinkster.

Metro’s project design team incorporated a slightly-watered-down version of Beautiful Boulevard in the BRT project alternatives. In April, Metro hosted a public meeting to receive input on their revised proposal. Public comment was more in favor of Beautiful Boulevard than opposed, though many Eagle Rock NIMBY speakers continue nativist opposition to prioritizing transit where they are accustomed to driving.

As a state legislator, de León was a key leader in California’s work to fight the climate emergency. He often courageously stood up to big oil interests – and ensured that the state’s climate programs improved the health and well-being of disadvantaged communities. When campaigning for city council, he touted his environmentalism. He pledged to make “zero-emission transportation available to every single family,” to “work tirelessly” for safe streets, and to fight “for investment in local, public transportation projects that take Angelenos where they need to go.” He was elected last year.

Readers interested in making their voice heard can still weigh in via Equitable Eagle Rock’s alert.