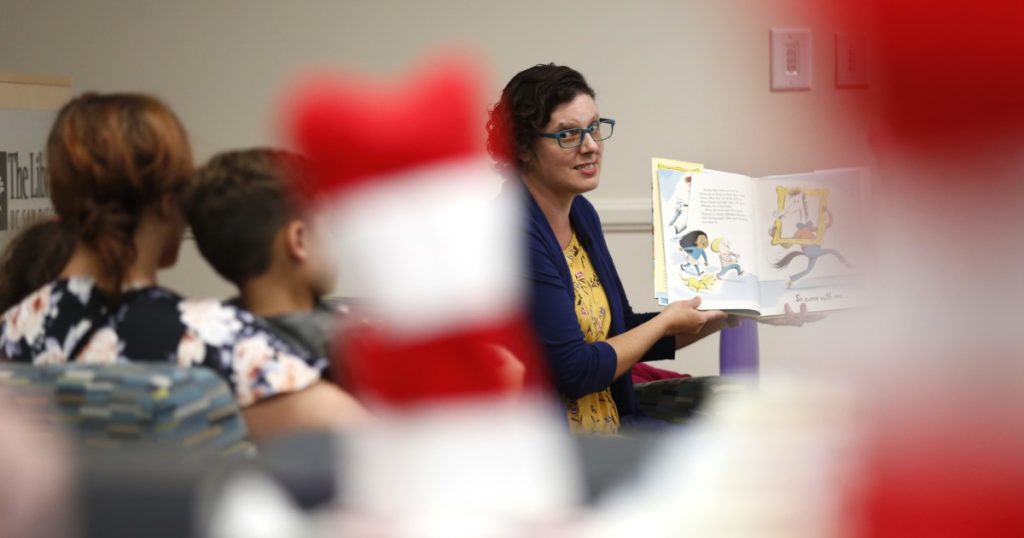 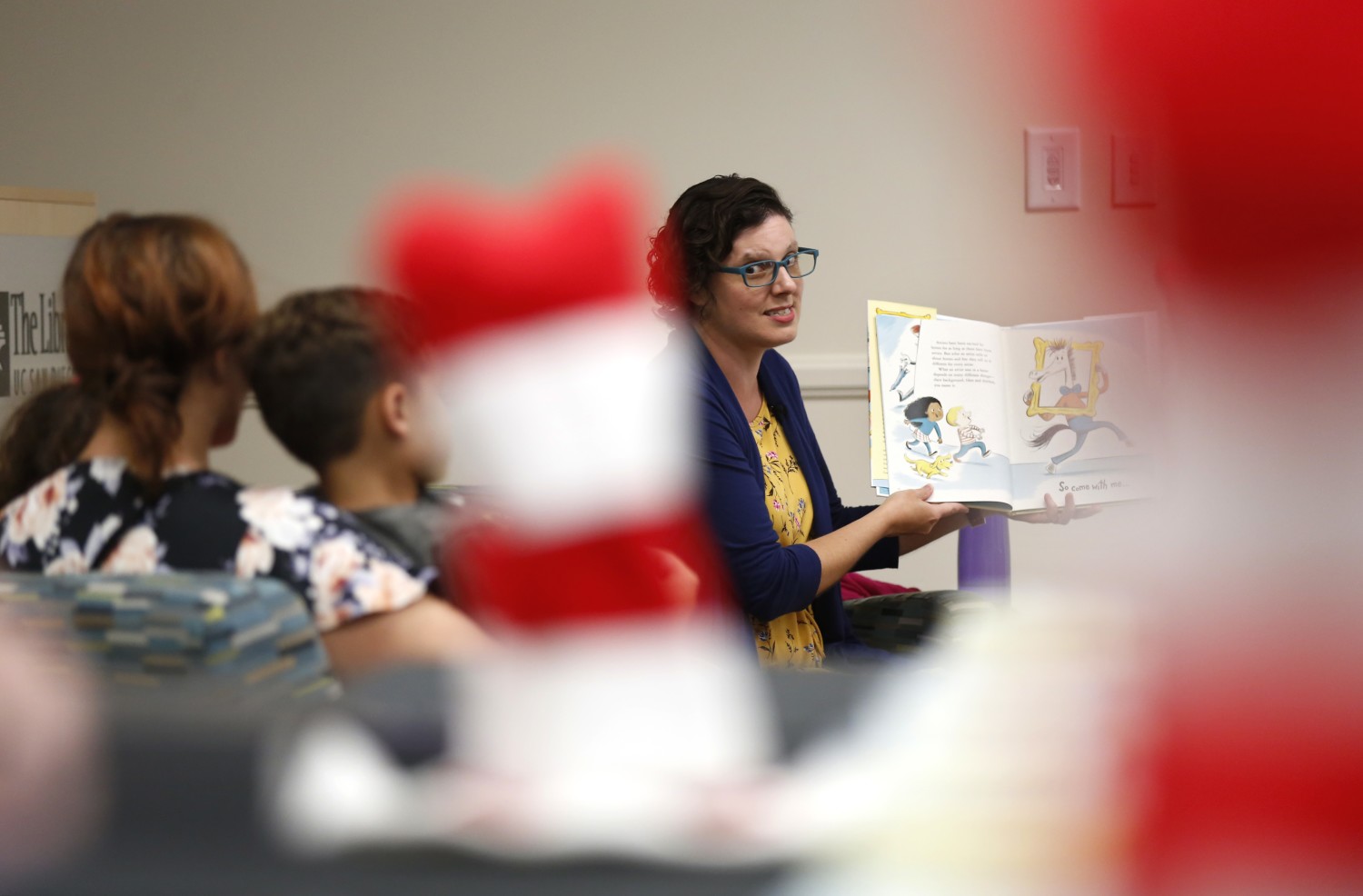 On Tuesday, “cancel culture” was officially promoted to “outlaw culture,” which definitely would sound way cooler if it weren’t so maddeningly ridiculous and offensively dangerous.

The upgrade came courtesy of California’s own Rep. Kevin McCarthy (R-Bakersfield). Arguing against a Democratic measure to expand voting rights, the House minority leader was in the midst of accusing Democrats of wanting to strip states and counties of their ability to control elections when he added, apropos of absolutely nothing, “First they outlaw Dr. Seuss and then they want to tell us what to say.”

What Dr. Seuss has to do with voting rights is nothing at all. Like so many conservatives these days, McCarthy was just randomly shoving the notion of cancel culture into the mix to get his compatriots all riled up.

McCarthy could have been referring to President Biden’s failure to name-check Dr. Seuss in his Read Across America Day proclamation. Coinciding with the author’s birthday, Read Across America Day was for many years a joint enterprise with the National Education Assn. and Dr. Seuss Enterprises, but that partnership ended in 2018 and a year later, the Seuss brand was dimmed somewhat by a 2019 study that found the humans in his books to be overwhelmingly white; those who were not were often depicted in a racially disparaging manner.

Likewise, McCarthy might have been referencing false reports that public schools in Virginia’s Loudoun County had banned the books of Dr. Seuss, which they had not.

Most probably the reason McCarthy decided to throw this “first they came for the Cat in the Hat” bomb into his argument regarding voting rights was the announcement Tuesday by Dr. Seuss Enterprises that it would no longer be publishing six of the author’s less popular books because they contain offensive racial depictions.

It is possible that McCarthy genuinely cannot imagine a world without brand new editions of “And to Think That I Saw It on Mulberry Street” or “If I Ran the Zoo,” but there is no denying that the illustrations in those books of a Chinese man and two African men, respectively, are horrendously racist.

There is also no denying that none of the recent Seuss-related developments could in any way be considered “outlawing Dr. Seuss.”

Honestly, it is a tiny bit worrisome when an actual lawmaker so obviously does not understand the definition of the word law. Dr. Seuss Enterprises is legally entitled to do whatever it wants with the books it controls, just as the NEA is legally allowed to list whatever books it chooses for Read Across America Day. Read them or don’t read them; no one is going to get arrested for clinging to a copy of “If I Ran the Zoo.”

In terms of literacy promotion, I don’t think anyone in the world needs to be reminded on a yearly basis that “The Cat in the Hat” and “Green Eggs and Ham” are childhood classics. Which, for the record, no one is denying.

McCarthy was not the only conservative to deploy Dr. Seuss, who publicly regretted his early works that involved racist or cultural stereotypes, as the latest weapon in the right’s ongoing battle against “cancel culture.” This is a fight that many Republicans are blatantly promoting as the best way to reclaim power, so of course the good folks at Fox News were happy to weigh in. During several conversations there, Biden was accused of trying to “erase” Dr. Seuss from the literary lexicon (per impossibile) and liberals in general were repeatedly condemned for banishing Seuss to a cultural gulag alongside Mr. Potato Head (recently renamed Potato Head), “The Muppet Show” (to which Disney+ recently added an offensive-content disclaimer for a handful of episodes), Aunt Jemima (the brand now known as the Pearl Milling Company) and, one assumes, Little Black Sambo (rewritten, re-illustrated and renamed several times).

While Barack Obama once warned of an overzealous “cancel culture” and many liberals signed the infamous Harper’s letter, no one these days loves the phrase more than conservatives, who use it as a one-size-fits-all label for what they consider the left’s ongoing attempt to strip “America” from “American.”

Which honestly tells you all you need to know about what certain conservatives consider “American.” The right to be openly racist, obviously. I mean, what’s wrong with whipping up a batch of pancakes from a box that features a smiling Black woman, named and accessorized in a way to evoke a racist stereotype? Who doesn’t like pancakes?

What’s wrong with having a few illustrations of random Asian characters with lines for eyes, wearing conical hats and carrying bowls of rice, or of African men who look barely human, sprinkled throughout a children’s book? It’s not like kids learn how to view other people and the world around them through books or anything. They learn from their parents, and if their parents believe that “inscrutable” is a perfectly legitimate way to describe an Asian person, or that no truck is complete without a flag symbolizing the attempt by certain states to destroy this country in the name of preserving slavery — well, freedom of speech is in the Constitution.

And as long as the cancel-culturistas are on the subject, what’s wrong with saying the n-word, in certain contexts arbitrarily determined to be appropriate by white people who want to say it? Some guy at the New York Times apparently was forced to leave because he said it, after one of the rich high school snowflakes on some expensive Times-sponsored trip asked a question referencing the word. And while working for the liberal media is pretty inexcusable, ousting the guy doesn’t seem fair at all. It’s just a word, isn’t it? Black people use it all the time — and if Black people can use it and white people can’t, well, that’s just another form of racism.

First they outlaw Dr. Seuss and then they tell us what not to say.

Look, I am a white person raised in the United States of America, albeit by fairly liberal parents, and I can say from personal experience that it is very hard and disappointing to realize that beloved books, music, movies and brand packaging once considered perfectly acceptable were and are in fact racist, sexist, homo/transphobic or otherwise offensive. That many of these “classics” were and are tools used, intentionally or unconsciously, to reinforce stereotypes that have allowed one group to dehumanize and dominate other less powerful and less privileged groups in many ways and for far too long.

I loved “And to Think That I Saw It on Mulberry Street” as a child, and though I can’t remember noticing the Asian character in it, that’s probably because, unfortunately, offensive caricatures of all sorts of people were considered perfectly normal when I was a child … and a teenager … and a young adult. The Asian character, or the African ones in “If I Ran the Zoo,” didn’t register because their portrayals were consistent with much of what I saw in the culture around me. A culture that was just beginning to realize that pickaninny dolls and “Whites Only” signs were not only unacceptable but two facets of the same problem.

It’s disturbing and mortifying to realize that those Butterfly McQueen-as-Prissy imitations I did as a child were completely and horribly racist, or that Charlie Chan, whom I also adored, was a double-edged sword. Yes, he was one of a very few Asian characters allowed to be a hero lead, but only when saddled with a welter of stereotypical traits. Turns out that “Ah-so, number one son” is not something Chinese people actually said; who knew? Well, every Chinese person in America, for starters.

But being embarrassed or feeling threatened or deprived of a beloved object when the offensiveness of certain images, stories or words is pointed out doesn’t give you an excuse to perpetuate or even defend them. Neither embarrassment nor that kind of deprivation is on par with the pain of living in a society that continually presents demeaning versions of people who look like you. Failing to realize that something you enjoy or take for granted is racist doesn’t necessarily make you a racist; but doubling down and getting all defensive after this racism has been pointed out — well, now, in the words of my faith, you are sinning with full knowledge of the sin.

So why do so many Americans remain deeply committed to preserving words and images and symbols that inarguably are associated with forces bent on preventing millions of their fellow citizens from living freely and equally as Americans?

No doubt some actually believe the stereotype, or think it’s funny and harmless and that “those people” just need to get a sense of humor. Some may be simply unwilling to let the needs of others modify their behavior in any way, and some may be lashing out at a rapidly changing culture with whatever tool is handy.

But if you’re willing to die on the hill of the line-eyed, conical-hat-wearing Asian guy in “Mulberry Street,” you really need to ask yourself why. And don’t say you’re protecting the legacy of Dr. Seuss, because the people whose job it is to protect the legacy of Dr. Seuss made the decision to retire that depiction.

Too often, the term “cancel culture” is simply a way to short-circuit arguments that would involve defending the indefensible, a sleight of hand that shifts criticism away from an offense to those who find it offensive. Don’t see this as Dr. Seuss Enterprise attempting to acknowledge the potential pain caused by racist images in certain books, see it as the liberal mob attempting to cancel “One Fish, Two Fish” and everything else this country once held dear.

The cry of “cancel culture!” is too often used as a trip-wire response to combat any suggestion that our culture has not yet fulfilled its founding precept that “all men are created equal” with schoolyard taunts of “you’re just a crybaby” and “you can’t tell me what to do.”

First they dragged Dr. Seuss into an argument against voters’ rights and then they told us that we could not object to what they were saying.

In other words, the only person who attempted to “erase” Dr. Seuss this week was Kevin McCarthy.